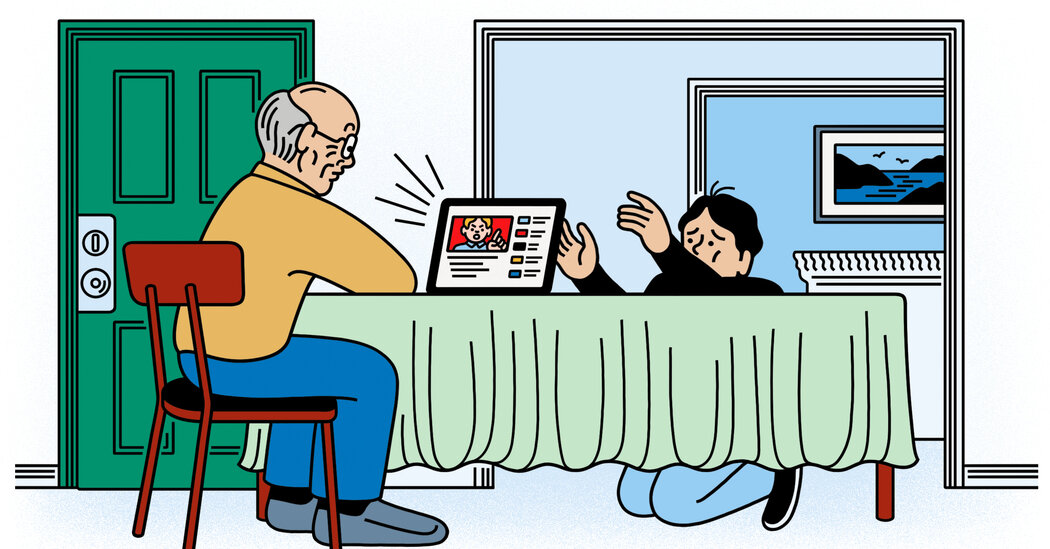 For nearly his entire life, my 80-something-year-old father has been a quiet, gentle and deeply religious man who went to Mass and said the rosary daily. Although his political views have always been conservative, he has also always believed in kindness and fairness. Since the start of the pandemic, his social interactions have become severely reduced, limited to daily calls from me (I live across the country), weekly visits from my brother and the occasional shopping trips and church attendance. As our mother passed away before the pandemic, his one loyal companion has been his iPad and YouTube. Because of his viewing of religious programs, YouTube has increasingly steered him toward conservative media, so that he is now obsessed with right-wing extremist politics and is absolutely against taking the Covid vaccine. Every time my brother or I have a conversation with him, he talks politics and pushes his views, and even after we asked him to stop, he tries to get the last word in by sending us angry emails or texts. Now both of us try to avoid having any interactions with him. I have the password to his YouTube account from a year ago when I helped him with a tech problem. In order to preserve our relationship, I’m thinking about going into his account to delete and pause his viewing history, and perhaps put in some links to more wholesome entertainment such as music and soccer to counter the constant bombardment of extremism. My justification is that if he is being brainwashed by an algorithm, then I might as well use the algorithm to steer him back to his old self so that we can at least have a normal conversation. What is your view on this? Name Withheld

The phenomenon you’re describing has been widely discussed and reported on, including in this publication. There’s widespread concern that YouTube’s recommendation engine has had the unintended consequence of radicalizing certain viewers by offering them progressively more inflammatory takes on political, or politicized, topics. (YouTube says it has made adjustments in recent years to favor trusted journalistic outlets over sources of what it calls “borderline content and harmful misinformation.”)

So I understand the temptation. I’d certainly be tempted to modify the feeds of a few people I know — and yes, they probably return the sentiment. But let’s be clear: You are considering treating your father as no longer competent to manage his own viewing. (You’re not simply proposing to send him scientifically sound links about vaccines, say.) You don’t suggest, though, that he suffers from the cognitive or psychiatric problems that would justify such treatment. Indeed, if YouTube’s recommendation engine can have bad effects on putatively normal people, the fact that it has had an adverse effect on your father isn’t necessarily evidence of impairment.

At the same time, your father doesn’t seem to realize how alienating his behavior is. Rather than manipulating him in the way you propose, you might make him face up to the choice he actually faces: He either stops talking about this stuff with you, or you’ll stop spending so much time with him. You value your relationship with your father. But it’s only truly valuable if he values his relationship with you as well.

One of my wife’s friends of longest standing has been engaged with a cult. While it initially looked like a quirky pseudoreligious encounter, she is now exhibiting quite concerning behaviors, steeped in conspiracy theories. She has two children with her ex-husband: an older child who decided to live with the father, and a younger child who, when we last saw them, behaved strangely, acting out characters of what her mother called previous lives. We thought at first that this was a comedy act, but it turned out to be serious! Part of the belief system is a strange relationship to food and nutrition, and the child looked pretty slim, bordering on malnourished. The cult itself practices certain procedures that look sexually abusive to us, cloaked in the mantra of alternative healing.

My wife feels that she cannot keep up this friendship anymore; it is draining, especially with the insistent preaching about the cult, which borders on the emotionally abusive. I would go a step further, given our friend’s latest post on social media, and call her a fascist. The question for us is how can we ensure that her child is safe, and whether terminating contact would result in both the friend and her child being dragged deeper into this cult, one that seems increasingly abusive and isolating? Name Withheld

Given your worries, you should certainly contact the child’s other parent. You could also contact the local authorities responsible for his or her welfare, who could conduct an examination. Of course, your worries are not limited to straight out abuse and neglect. You think that this child is being indoctrinated into a community and a belief system that are out of touch with reality and psychologically abusive.

Cults are a tricky subject in the liberal-democratic tradition. The beliefs of most religious traditions look strange from the perspective of those in other traditions or none. So, within broad limits, liberal societies have decided to leave religious upbringing to families, while supporting the ability of adults to exit such communities. That’s the right balance, I think, but those of us who believe in this liberal solution must acknowledge that it doesn’t always work very well for people reared in ways far from the local norms. They may be ill-prepared for the society outside their group, even putting aside the significant burden of dislocation and the loss of friends and family.

We can regret features of these belief communities while fearing highly intrusive state policies more.

But many occult organizations need not be accorded the deference normally given to religions, because they do not ask for it. The group you’re describing sounds as if it has debts to certain theosophist teachings. Yet latter-day esotericists often define themselves not in religious but in therapeutic terms, as offering techniques for healing or meditation, and making health claims for their practices and prescriptions. As the previous letter suggests, there can certainly be alternate systems of belief — vide the esotericism of QAnon — that aren’t constituted as religions, and some prove both all-consuming and deeply concerning.

Again, however, there’s a reason that we collectively give such groups wide latitude, as we give people wide latitude in their parenting choices. We can regret features of these belief communities while fearing highly intrusive state policies more. Outside the reporting of what child welfare officials would consider actual endangerment, you and your wife are, as individuals, further limited in what you can do. Your wife is hardly obliged to maintain a relationship she finds onerous; but if you think that, through gentle suasion, you could be helpful by staying in touch, by all means do so. Just bear in mind that it is an ethical demerit when our dealings with other people — even those with disturbingly mistaken views — are simply manipulative.

Kwame Anthony Appiah teaches philosophy at N.Y.U. His books include “Cosmopolitanism,” “The Honor Code” and “The Lies That Bind: Rethinking Identity.” To submit a query: Send an email to [email protected]; or send mail to The Ethicist, The New York Times Magazine, 620 Eighth Avenue, New York, N.Y. 10018. (Include a daytime phone number.)