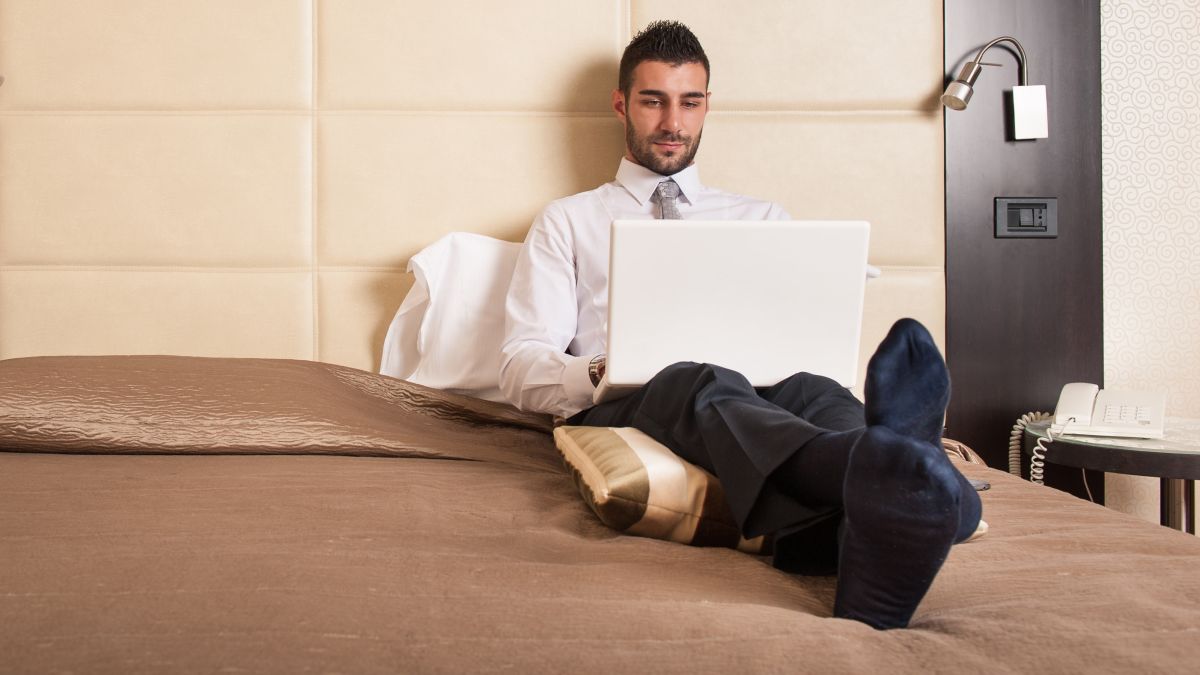 Tech 911Tech 911Do you have a tech question keeping you up at night? We’d love to answer it! Email [email protected]fehacker.com with “Tech 911” in the subject line.

Even though none of us should be traveling right now, there are still plenty of people who want (or need) to get away from their home base. I start there because it feels a little weird answering a hotel-related tech question in this week’s Tech 911 while we’re in the middle of yet another COVID spike.

But sure, someday we’ll travel again. And when you do, you might find yourself wondering the same thing as Lifehacker reader Janice:

I have a weird question: I do have a VPN, so that’s good. But when I go to connect to the Hilton wifi for instance, I see a long dropdown of other people in the hotel and they all seem to have secure wireless. How did they get that? Are the names that appear on the dropdown menu with the lock next to them people using their cellphones for connectivity?

Hotel wifi is a plague

From a security standpoint, hotel wifi is a nightmare. And even from a simpler “I would like to connect to the internet like I do at home” standpoint, hotels are still a nightmare. The connection speeds tend to range from impossibly slow to “a 14.4K modem doesn’t very threatened.” And that’s assuming you can even get a reasonable connection at all from your room—inevitably the one that’s just a wee bit out of the range of the wifi and feels like its wallpaper has a lead lining.

I can’t remember the last time I had a great experience with hotel wifi. Nor can I remember the last time I wasn’t terrified for my less tech-savvy travel companions. You know the ones: They’ll connect up to any open network that’s available because they want to watch a YouTube video now. Or, worse, they’ll just guess which is the hotel’s wireless network from the open options available. These people, of course, have no idea what a VPN is, nor why it’s critical they use one when connecting to any open wireless network.

A word on that. While it’s absolutely great that you’re using a VPN to keep your device safe when connection to an open wireless network, you can even go one step further. When you connect to an open wireless network, odds are good that your device does something before your VPN fires up—as soon as you’ve used the hotel’s portal to authenticate into your wifi, it might quickly hit up your email services now that it knows it’s online; your cloud software might try to sync a file; your browser might load all the websites you had open in your tabs.

“…I turned off PIA [a VPN] while monitoring my Wi-Fi connection from another computer with Wireshark. Immediately after disconnecting, I was able to see that my phone was running Signal messenger, was on the AT&T network, and was currently watching a YouTube video just from DNS requests. I can even identify the VPN checking in with its update server. All of this information was leaked in a few seconds of sniffing traffic without using a VPN.”

To get around this problem and ensure you’re operating in the most secure fashion possible, it’s recommended that you use your cellular connection whenever possible. Does this come with its own drawbacks? Absolutely. Here’s hoping you’re on an unlimited data plan, first of all. Second, you’ll absolutely want to keep your phone plugged in and charging while you’re doing this. And third, make sure you turn off your personal hotspot when you’re done. No sense leaving that on unless you love draining your battery for no reason.

And this brings us to your answer. My suspicion is that this is the reason for the many wireless networks you’re seeing: Other hotel guests have left their wireless hotspots on, whether they did so intentionally on their phones, or they simply didn’t realize their computer’s hotspot function was switched on. There’s also the rarer-but-not-impossible idea that someone is using a travel router or a regular router in their room to connect multiple devices at once—like the Chromecast they lugged on their trip. There’s also a chance someone shady is creating an open network and trying to sucker unsuspecting rubes into connecting to it.

You’ll probably see the same, overwhelming number of wireless networks in any place where people congregate in huge quantities, especially if they’re trying to get work done: the airport, a thriving coffee shop, a commuter train, etc.

I wouldn’t worry about it. While your hotel’s wireless connection might not be secure in the slightest, your use of a VPN is one of the absolute best things you can do to ensure security in an otherwise problematic situation. And even if all you do is use a VPN, and you are diligent about confirming that your internet activities are always going through said VPN, you’ll probably be fine.

I still wouldn’t do things like access my bank account on hotel wifi unless I really had to—and I’d probably use a hotspot if I needed to get something done on my work laptop or if I knew I had a lot of background services itching to fire up the second they sense a connection.

But as long as you have that VPN ready to go the moment you’re online, you’re already many steps ahead of most normal people. In fact, your VPN client might even come with an option that blocks your network connection unless you’re connected to the VPN—an even better option to ensure as little as possible leaks out over an unsecured connection.