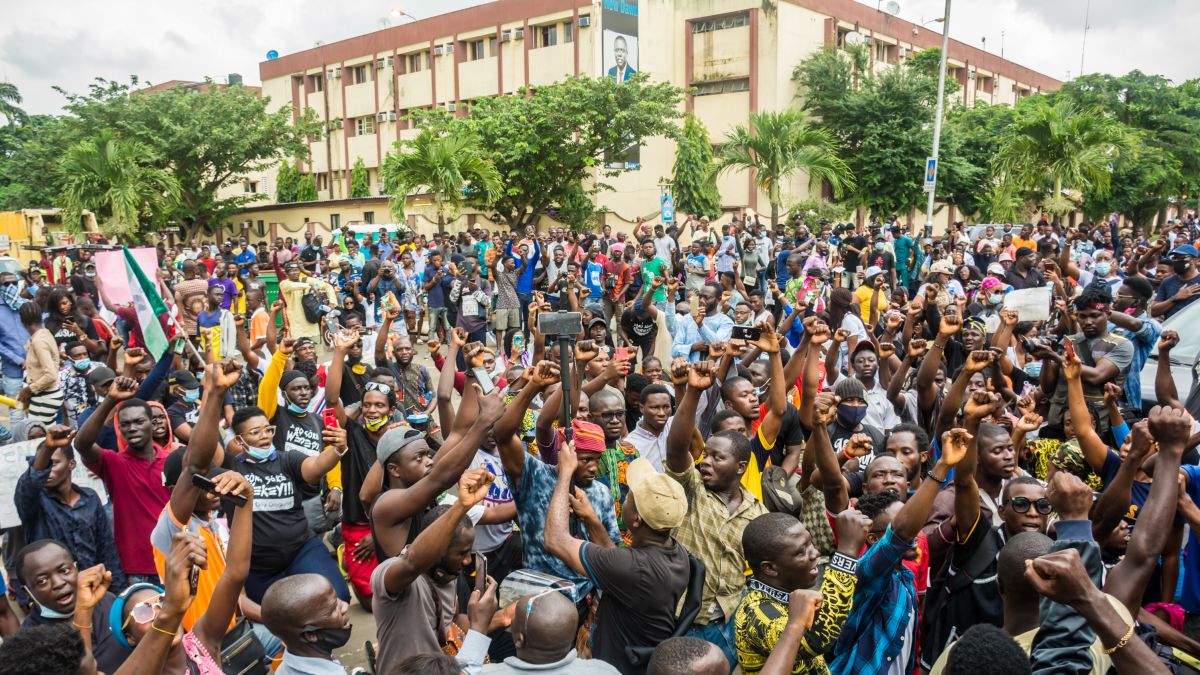 After a summer of ongoing protests over police violence—including the murders of George Floyd and Breonna Taylor—greater numbers of Americans are starting to understand this facet of systemic racism. Of course, it’s not only an issue in the United States, and over the past two weeks protests in Nigeria over police brutality have themselves turned violent at the hands of the country’s military. Here’s what you need to know about the demonstrations and what you can do to support the protesters.

Why are there protests in Nigeria?

The most recent round of protests in Nigeria began in early October have called for the ban of the Special Anti-Robbery Squad (SARS), a police unit with a long association with violent harassment, the Wall Street Journal reports. SARS was formed in 1992 and tasked with dealing with Nigeria’s violent crimes, like murder, kidnapping, assault, and armed robbery. In reality, the unit has only added to these problems, and has faced allegations of violence against civilians, including rape and murder.

The #endSARS campaigns began in 2017, and while the Nigerian government has announced that it would be making changes to the unit—both in 2018 and 2019—that hasn’t happened yet. Then, on October 4, 2020, a Twitter user posted video footage that they claimed featured a SARS officer shooting and killing a young man, sparking the protests this month.

On October 11, Nigeria’s inspector general of police announced that SARS would be disbanded, but again, no action has been taken. According to CNN, some of the protesters have made it clear that they would continue to demonstrate until the entire police force is reformed, including independent oversight and psychological evaluation of officers.

What’s going on at the protests?

Many of demonstrations over the past few weeks—particularly those in Lagos, the capital of Nigeria—have resulted in violence, including several protesters being shot dead by members of the Army, eyewitnesses told CNN. According to a report from Amnesty International, at least 56 people have died across the country since the protest began.

Approximately 38 protesters were killed on October 20 alone, and hundreds more severely injured when “the Nigerian military opened fire on thousands of people who were peacefully calling for good governance and an end to police brutality,” per Amnesty International. And as CNN reports, the Nigerian Army has dismissed reports of violence against protesters—including instances where they were shot dead—as “fake news,” and declined further comment.

With protesters who plan to keep demonstrating until the government actually implements its promised police reforms, and military violence seemingly being the way the Nigerian government is handling the demonstrations, there is no clear end in sight to these clashes.

How to help the protesters in Nigeria

Given that most people—even outside a global pandemic—wouldn’t be in a position to fly to Nigeria and join the demonstrations in person, you may be wondering how you can support the cause from afar. In an article from Global Citizen, Akindare Okunola provides a few suggestions:

Though we have no shortage of our own problems in the United States, Okunola says that it’s important to pay attention to what’s going on, getting information from a trusted source:

Reading this is a good start. There are also explainer videos that can help.

#Activism gets a bad rap when some people, companies, and organizations use it as a method of virtue signaling, but in situations like this one—when the action is taking place far away and could use additional awareness—Okunola says that it can be a valuable tool. Not sure where to start? Okunola has a few suggestions:

Easily shareable broadcast templates and fliers in several local languages have been created to further amplify the message; and a flyer showing the five requests activists want to see met are some ways to get a headstart on sharing what is going on across all social media platforms.

Widespread protesting isn’t cheap, and so if you have the available funds, you might want to consider donating to one of the fundraisers set up to support those demonstrating through providing food, health and legal services, security, and other assistance.

According to Okunola, most notable of the main fundraisers have been led by the Feminist Coalition, which has raised more than 70 million Naira (about $180,000) in a wide range of currencies, including bitcoin. And, as always, do your homework before making a donation. For example, the Feminist Coalition is providing detailed, public reports on funds received and disbursed.