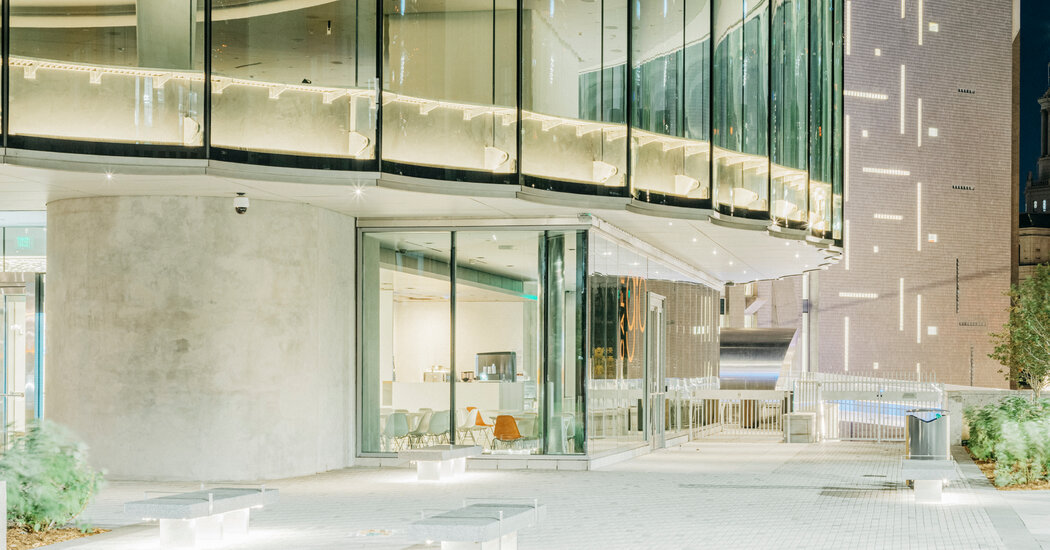 This article is part of our latest Fine Arts & Exhibits special report, about how art institutions are helping audiences discover new options for the future.

DENVER — What if an old art museum could start anew, empty the walls, clear the floors, take down everything that hangs from ceilings and sits on pedestals, and then put it all back together with present-day museum practices in mind? What would that look like in the 21st century?

For the Denver Art Museum, which spent the last four years renovating the seven-story tower it calls home, the result is a rare opportunity to see many of the ideas that contemporary curators value come together at once. The 102-year-old institution reopens its main headquarters today, 16 months behind a pandemic-rattled schedule but right on time with current trends.

Which is to say, with a significant shift in emphasis from 19th-century European to 20th-century global; an endorsement of fashion and furniture design as equal partners to painting and sculpture in the encyclopedic museum hierarchy; a comprehensive effort to be socially woke; and with a sincere invitation for visitors to get their hands on things.

DAM wants its 800,000 annual guests to be themselves — and see themselves — in the museum. It has spent $150 million rearranging the art but also bolstering interactive spaces, such as the “thread” studio integrated into its textile galleries, where visitors can practice their own sewing and knitting, and the design lab, where they can marvel at the museum’s modern sofas and lamps, then dream up their own home accessories.

Throughout every gallery, the emphasis is on the now with contemporary artists getting equal, or even top, billing alongside institutional classics. Visitors to the Asian galleries, for example, are greeted first by a recent and irreverent “Mao jacket” piece by the Chinese sculptor Sui Jianguo before they move on to DAM’s ancient treasures from Cambodia, Japan and India.

The museum boasts one of the country’s best collections of North American Indigenous art and it goes back centuries. But the new spin is current with works by contemporary contributors like Kent Monkman and Fritz Scholder positioned ahead of the traditional blankets and rugs.

“There are baskets and there is pottery and beautiful beadwork, but we really wanted to show the active peoples and tribes,” said the museum’s director, Christoph Heinrich. The museum added audience-activated kiosks that feature newly commissioned videos of Native Americans sharing stories about their heritage and identity.

DAM has tried to be responsive to the environment — its remodel is LEED certified — and also to its diverse constituencies. All signage and public messaging is in English and Spanish. Within the Indigenous galleries, there is a “calming room” so visitors whose trauma may be triggered by the artifacts have a place to work out feelings.

When the museum reinstalled objects, such as the monumental carved poles and ceremonial masks and weavings in its Northwest Coast collection, it worked with Indigenous leaders to hold rededication ceremonies recognizing their sacred value.

If DAM knows what its customers need, it also has learned what they want, and that would be high design — specifically from the 20th century. The museum has produced a string of special exhibits in recent years featuring work of haute couture names like Yves Saint Laurent and Christian Dior, and each has been a success, drawing large crowds and support from donors (including, just last month, an anonymous $25 million gift for textiles). As with other major cultural institutions around the United States, fashion has become a major focus and the museum has worked diligently, under the fashion curator Florence Müller, to build its holdings.

That effort is manifested in its reorganization. For a century, DAM’s textile galleries were focused on things like quilts, embroidery and Chinese robes, and those objects remain on display. But the spotlight for the unveiling falls on a Müller-helmed exhibition on the “feminine tailored suit” featuring many of DAM’s recent acquisitions.

DAM has placed a big bet on that fascination for the previous century in the new order. The photography galleries have been doubled and the architecture and design galleries expanded from the small pass-through hallway they formerly occupied into 11,000 square feet of open space. They are loaded with bent plywood tables, desk chairs and other objects made by the period’s top names, including the Colorado-connected Herbert Bayer.

In addition, the curator of architecture and design, Darrin Alfred, has assembled a special exhibition of home accessories by the architect Gio Ponti. The array of clever, forward-thinking dinner plates, flatware and side tables is meant to shore up the stature of the respected Italian designer, who died in 1979.

That exhibition might be seen as a strategic move on the part of the museum because its own reputation is wrapped up in Ponti’s; he also designed the structure it spent all that effort renovating.

Ponti’s building is a curious attraction. It was his only completed commission in the United States, and he made a show of it, shaping the place into two connected towers that some locals adoringly refer to as “the castle” and others deride as “the prison.” Ponti dotted it with only a few, narrow, rectangular windows and clad the rest in more than one million glass tiles that glisten in shades of gray and silver depending on the sunlight.

But it can appear imposing from a distance — and dull when the clouds are out. There is a reason so few museums are designed as high-rises: Tall buildings with relatively few windows can look austere and imposing. But that was the charge DAM gave the architect half a century ago when it hired him, according to the architect Jorge Silvetti, whose Boston-based firm, Machado Silvetti, directed the renovation.

“The building is not pure Ponti,” Mr. Silvetti said. “It’s not what he could have done, but what he did with what he got.”

Working with the local firm Fentress Architects, the design team labored to bring out the best in Ponti. It updated the building with new elevators and skylights, and increased exhibition space by inserting a floor into a two-story atrium creating a whole new upper room to show objects. Fulfilling Ponti’s original plan, it added an open-air deck on top. Visitors can now walk on the roof and take in spectacular views of the nearby Rocky Mountains.

Machado Silvetti also designed an addition, a two-story 50,000-square-foot “welcome center,” that allowed it to put its own stamp on the museum’s cultural campus, which also includes a 146,000-square-foot addition designed by Daniel Libeskind in 2006.

The welcome center, which will house ticket counters, two restaurants and meeting spaces, stands out for its elliptical shape and the floor-to-ceiling windows on its upper level, each a concave panel 25 feet tall and 8 feet wide. When lit from the inside, it glows like a lantern at night.

The new building will serve metaphorically as a beacon for art fans who have waited patiently for the institution to put its best wares back on display. DAM closed the Ponti building for construction in 2018 with plans to start reopening spaces in May 2020. The coronavirus forced a delay in the unveiling, which is expected to draw large crowds.

The content those visitors encounter may look familiar. There are some recently acquired objects in the remix, though DAM’s usual attractions — among them Western art with its Taos School superstars, and Latin American art, which covers four millenniums — remain largely the same. But it will all be displayed with a refreshed attitude meant to make every guest feel at home.