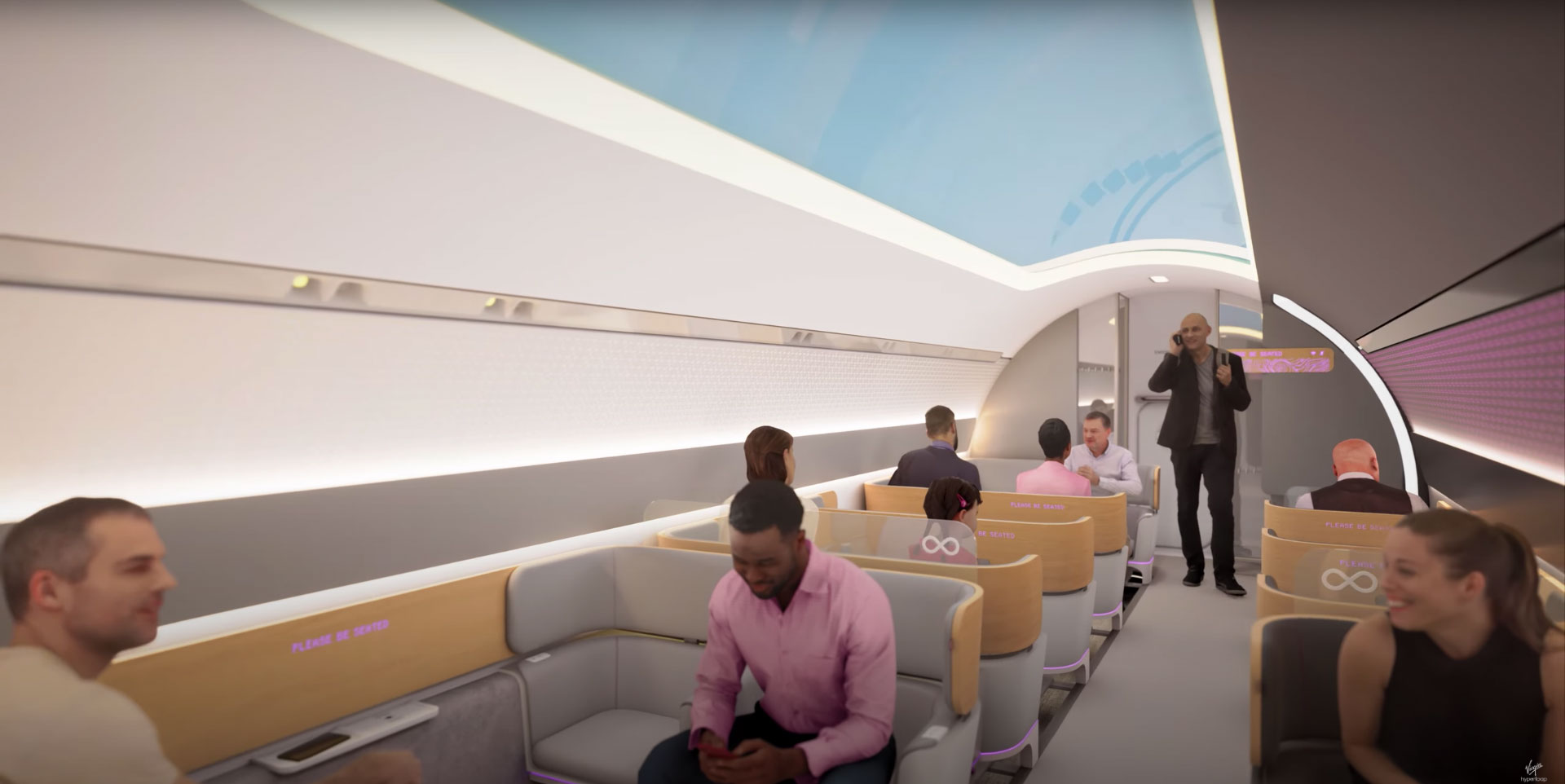 The company which, late last year, made the world’s first crewed Hyperloop journey is now proposing how its system will work in practice. Virgin Hyperloop has released a new concept video, explaining how would-be passengers will travel in its proposed system of vacuum tubes. The clip was created with a number of third-party companies, including Danish architecture firm Bjarke Ingels and industrial design firm Teague.

In the clip, a passenger plans to take a Hyperloop journey, with a ticker showing the next pod will be available in a couple of minutes. They enter the station and sweep up the stairs to a subway-esque platform, called a podbay, into which they board. A company spokesperson explained that the capsules themselves are always in a vacuum, reducing the need to airlock every capsule before it begins moving. The pod is collected by an overhead bogie, which then pulls out onto the main tube with several other pods — almost like a set of train carriages running in line.

The pods then zoom off and down the main Hyperloop line, while another capsule from an adjoining line crosses paths and over to another destination. “Our” train, meanwhile, is broken into its individual capsules and sent down individual berths ready to allow the passengers to exit. This happens at such speeds that it’s impossible to imagine the sort of switching technology that would be necessary to make this happen. The company says that rather than a physical switch, the magnetically-levitated sleds will be able to decide which track to take. And this will naturally be supported by the company’s proprietary technology.

This is the second time the company has released an ambitious video outlining its vision for how the system would work. The first, from 2016, was set in 2020(!) and imagined people walking to a Hyperloop station and entering a square pod. This pod would drive itself into a dock where it would join up with three others, entering a capsule which then sailed through the Hyperloop tube itself. At the other end, the pods would exit the capsule, leave the station, and drive themselves to the requested destination.

By comparison, this video is almost crushingly realistic in its look at how things would work should it get made. The self-driving road pods are ditched, and the stations now look like train-stations, albeit very fancy ones. Passengers enter through a gate line and go through a security scan, since for all the talk of a train-like experience, it’s likely that some form of security theater will be mandated.

The capsule’s cabin, too, looks much more like a train carriage with its row of seating in a 2-1 layout — and an in-capsule bathroom. The capacity in this render is 17, although the company has designed the pods to seat up to 28 at a time. It’s styled to feel like something created by Virgin’s designers, and even if it doesn’t look in any way like a Virgin Atlantic Upper Class cabin, it feels very much like it does. In addition, built-in Qi phone charging plates and seat-mounted countdown displays are the only visual clutter in the lounge-like pod.

One of the biggest criticisms leveled at Hyperloop is that it cannot hope to match or exceed passenger capacity on a regular train. The company says that the maximum capacity of each pod is 28, and by running them in groups, it’ll be able to “transport thousands of passengers per hour.” This is predicated on the company’s software being smart enough to maintain distances between each convoy, and each pod therein. Again, Virgin Hyperloop claims that its technology is smart enough to packetize capsules and keep the journey running at maximum capacity.

In a statement, company CEO Jay Walder said that despite the fancy styling, “if it’s not affordable, people won’t use it.” He added that “high-speed transport is currently not feasible for most people, but we want to change that notion.” The company cited a study from early 2020 suggesting that the price for a ticket would be comparable with the cost of gas when driving between two major metro areas.

Naturally, there’s a long road before these claims will be put to the real test, and the company is now aiming to run its first passenger operation in 2030.