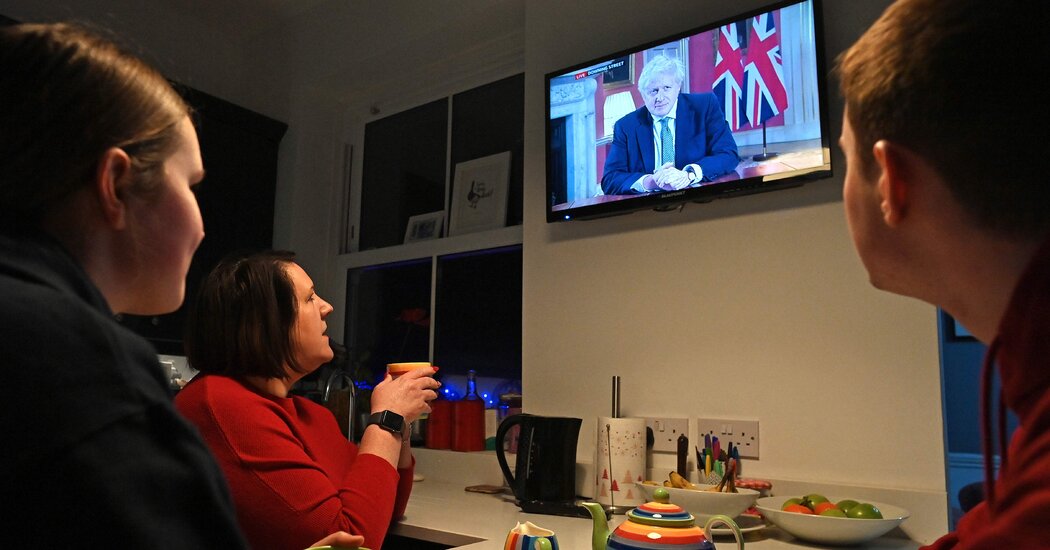 LONDON — Prime Minister Boris Johnson imposed a strict new national lockdown on Monday as Britain’s desperate race to vaccinate its population risked being overtaken by a fast-spreading variant of the coronavirus that was on track to overwhelm the nation’s beleaguered hospitals.

After several days of frighteningly high and escalating case numbers, Mr. Johnson ordered schools and colleges in England to close their doors and shift to remote learning. He appealed to Britons to stay at home for all but a few necessary purposes, including essential work and buying food and medicine.

The nationwide restrictions, officials warned, will remain in place until at least the middle of February.

The decision was a fresh setback for Mr. Johnson, coming at a time when the arrival of two vaccines appeared to provide a route out of the crisis after nine fraught months and fierce criticism of his handling of the pandemic.

On the day that the first doses of a vaccine developed by AstraZeneca and the University of Oxford were administered, the good news was drowned out by the reintroduction of the type of sweeping restrictions used last spring when the pandemic first threatened to run out of control.

In recent weeks, the new, highly transmissible variant of the virus has taken hold in London and southeast England, prompting an alarming spike in case numbers, to close to 60,000 a day, and putting hospitals under acute pressure.

On Sunday, Mr. Johnson acknowledged that the current controls on daily life were insufficient. But the first announcement of a full-scale lockdown came not from England but from Scotland, where the first minister, Nicola Sturgeon, has consistently moved further and faster to try to tame the pandemic.

Speaking in Edinburgh, Ms. Sturgeon said that people in mainland Scotland would be required to stay at home and to work from there where possible, while places of worship would be closed and schools would operate largely by remote learning.

Mr. Johnson followed on Monday evening to announce the lockdown in England that many had predicted was inevitable.

“It’s clear that we need to do more together to bring this new variant under control while our vaccines are rolled out,” Mr. Johnson said in a televised address.

Though the weeks ahead may be some of the hardest yet, he said he believed Britain was “entering the last phase of the struggle, because with every jab that goes into our arms we are tilting the odds against Covid and in favor of the British people.”

People in England were being encouraged to obey the new rules immediately, though some of the new restrictions will not be given legal force until Wednesday morning and there is likely to be a vote in Parliament, which is being recalled specially on the same day.

Ministers had been celebrating the deployment of the AstraZeneca vaccine, which is not only cheaper than the one from Pfizer-BioNTech but also much easier to store. They said it could help turn the tide in Britain’s battle against the virus.

But Britain is involved in a high-stakes race to roll out its mass vaccination program before its overstretched health service is overwhelmed by the new variant. Already, non-Covid treatment is being postponed, again, and images of ambulances stacking up in the parking lots of some hospitals last week illustrated the challenge faced by the country’s weary health workers.

The government has raised its Covid alert to its highest level for the first time, warning of a “material risk of health care services being overwhelmed.” On Monday, there were more than 26,000 Covid-19 patients in hospitals, an increase of 30 percent from the previous week, Mr. Johnson’s office said. And cases are rapidly rising across the country, it said.

Mr. Johnson has set an ambitious target for the country’s vaccine drive: administering a first dose of the vaccine to the most vulnerable segments of the population by the middle of February. If the government achieves that, he said, it could begin to lift restrictions.

Most Britons already face strict curbs on everyday life. Nonessential stores, pubs and restaurants are already closed in much of England, where those living in the areas under the toughest rules are barred from mixing between households.

Now, all parts of England will be under those curbs, and schools will be closed for most pupils.

Some restrictions, however, will be a little less onerous than those imposed last March, when the virus was marching unrelentingly through Europe and the country first locked down.

This time, people in England will still be allowed to meet one other person to exercise together outside, and places of worship will remain open, as will playgrounds. Elite professional soccer matches will continue, although some matches have had to be canceled lately after players were infected.

For critics, Monday’s developments illustrated Mr. Johnson’s tendency to postpone decisions until the last moment, in part to balance public health issues with the concerns of many in his ruling Conservative Party about the devastating impact on the economy.

On Sunday, after Mr. Johnson used a BBC interview to warn that new restrictions were likely, the leader of the opposition Labour Party, Keir Starmer, called for immediate new national restrictions.

But on Monday morning Mr. Johnson initially appeared to resist being forced into a quick decision, insisting, as he made a hospital visit, that the government was still measuring the impact of the toughest tier of restrictions already in place. He did acknowledge that there were “tough” weeks to come and said there was “no question” that harsher measures would be announced “in due course.”

Even within his own Conservative Party the pressure grew, with a senior lawmaker and former health secretary, Jeremy Hunt, writing on Twitter that it was “time to act,” and to “close schools, borders, and ban all household mixing right away.”

The essential lesson to be drawn from the handling of the pandemic was that “countries that act early and decisively save lives and get their economies back to normal fast,” Mr. Hunt said.

Medical experts said Mr. Johnson had little choice but to impose more draconian measures, given the rapid spread of the new variant. Some said the prime minister was already behind the curve, given how the number of cases and hospital admissions had skyrocketed in the last week.

“He’s already late,” said Devi Sridhar, head of the global public health program at the University of Edinburgh. “The situation is dire with the new variant. They have to manage borders, pause schools and stop mixing between households.”

The government’s own scientific advisory panel, known as SAGE, recommended on Dec. 22 that Britain consider a national lockdown, as well as closing schools and universities. It said that the variant was on its way to becoming dominant in many parts of the country.

New infections have surged to a rate of almost 60,000 a day, double the rate of a few weeks ago.

Hospital admissions have doubled in London every week since the beginning of December, Christina Pagel, director of the clinical operational unit at the University College London, wrote on Twitter. With 75,024 deaths, Britain already has the highest death toll in Europe, and medical experts warn that after growing more modestly over the summer, it will begin spiking again.

Others voiced concern over the constant changes in message from a government that has often appeared to be reacting to fast-moving events, rather than anticipating them.

After last year’s national lockdown, the government promised to do all it could to keep schools open. But the return of students on Monday after the winter vacation was plunged into confusion as some schools in areas where infections were high were asked to close, while some head teachers decided to do so on their own. In some cases that was because too many staff members were sick, in others it was after reports that children could be more vulnerable to the new variant than to the original virus.

One teaching union called for all primary schools to move to remote learning for the first two weeks of January except for classes that cater to vulnerable children and the families of key workers.

After days of chaos over the school policy, Mr. Johnson on Monday reluctantly and belatedly fell into line with that suggestion.

“Parents whose children were in school today may reasonably ask why we did not take this decision sooner,” he said, adding that “the answer is simply that we have been doing everything in our power to keep schools open.”