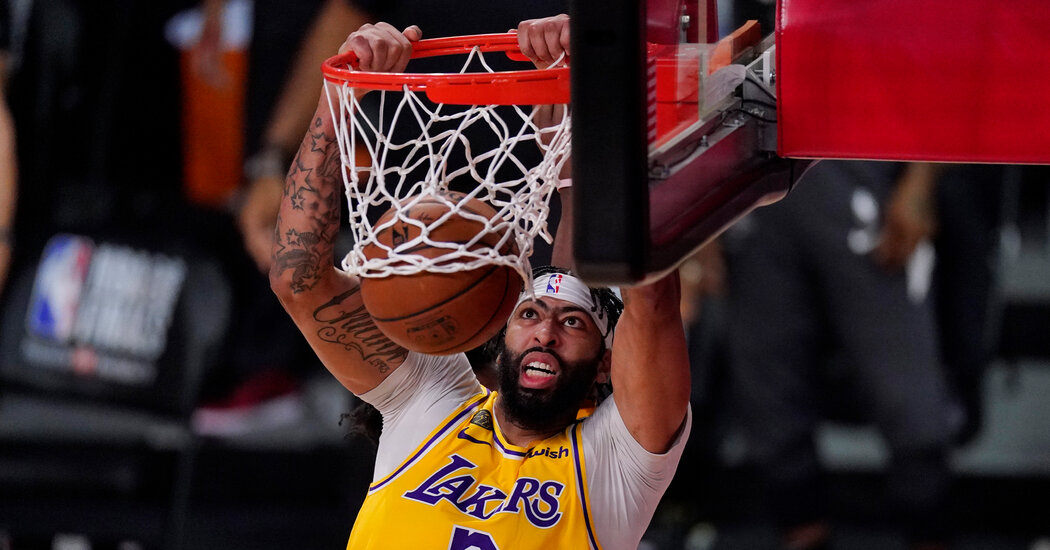 Remember when all there was to watch was South Korean baseball and cherry-pit spitting?

Those times appear to be over. Nearly every sport has returned, creating a schedule unlike any we’ve seen. Multiple leagues are attempting to close out virus-interrupted seasons, while other leagues try to start new ones safely.

For sports fans who were hungry for action for months, this feast may never come again.

The past month has been packed, but the week just completed might have topped it all for quality and quantity.

Paris in the springtime? Not exactly. The French Open got underway in the unfamiliar weather of late September: drizzle and a chilly wind on opening day. Also new were a retractable roof and lights, and a short turnaround from the United States Open, just two weeks. Ouch.

In European soccer, Bayern Munich, which lost only four times in each of the last three seasons, lost in only its second game of the new one, by the improbable score of 4-1 to Hoffenheim. And Somerset, waiting since 1891 for its first English four-day cricket championship, lost to Essex in this year’s final.

You keeping up here?

The Tampa Bay Lightning lifted the Stanley Cup three months late after a 2-0 victory over the Dallas Stars gave them a 4-2 series win. With 10 postseason goals, Lightning defenseman Victor Hedman was named the playoffs’ most valuable player.

“Monday Night Football” put up one of the best matchups of the season as the Super Bowl favorites, the Kansas City Chiefs and the Baltimore Ravens, and their star quarterbacks, Patrick Mahomes and Lamar Jackson, faced off. The Chiefs took a step toward a potential Super Bowl repeat with a comfortable 34-20 win.

Plus: In cricket, Bangalore needed an extra over to beat Mumbai after the game finished with the highest tied score in Indian Premier League history.

The baseball playoffs — expanded to 16 teams! — started with four games. The action was topped by the Yankees crushing the best pitcher in baseball this season, Shane Bieber of the Cleveland Indians, 12-3, and the Minnesota Twins falling to the Houston Astros and extending their postseason losing streak to a mind-boggling 17 games.

On Monday, Serena Williams beat Kristie Ahn, 7-6 (2), 6-0, at the French Open. On Wednesday, Williams withdrew because of an Achilles’ tendon injury. The matches continued.

A quadruple header of playoff games not enough? How about an octuple header?

This baseball bacchanalia resulted in three teams being eliminated from the unforgiving best-of-three format: the Toronto (Buffalo) Blue Jays, the Indians and, yes, the Twins, who tallied consecutive playoff loss No. 18. It took the Atlanta Braves 13 innings to beat the Cincinnati Reds, 1-0, the longest any postseason game has ever stayed scoreless.

The Los Angeles Lakers hit a rash of 3-pointers to defeat the injury-plagued Miami Heat in Game 1 of the N.B.A. finals, 116-98. Anthony Davis had 34 points, and LeBron James added 25 points, 13 rebounds and 9 assists.

Liverpool played Arsenal for the second time in a week after defeating it, 3-1, on Monday in the Premier League. The rematch, in the League Cup, ended in a 0-0 draw, but Arsenal advanced on penalties.

Just four baseball playoff games, but all of them were potential elimination games. We said goodbye to the Chicago White Sox, the Cincinnati Reds and the Milwaukee Brewers.

The W.N.B.A. finals began with the Seattle Storm beating the top-seeded Las Vegas Aces and their transcendent star A’ja Wilson, 93-80. Sue Bird had 16 assists, a finals record. The Lakers took a 2-0 lead over the Heat in the N.B.A. finals entering Game 3 on Sunday night. James had 33 and Davis 32.

Plus: The Penrith Panthers edged the Sydney Roosters, 29-28, in the National Rugby League playoffs.

Major League Soccer threw out 12 games, starting in the afternoon and extending past midnight on the East Coast. In the marquee game, between Cup contenders, Toronto F.C. rallied from a goal down to beat the Philadelphia Union, 2-1.

Postponed from May was the Giro d’Italia, held after the Tour de France for a change. Filippo Ganna won the first stage.

The action didn’t slow down. Manager José Mourinho of Spurs, who got revenge on his former team Chelsea on Tuesday, sought more on Sunday, and beat another former team, Manchester United, 6-1, in the Premier League.

Tom Brady, in his unfamiliar Buccaneers uniform, helped beat the Los Angeles Chargers, 38-31, in the N.F.L. NASCAR raced at Talladega. The N.B.A. finals moved to Game 3.

Plus: You know what? Never mind. Maybe catch a movie instead.