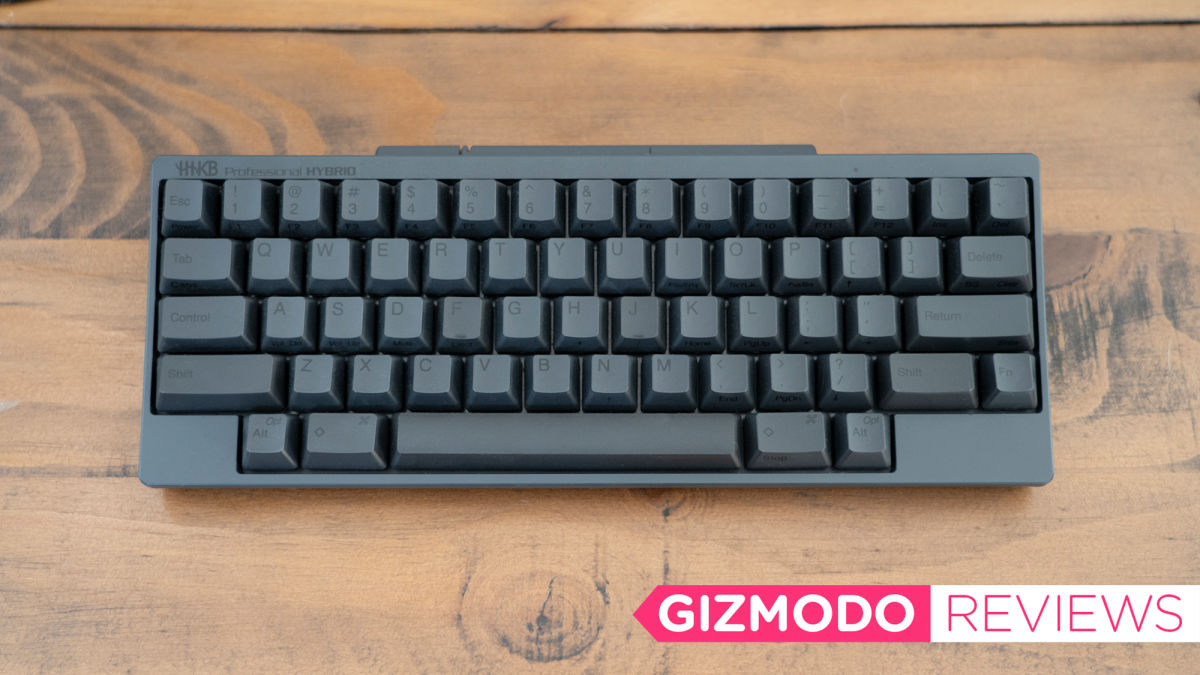 I know you’re going to say I am talking out my ass and wrong in every form and fashion, but you need to know that I have found the perfect keyboard—the platonic ideal of keyboards. And it only costs $337!

My mother once berated me for an entire 30-minute car ride home after I spent $200 on a Magic Knight Rayearth DVD set at Suncoast, so I recognize that my grasp of what’s “worth it” can sometimes be skewed by my desire for wanting the things I want. I accept this. But the Happy Hacking Keyboard is already one of the most commonly recommended keyboards for “real” mechanical keyboard fans, and this new Bluetooth variant, the Happy Hacking Keyboard Hybrid Type-S simply takes all the very good things one loves about the HHKB, tacks on a great Bluetooth controller and USB-C, and produces something so sublime you might be able to forgive that absolutely obscene price.

The most luxurious keyboard your fingers will ever touch.

People who think $337 is too much for a keyboard.

Mechanical keyboards aren’t for everyone, and every person’s typing digits have a different sense of what is “good.” The HHKB uses the well-known and expensive Topre key switch that most mechanical keyboard enthusiasts cite as the most luxurious of switches. I didn’t want to believe them, because sometimes I worry the hype about key switches, like audio gear, is more about big words and snake oil than actual quantifiable differences.

But I’ve seen Jacob Alexander’smeasurements of Topre switches versus other popular kinds . I know there is a mechanical difference and distinct tactile quality to Topre switches that give them their legendary reputation, as well as make me covet them in all forms. Typing on a Topre keyboard is similar to the refreshing experience of typing on your first mechanical keyboard after years of plugging away on super shallow laptop keyboards, but every single day. It is supremely pleasant. The keyboard is noisy enough to give you that “I’ve spent inordinate amounts of money on a mechanical keyboard” pride while being soft enough to not send bosses and coworkers into your office in a fury (or through the video chat in a rage, the more likely scenario these days).

There’s a satisfying little bump as you press a key. It’s not the firm click you feel when typing on most mechanical keyboards. Instead, there’s a distinct roll to it. A feeling of increasing, gentle resistance, and then a smooth release. It’s almost like popping the really big bubbles in packing wrap, but without the unpleasantly loud pop at the end.

This is because the Topre switch is a hybrid switch made up of a large spring beneath a rubber dome. Keyboard enthusiasts will often joke that Topre fans are just weirdos who love a membrane keyboard—no better than the yahoos who buy the multitude of cheaper keyboards from Logitech, Dell, and the rest. I’m not sure I can tell them they’re wrong, as I am biased toward a Topre, but I can at least point to the Topre’s promised longevity versus a typical membrane keyboard. It’ll last longer and feel nicer to type on.

There’s a wide variety of keyboards for Topre fans to choose from. My daily driver at the office—which I have not seen since March—is a Leopold FC660 keyboard with Topre switches. What sets the Happy Hacking Keyboard apart is its small footprint. The HHKB is a 60% keyboard, which means there’s no row of function keys or a number pad, or even arrow keys. You get just the bare necessity keys. Many of the keycaps have an alternate assignment printed on their sides. Combine a press of one of those keys with the Fn key and you have a full-sized keyboard at your disposal with nearly half the footprint and number of keys. Fn and ;/: works as a left arrow key. Fn and ‘/” as a right arrow key. Fn and 1/! as an F1 key. You get the picture.

At first, it can feel annoying and overly complex. Isn’t the point of a keyboard to make things faster and easier? But you’re just dealing with a learning curve, that’s all. Soon the shortcuts become second nature and your fingers are flying. There’s a degree of elitism in using a HHKB that reminds me of how many of us approached Das Keyboards when they were first introduced. Das Keyboards notably don’t include labels on the keycaps, so unless you’re a talented touch typist you’d find yourself stumbling as you go and looking like a dumbass. Perfecting the use of a Das Keyboard was a badge of honor, and I think the HHKB caries that same silly cultural cache. But it’s much smaller and frankly looks nicer.

And the new HHKB Type-S carries things further by adding a USB-C port if you want to plug directly into the computer and a Bluetooth module if you want to be wire-free. While Bluetooth can be finicky (I’ve had plenty of issues with headphones and mice over the years) I’ve had zero issues after months of using the HHKB Type-S. Whenever I need to type I just press the power button and get going. It’s fast, reliable, and I haven’t had to change the batteries since I set up the keyboard up earlier this year. That’s what takes this from near-perfect, like the normal HHKB, to absolute perfection. It’s wire-free and flawless.

At $337, the HHKB Type-S isn’t cheap. It isn’t for people who want to dip their toes into the mechanical keyboard sea, or for people who need a number pad, six scroll wheels, four rows of macro keys and RGB lights. This is a purist’s keyboard. An elite jerk’s keyboard. This is the perfect keyboard. I’m never going back.