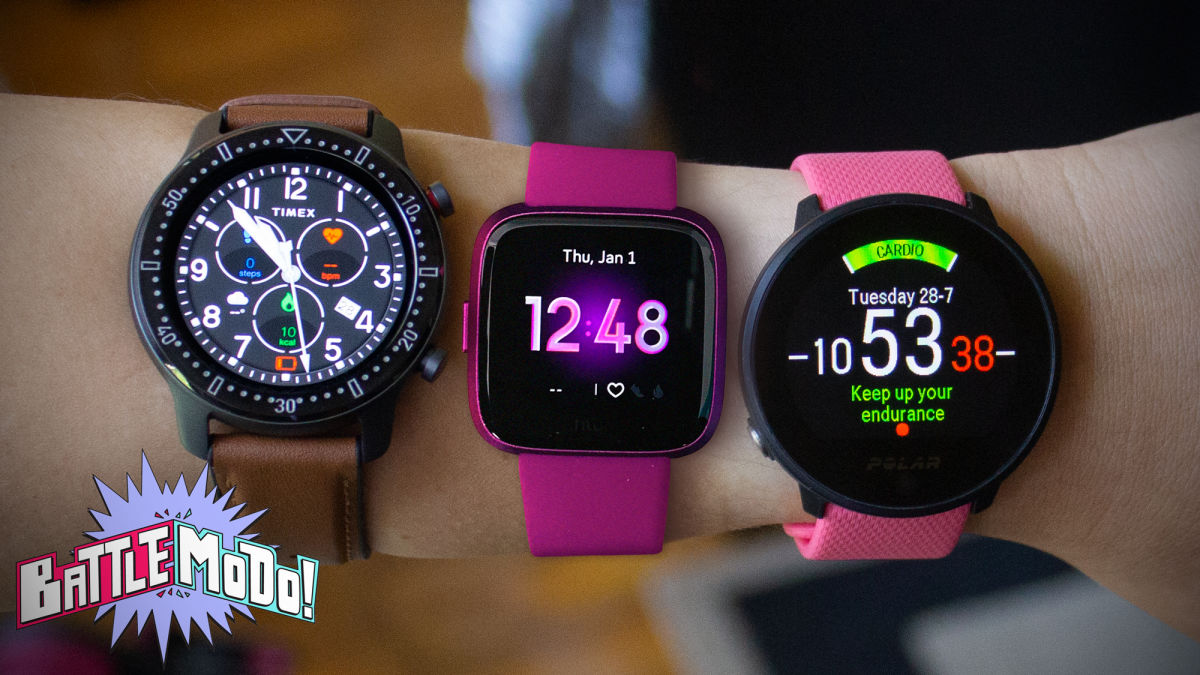 It used to be that smartwatches were a sort of “luxury” gadget. They couldn’t do as much as your phone, and frankly, didn’t offer much more than a much cheaper fitness band. Shelling out several hundred for one seemed like a waste of money.

But these days, there’s a heck of a lot more options for smartwatches under $200. Most sport a wide variety of sensors, including continuous heart rate monitoring, and some even tack on built-in GPS. Color AMOLED touchscreens are now pretty common in this price range, as is multi-day battery life, sleep monitoring, and activity tracking. And despite being budget smartwatches, many look much more expensive than they actually are.

And before you ask, no the Apple Watch Series 3 and Fitbit Versa 2 are not contenders here. They’re both excellent smartwatches, but they also retail for $200 and this Battlemodo is for watches under $200. Sure you can occasionally find these two watches on sale (in which case, you should snap those babies up), but we had to draw the line somewhere. When we say under $200, you should at least be able to buy that smartwatch, lunch, and maybe rent a movie.

There’s a lot of variety in this price category. What you get depends on whether you want a discounted, soon-to-be outdated version of a fancier smartwatch or one that was specifically designed to be a sub-$200 watch. For this Battlemodo, we’re focusing on smartwatches that fit into the latter and were released in 2019 or 2020. To keep things simple, we’ve also narrowed it down to the following three models: the Fitbit Versa Lite Edition, the Timex Metropolitan R, and the Polar Unite.

Watches—smart or otherwise—have always been at least a little about making a statement. If a watch is ugly or annoying to wear, it’s going to collect dust in your drawer. The good news is that none of these watches are hideous and all give you the option of changing up straps. However, each has its own flavor.

The Versa Lite Edition ($160) comes in some rather bold colors that are… let’s just say violently blue and purple. That’s true of the case color too, though there’s also a more understated silver version. Bright colors are great, except it can look a bit childish depending on the version you get. Also, the Versa Lite is the most obvious Apple Watch clone of the bunch.

The Polar Unite ($150), meanwhile, gets you a round face, some nice default strap options—and not much more. It looks cute on the wrist, and the textured silicone is a nice touch but if you prefer buckle enclosures, this ain’t the watch for you. I also found the default strap fiddly and at times a little uncomfortable to sleep in.

The Timex Metropolitan R ($180), however, is a genuinely good looking watch. It’s more in the vein of a traditional analog watch, but it also wins points for having a leather-silicone hybrid strap. That means you don’t have to take off the leather strap to work out, which is actually a major plus.

It’s going to come down to individual preferences, but having worn all four of these watches, the Versa Lite and Timex Metropolitan R are probably the two that struck the best balance between looks and comfort. But there can be only one winner—and the Timex is just the classier looking watch.

If design were the only thing, you wouldn’t need a smartwatch. A big draw is the ability to get notifications and track some aspect of your health—be it your workouts, heart rate, or sleeping patterns. They all also offer things like the ability to set alarms and control music playback—though none will get you onboard music storage.

Of the bunch, the Polar Unite is the most fitness-focused, even though it opts for connected GPS via your phone over built-in GPS. In testing, it tended to overreport distance, but not egregiously so. It also provides good context into your sleep and recovery tracking, as well as how much strain you’ve taken on from working out. If you’re not particularly into fitness, however, the Unite is way more limiting and the interface isn’t as smooth. It takes care of notifications just fine though.

The Versa Lite also delivers pretty good metrics and accuracy, as well as the ability to control which apps send you notifications, a Fitbit app store, a library of watch faces, and female health tracking right on the wrist. The Versa Lite cuts out the altimeter, swim-tracking, Fitbit Coach, NFC payments, or onboard music but that’s not a bad trade-off for the lower price. It’s also more lifestyle-focused than the Unite, and the Fitbit community is huge. That’s a major draw if you’re motivated by competition, badges, and leaderboards.

Meanwhile, the Timex Metropolitan R is the only one of the four with built-in GPS. There’s a little bit of latency when the watch is trying to find a signal, but built-in GPS is pretty great for under $200. You also get heat maps for runs, but overall I found the Metropolitan R’s accuracy to be better at big-picture metrics than granular details. That’s the same for sleep tracking on the Metropolitan R.

There’s a bit of give-and-take with each of these watches, but it comes down to the Versa Lite and the Polar Unite. While I found the Unite to be the most accurate at recording activities, it’s not that far off from the Versa Lite. When you consider the Fitbit’s wider overall feature set and built-in community, the Versa Lite edges out a win.

Right off the bat, you can knock the Unite out of the competition. It’s estimated for four days of battery on a single charge, but I never got more than three in testing. That ought to tell you the type of battery longevity we’re talking about here if three days is the weakest showing of the lot.

The Versa Lite is also estimated at around four days, but I’ve found that Fitbits tend to overperform with regard to battery life. I’ve definitely gotten close to a week with the Versa Lite before.

That still pales in comparison to the Timex Metropolitan R. In over a week of 24/7 testing that included GPS runs, I still had over 60% battery left. That’s even more impressive when you recall that the Metropolitan R uses built-in GPS, which is a notorious battery guzzler.

All smartwatches come with their own app, and a shitty one can tank what’s an otherwise great gadget. These watches all come with serviceable apps, but there’s a clear winner here and that’s the Fitbit Versa Lite Edition.

This is almost unfair because Fitbit’s had years to tweak its app and streamline everything. Overall, it’s the easiest to navigate and pair devices, as well as to find relevant stats and historical data. The Timex Smart app, by contrast, isn’t even a year old yet.

This isn’t to say all the other apps suck. The Timex Smart app was developed by Huami and therefore, bears a striking similarity to the Amazfit app (also developed by Huami.) That’s not bad! It’s just Timex’s app is also pretty simplistic. You’re not going to get some metrics that you would with an Amazfit watch, and I had some issues with syncing. The Polar Flow app is actually the most in-depth when it comes to data, but by god, navigating it takes some getting used to. Things aren’t always where you think they should be, and in years of using Polar watches, smooth syncing isn’t always a given.

This was a pretty even Battlemodo with the Fitbit Versa Lite Edition and the Timex, each winning two battles and the Polar Unite a close runner up. However, given the broader feature set, streamlined app, and cheaper price, I have to hand the final win to the Versa Lite Edition.

Ultimately, all three of these are great basic smartwatches—it just depends on your needs. While the Versa Lite Edition is the best overall, but if you’re more fitness-minded, the Polar Unite is the better option. Likewise, if style and amazing battery life are more your jam, the Timex Metropolitan R is an excellent alternative.

As a final note, the world of budget smartwatches is actually a lot bigger than these watches. Lesser known brands like Amazfit (which is partly behind the Timex smartwatches), Mobvoi, and MyKronoz offer a stable of even more affordable watches—some in the sub-$100 category even! If you want to hunt for an even better deal, think of this as a good jumping-off point of what criteria to look for, and what some of your trade-offs might be.