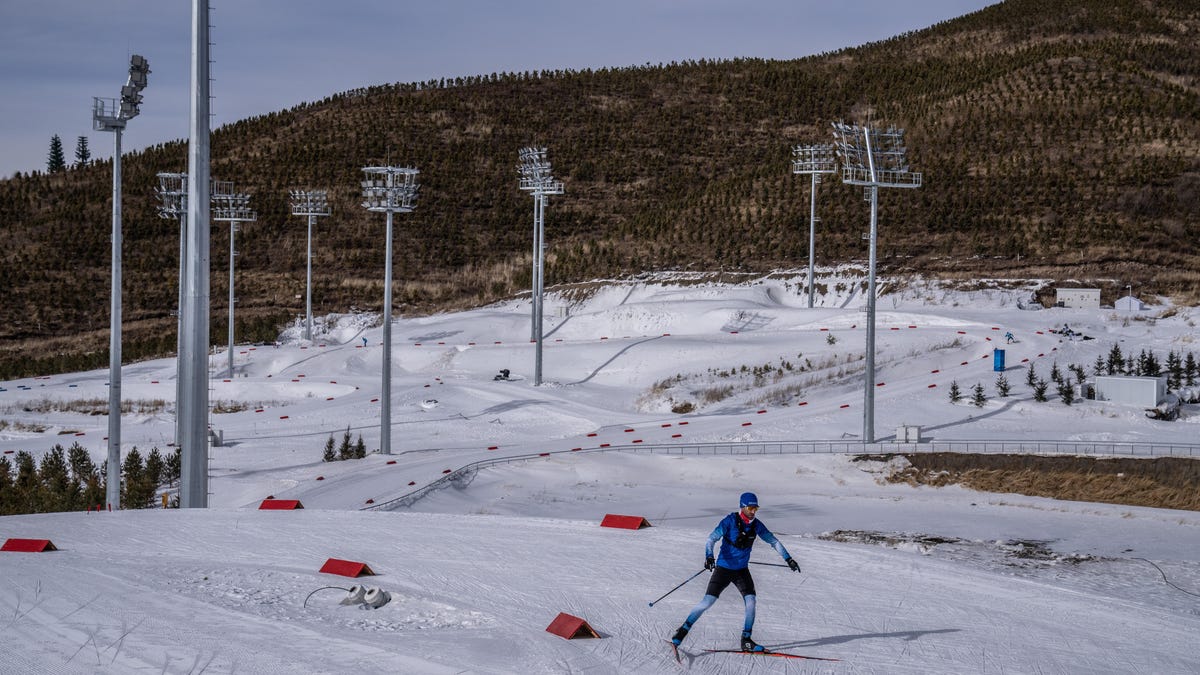 Maddie Phaneuf, an Olympic biathlete (she does a combination of cross-country skiing and rifle shooting) from Upstate New York has watched this year’s Winter Games with mixed enthusiasm. She’s saddened—but not surprised—that the event has had to use fake snow, as snowfall is becoming harder to predict around the world.

It’s become more and more obvious to Phaneuf that finding the right amount of snow for sports like hers is more complicated than it used to be. As a professional athlete, she has traveled to compete and train in places like the Dolomites in Italy, snowy ranges known for their long winters, only to find a completely different environment.

“You’re imagining these places to be amazing winter wonderlands that have so much snow, and you get there and there’s just green grass, and there’s just a ribbon of white snow that’s all manmade,” she said. “It’s obviously hard to see that as a professional athlete, where that’s your livelihood to race on that.”

The climate crisis is changing winter weather around the world. What was once a predictable season of cold weather and snow is now a hodgepodge of extreme snowfall and dry spells. This year’s Winter Olympic Games have worried both climate advocates and winter sport athletes. Beijing has experienced dangerously high levels of pollution, and venues are using artificial snow for outdoor sports—this year’s games are in fact using all fake snow. Seeing this, athletes, scientists, and outdoor sporting enthusiasts are concerned that it will become harder and harder to stage future Winter Olympics.

Mario Molina is the executive director of Protect Our Winters (POW), a nonprofit that promotes progressive climate policy. They aim to turn outdoor enthusiasts into climate advocates by using their personal experiences and love for winter sports as motivation. “We encourage the outdoor community, which is [more than] 35 million people that recreate [with] outdoor sports every year, and we try to get the message out there to participate in the civic process by calling their elected officials,” Molina said. “And we get out the vote in favor of climate-friendly candidates.”

POW also works with professional athletes and winter sports influencers like Phaneuf, who are seeing their careers changed by shortening winters and erratic snowfall, to engage others who are worried about the future of winter sports. The organization partners with climate and weather experts as part of their outreach and education as well.

To sound the alarm on a potentially snow-less future, POW released “Slippery Slopes: How Climate Change is threatening the 2022 Winter Olympics.” The report pointed to research from the University of Waterloo that found that, “out of the 21 cities to have hosted the Winter Olympics up to 2022, only Sapporo in Japan would have the necessary conditions to host them again in a safe and fair way by the end of the 21st century if there is not a drastic reduction in greenhouse gasses.”

Thomas Painter is a snow hydrologist who works with Airborne Snow Observatories Inc, a California-based organization that collects data on the snow melt flowing out of major water basins in the Western United States. He explained that the climate crisis is making it harder to predict reliable snowfall for parts of the world that used to have regular snowy winters.

“We are moving towards more precipitation falling as rain that used to fall as snow… There’s enormous volatility, and so I think that’s going to make the decision on where we even continue to have the Winter Olympics,” he said.

That’s not to say that snow storms aren’t happening—we’ve seen major snow and ice storms this year. But a changing climate is going to make winter more about feast or famine, where there are large snowfall events followed by long stretches of time with no snow at all. Painter pointed to a variety of factors like rapidly melting glaciers, droughts all over the world, and changing atmospheric rivers that used to ensure predictable rain and snowfall.

Molina pointed out how some sports can be replicated indoors; events like figure skating are already held at indoor rinks. But athletes like Phaneuf need to train and compete along stretches of land.

Without regular snowfall and long winters, it’s harder for areas to maintain a “base” of snow so that equipment like skis and snowboards aren’t regularly damaged by rocks and other elements. Many ski resorts try to have a base of about 20 inches of snow before opening; areas designated for cross country skiing only need a few inches if the area is grassy in the spring. If there are a lot of rocks on the ground, there needs to be several inches of snow. Without that thick layer, skiers and snowboarders can easily be injured by tripping.

When there isn’t enough snow, some competition organizers have to bring in snow from other areas. Distance sports like Phaneuf’s don’t belong indoors, but current conditions have caused many competitions to be canceled or relocated due to a lack of adequate snow.

“I’ve had experiences where we’ve been to races and the only snow that could provide for us was extremely dirty and full of rocks. And as soon as you just ski, one-kilometer loop or two kilometers, your skis are just totally damaged… full of scratches and dents,” she said.

When there isn’t local snow to be moved around, venues and events have turned to artificial snow. Beijing had to utilize entirely man-made snow in order to host the games. Using fake snow has become increasingly common in other previous Olympics. Fake snow was used in the 1980 Winter Olympics in Lake Placid. It also made up more than half of the snow during the 2014 Sochi games, and about 90% of the snow at Pyeongchang in 2018 came from snow machines, Vox reported.

Fake snow doesn’t work with sporting equipment the same way that natural snow would. Artificially made snow may look like the fallen stuff, but when put under a microscope, the structure is very different. Real snow is made of snowflakes and isn’t as densely packed, while fake snow is often composed of frozen water droplets that become tightly packed, creating harder surfaces and unsafe landings.

POW’s “Slippery Slopes” report outlined the experiences of several athletes, who explained that competing or training on fake snow increases the risk of “bad landings.” Scottish freestyle skier Laura Donaldson—who competed at the Salt Lake City Winter Olympics in 2002—pointed out in POW’s report that fake snow can really suck for professional sports.

Phaneuf is one of many athletes and former Olympians who have worked with organizations like POW and have traveled to Washington D.C. to lobby for better climate legislation so that professionals like herself and others employed in the outdoor industry can keep their livelihoods.

“I selfishly want to continue seeing the Olympics… It’s also hard to see these communities and the next generation of skiers not being able to grow up with this bountiful snow and a real winter,” she said.

Painter sees the survival of the Olympics as a symbol of how much effort international leaders and communities have put in to lower emissions and to protect snowy environments while we still have them. “Sounds kind of like a serious first world problem,” he said. “[Water issues cause] geopolitical strife… regional conflict… I think that if we’re still having Olympiads in at the end of this century, then we will have finally done something right.”