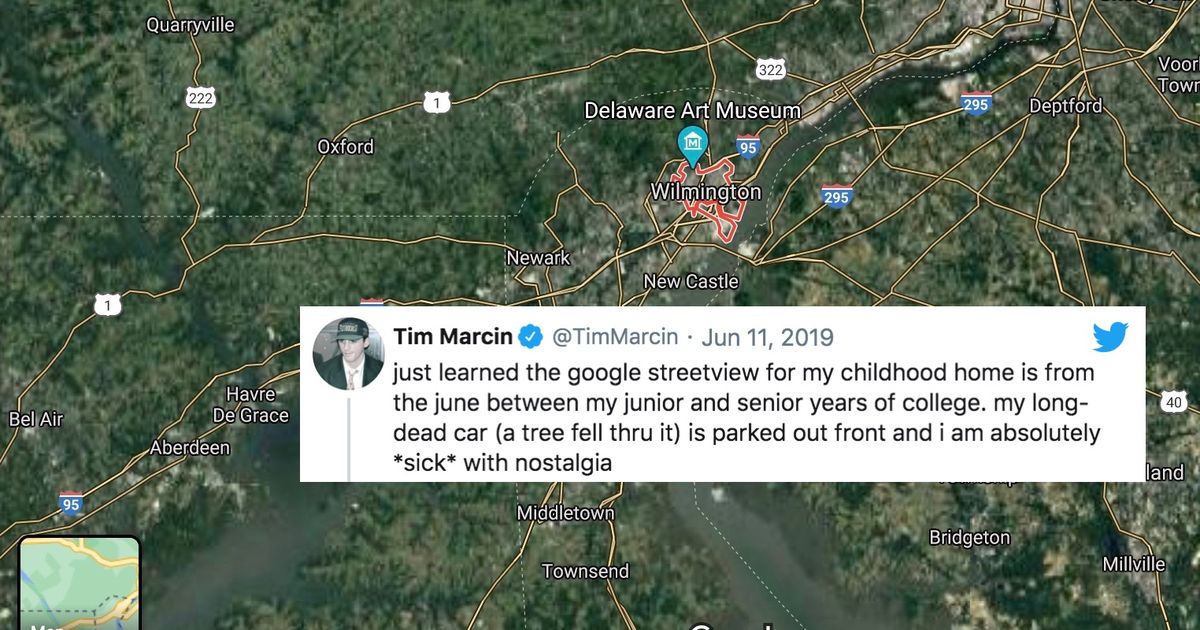 There’s a line in the movie Kicking and Screaming — the 1995, Noah Baumbach directed, postgrad coming-of-age film — where a character half-jokingly tells a friend, “I’m nostalgic for conversations I had yesterday.”

What I’m saying is, I’m nostalgic by nature, perhaps to a fault.

I guess it’s not surprising, then, that I was struck by a wave of nostalgia while bopping around Google Street View a while back. But it was different — an odd nostalgia. We’ll get to that. But first let’s backtrack.

It was 2019. So, you know, before the world turned the hellscape rating up to 11. And somehow as I fumbled around the internet I ended up on Street View, outside my childhood home in Wilmington, Delaware.

Though my hometown now counts a president among its citizenry, it’s not a bustling metropolis. Google hasn’t exactly rushed to update the Street View of the suburbs of Wilmington. Fair enough. So when I stumbled onto my address in 2019, the most recent image update was from 2012 — and it remains so now.

As a sucker prone to nostalgia, Google couldn’t have captured a more perfect time in my life. June 2012 was the summer between my junior and senior year of college. I was newly 21, and hanging out with my friends, going to bars, playing soccer, and being young. All the capital-R Romantic things you remember with rosy goggles years later.

But no, there it was. My house. My old red Honda parked on the street. The tree that’s long been cut down.

There was just something different about the type of nostalgia Street View offered. It’s not looking at pictures, some posed and smiling thing. It’s not trawling through the filing cabinets of your memory, flipping past half-accurate visions of what happened in the past. It’s a snapshot. It’s how things actually were, frozen in time and unsuspecting.

It was more a seeking nostalgia than a reflective one. I zoomed in and circled my old car. Look a Wawa coffee cup. Is that a soccer ball in the back? Oh my God, that worn on Washington College sticker — did I ever scrape that off?

But I wasn’t satisfied. I kept moving and zooming, tracking up and down my street, looking for angles that didn’t exist. I tried to point the cursor up my driveway. Where was I, or rather, where was 2012 me?

“The reason why the Google Street thing wasn’t enough…what you were really wanting was to relive, to some extent, that little portion of your life,” said Dr. Krystine Batcho, a psychologist who has studied nostalgia extensively. “Now, when I say relive it, that can end up being misunderstood by people. Generally, people don’t want to go back and live their old life. That’s not what I mean. But it’s a little bit like visiting.”

I just started thinking about a cafe I used to go to in Wellington but couldn’t remember the name of, so I checked google maps and now I’m feeling assaulted by nostalgia as I street view Cuba Street 😭 pic.twitter.com/3G383GDh4Z

Dr. Batcho told me nostalgia is something like dropping in on your life, but with the knowledge and hindsight you have currently.

Something about Street View sparked that desire in me to visit. It’s a small aperture, frozen in time, that opens a sightline into a wider landscape of memory. To feelings you had then. There’s so little to see but it’s real. I found myself searching for hints of my life — a different life — in the margins of the image. This image, one gathered by a powerful, all-knowing corporate behemoth, is accurate. It’s the most accurate real-world view of my home, one that can help you arrive to the house with pinpoint precision.

But it doesn’t capture it, not all of it. I filled in the gaps.

“That’s where I fell in love that summer.”

Look, peek out to the backyard. There’s the corner of the porch. That’s where I fell in love that summer. Where I called that girl from college every night for three months. It was the only private place. I could talk all night and not wake a soul. I told her about the slog of my internship, my first dalliance with cubicles. She told me tales of being a tavern hostess. We’d fall asleep, receiver to ear.

We’re engaged now, our wedding postponed a year for, you know, the plague.

There, look, my car. Really look. Apple red and bruised by teenage battles with curbs. My brother drove it first, then me after the ’90s blue Honda clunked out. In 2012 I’d wind through cornfields in that thing, taking single-lane roads back to my tiny college. The radio would go static out there. I’d crank my mom’s old CDs, Bruce Springsteen mostly, and try to make it back to school before the party started. Wherever I was coming from, there was somewhere else I needed to be.

Years later I’d drive the Crimson Tide — we always nicknamed our cars — from Chicago to the ass-end of North Dakota with a buddy. Practically Canada. The return drive would be defined by a check engine light that spanned hundreds of miles through empty terrain. We didn’t tighten the gas cap. Idiots.

I moved to New York years later. I stopped driving. A tree limb stabbed through the sun roof of the Crimson Tide one night. Perfect shot. The car was totaled.

That first time I really went down the Street View rabbit hole, in 2019, I followed it deep. I circled the loop of my neighborhood. Then I wound outward, tracing the roadway arteries of Wilmington where my friends used to live.

It was my whole 2012 life, splayed out in roads with fixed limits. I was there. I was just offscreen. So was my history. Like an extra in a movie who lived an entire life separate from the main plot. It was looking at a secret. I knew the language the roads spoke, I knew the stories of the backyards, the hidden basements and porches and parking lots where things happened. Some sucker might pull up an address and not even know that’s the place I first made friends, real friends, or had my heart broken for the first time. But I knew.

Street View is so ordinary. It’s our own memory, experiences we suture to places in our mind, that spark intense nostalgia, good or bad.

“The nostalgic feeling attached to these little mental time travels can be very bittersweet,” Dr. Batcho told me over the phone. “For some people, they’re a little sweeter, for other people they’re a little more bitter, and which way we tilt, to a large extent, depends upon whether we feel good about where we are now.”

I felt mostly good thinking of my summer 2012 life. It’s a period I romanticize, although I am certain it didn’t feel so romantic at the time. And seeing those streets back in 2019 — a period where I had just escaped a remarkably toxic workplace — felt like a trapdoor to who I was before the real world hit. It was mostly sweet and engaging.

Google street view is something else. I’ve looked at old places I’ve lived, I found the house where my dad lived in the 1920s. Nostalgia enabled by technology.

I’m not alone in falling into a nostalgia trip via Street View. A recent viral TikTok, for instance, showed a person zooming in on their grandmother’s home. The grandmother had passed, but for Google searchers, there she is, sitting in her driveway, enjoying the summer sun.

Hell, the band Arcade Fire even weaponized Street View nostalgia back in 2010. It released a music video for its song “We Used to Wait” that took your address and personalized the story to your childhood home. The nostalgia hits hard.

Now if you need to understand something about nostalgia, like why it hits hard, Dr. Batcho is your person. She told me why certain people, like me, are more nostalgic. People who are exploring their identity, people who want control over their lives, people searching for meaning — they’re more prone to nostalgia.

“To some extent, going back and looking at your old car, or seeing that static frozen image is a search [to] compare that with who I am today,” Dr. Batcho said.

Dr. Batcho also gave me a quick history lesson on the phenomenon. The term nostalgia itself was coined by a German physician in 1688, she said. He was studying homesickness and considered nostalgia a disease or condition of the homesick.

Over time, our understanding of nostalgia widened, but its roots remain with homesickness, with missing the place where you formed your identity.

It’s obvious Street View can’t take you home, not really. But it can be a powerful spark for a nostalgia chain reaction where you feel the sensations of home as it was.

By the time you’re reading this, I’m probably nostalgic for the time I wrote this piece.