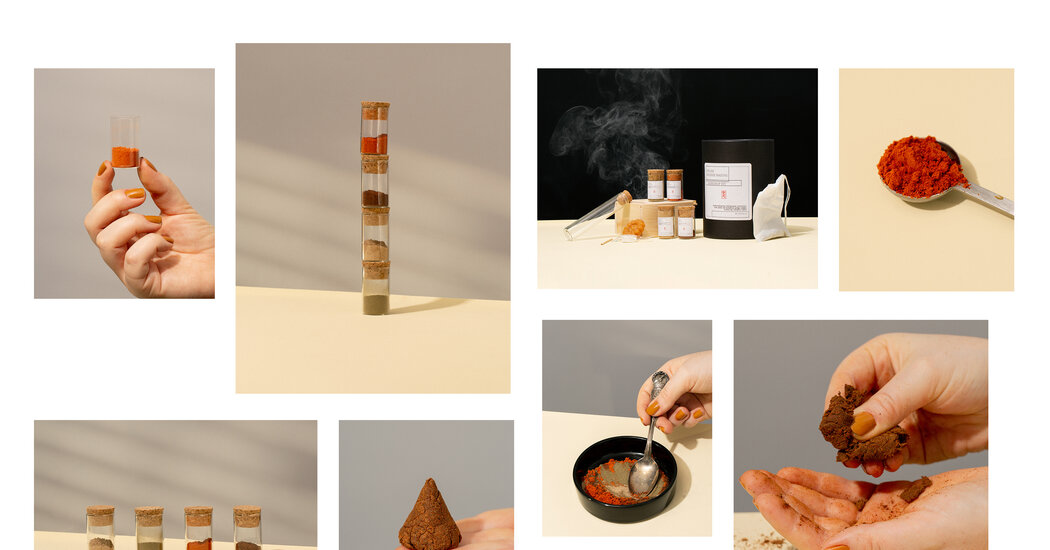 Hyungi Park, a Los Angeles-based artist, began learning how to make incense six years ago. She admits that incense isn’t necessarily the most eco-friendly option, compared with candles or essential oils, but thinks that it’s “definitely more for the mood.” The different functions of incense and the history behind it makes it special to her, especially because it is tied to religious ceremonies. “Incense feels more intentional,” said Ms. Park.

Ms. Park, 25, now sells small batches of handmade incense products through her studio Baboshop. She has seen a 142 percent increase in sales from April through September of this year, based on the same time period last year. The studio’s third most popular item is a $45 incense making kit used for the online workshops that she has been leading on how to make your own.

Incense, which comes in a variety of forms — hand-rolled and dipped sticks, cones, matches, paper, coils, rope, sachets, copal, pellets and loose powders — has been a household staple in communities across the globe for thousands of years.

The sales spikes seen by Ms. Park and across the industry can partially be attributed to a general increase in demand for goods and fragrances during the pandemic, as well as a steady growth in subscribers to the new age of mindfulness that includes practices like meditation and yoga, often accompanied by the smell of burning incense.

Isabel Lee, the studio director at Na Nin in Richmond, Va., reported a 130 percent increase in online sales in September, based on the same time period last year. In general, the fragrance department of the store is thriving in all areas with candles and home fragrance sprays leading the charge.

Ms. Lee, 26, sees incense as an attractive alternative to candles because it’s a “one and done dispersal of fragrance” without the hassle of a constant flame that allows people to improve the quality of their surroundings in a more meaningful way. “It has a different tone.”

[Related: How to Make Your Own Incense]

The power of ritual

Incense sticks and dhoop have long been common in many South Asian homes, temples, and Ayurvedic centers. Shrankhla Holecek, founder of the beauty and wellness label Uma, was first exposed to incense burning in the temples where she was raised in India. “It really touches all aspects of our lives,” she said and added, “not a single day passed by without smelling incense burned in my home.”

Ms. Holecek, 37, said that incense is a tool for heightening spiritual practices and rituals that bring people closer to universal consciousness as “the spirit of the prayer disseminates through the home.” Incense is also burned in ceremonies to commemorate the departed and celebrate the journey of their lives.

When Ms. Holecek introduced a line of incense after creating Uma in 2017, the product threw off customers because “it’s just not part of the cultural experience in the United States.” Ms. Holecek thinks that people don’t automatically associate the origins of incense with India because of the Western commercialization of the product. This cultural divide caused what she describes as a “slow burn,” in her customers buying incense, but from June to December of this year, sales spiked by 1300 percent. She hopes that this embrace of incense will continue to change how people incorporate smells into their homes and engage in rituals.

In the realm of spirituality, incense is a tool used for cleansing the energy in a space, according to Lala Lopez, the owner of Mothball Memoirs. Within some cultures, it plays a significant role in ceremonies and traditions. For example, burning incense in tombs to worship the gods was fundamental in ancient Egypt. Greeks and Romans used it to repel demons and evil spirits. Eastern religions often use it as a way of honoring ancestors. Ms. Park points out that incense was “historically used as a measurement of time.”

“It’s about not just the ritual of lighting incense, but it’s the whole sensory experience,” said Ms. Lopez, who views goods like Teomati and Espiritus del Ande as tools that should be treated with great reverence. Plant-based incense, which contains dried woods, herbs, spices, resins, and barks, is a fundamental part of her lifestyle. She said she uses it to “clear the energy” in her home, on new items that she buys online, when she gets back from seeing people and even when she wants to change her own negative feelings.

Mothball Memoirs’ sales tripled when quarantine started in mid-March through the end of June, based on the same time period last year. Ms. Lopez believes this has something to do with the psychology behind the buying and the need for balance, peace, and comfort in her customer’s homes. Many of her customers have also requested care packages with handwritten notes, sometimes even to themselves.

“You’ve had the spike of the ideas of spirituality becoming mainstream and sexy, and all of these things becoming commodified into big business,” Ms. Lopez said. “When you strip back all of those layers, what’s really there is people wanting to take care of themselves and paying more attention to how they’re doing all the things.”

Is incense good for us?

Health concerns arise when incense is made out of synthetic ingredients because it pollutes the air when burned and inhaling these toxins is bad for the respiratory system according to Dr. Allen Dozor, a professor of clinical public health and chief of the Pulmonology, Allergy and Sleep Medicine division at New York Medical College.

“I don’t trust when it says all natural, that doesn’t really persuade me,” he said. “Statistically there’s a long list of medical risks associated with exposure to incense.”

However, Dr. Dozor is culturally sensitive to the importance of incense in religious services and rituals, and doesn’t think that should be disregarded. He recognizes the correlation between how “mental health can really help your physical health” and the use of incense as a coping mechanism for emotional stress. With that in mind, he said that it is critical to use incense in moderation and “making sure air circulates well” by opening the windows.

Hellen Yuan, an aromatherapist, usui reiki practitioner, and founder of the clean beauty brand Hellen, advises burning incense from a distance in a spacious room where the inhaler is not directly exposed to the smoke. Anyone with allergies, asthma, or any respiratory issues should consult a doctor before use. Similar to any other type of wellness-oriented product, it’s important to practice common sense. ”People want to binge on this stuff, but it’s really like following your intuition and your body, and being cautious about not overusing anything,” Ms. Yuan said.

Incense quality varies because there’s no form of regulation in the U.S. incense market and not enough studies have been conducted. Across the board, very few companies are transparent about their full list of ingredients.

Ms. Park warns that incense paper is often soaked in saltpeter also known as potassium nitrate, a chemical compound that is a constituent of gunpowder and can be found in fireworks, rocket propellants, and fertilizers. Even if consumers were to refer to the CDC’s Inventory of Select Agents and Toxins, Dr. Dozor said that it’s still not fully up-to-date with every chemical tested for safety.

Issues of sustainability and health are being addressed by some companies though. Ms. Lopez of Mothball Memoirs vets every brand that she stocks (the prices vary from $5 to $16) to make sure that they are fair trade suppliers with eco-initiatives and Green America certified. She fulfills a small quantity of orders at a time, restocking inventory as needed to maintain a more mindful approach with regards to material waste.

The company Ponsont makes every piece of material in their paper incense by hand, and the company operates on a smaller scale, going through waiting periods of reopening orders. After being sold-out for months their inventory is now replenished, but Elizabeth Toney, a consultant for the brand, finds this slower approach to be “more sustainable all around.”

After the trial and error of testing different formulas for incense paper, Justin Vaughan, 35, the founder of the company, settled on alcohol because he was “forced to strip things down.”

“The very nature of burning anything is not going to be as good for you as breathing oxygen,” said Mr. Vaughan.

As a traditional perfumer, Mr. Vaughan is very particular about the fragrance materials because he is committed to making the most clean burning product possible. This means no parabens, plasticizers, or petroleum-derived ingredients.

Bodha founders Emily and Fred L’Ami created their own line of incense six years ago with the hopes of offering something smokeless.

For people seeking out alternatives to burning sage and palo santo out of respect for Indigenous rituals, incense might be a more appealing approach. Ms. Lopez believes that treating all of these items with “the utmost intention” shows that someone is coming from a place of love and respect.

Jenna Wortham on the Incenses She Uses for Every Mood