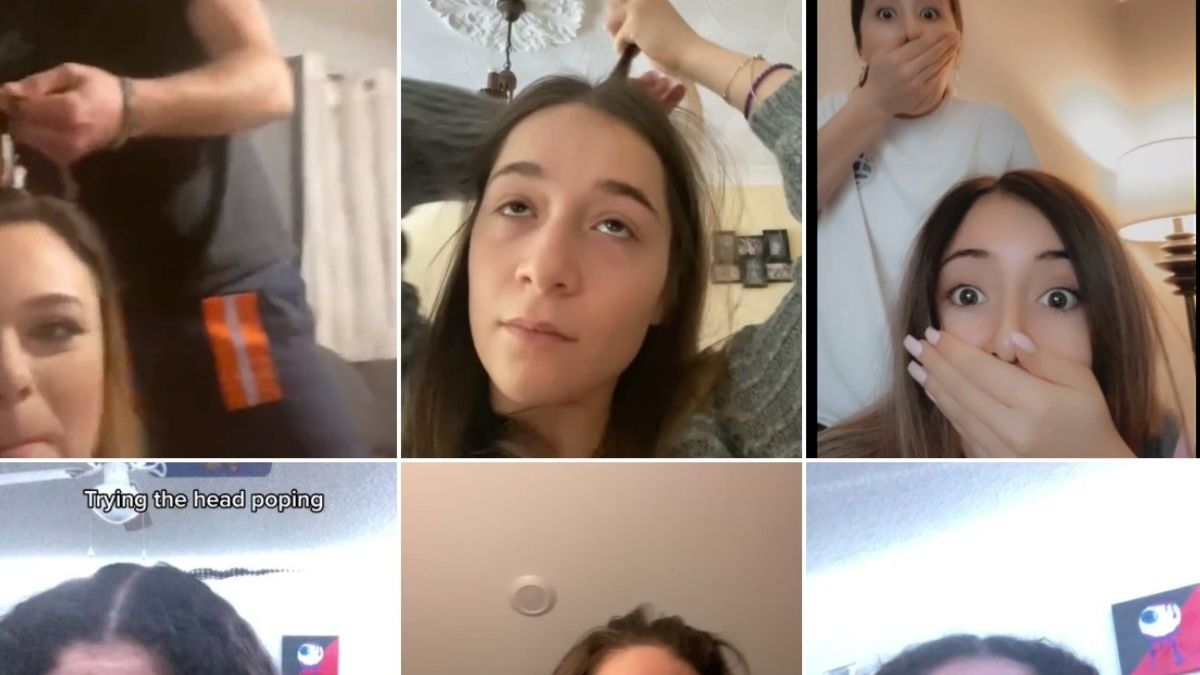 I don’t agree with Melania Trump on much, but we see eye-to-eye on Christmas—like our nation’s soon-to-be-ex first lady said, “Who gives a f*** about the Christmas stuff and decorations?” Preach it, sister!

Even though the holiday season is descending upon us with the weight of an Orwellian fascist’s boot, I’m holding out as long as I can to avoid even acknowledging all that “cheer” and “good will toward men” nonsense, so they’ll be no mention of Christmas, Hanukkah, Kwanzaa or anything else…Until next week.

TikTok trend of the week: Scalp-popping

The newest, weirdest trend on TikTok this week is “scalp popping.” Over 6 million people have checked out the #scalppopping hashtag that features videos of users “hair cracking,” twisting a lock of hair around their fingers and yanking it. Supposedly, if you do it right, you get a popping sound like the sound of cracking your knuckles. There’s not a ton of information about this out there, other than these videos and a few posts to message boards where anonymous users say the technique is used at Asian nail salons as a kind of massage, so who knows if it’s even real? It could be just a hoax designed to get people to pull their own hair.

Mine is too short to give it a try, but maybe you could? Go ahead: Give ‘er a rip! But do not go into this lightly. Obligatory warning: It hurts to pull your own hair and you could rip it right out of your head.

Viral video of the week: Daniel Radcliffe gets hot

This week’s viral video is the season finale of YouTube’s most fascinating celebrity interview show, “Hot Ones.” In keeping with the show’s simple-but-brilliant concept, it features Harry Potter actor Daniel Radcliffe answering typical “celebrity interview” questions while eating a series of spicier and spicier chicken wings. It doesn’t sound like much, but there’s something fascinating about seeing famous people test their bravado, and there’s something hilarious about watching them try to plug their next project while their nose is running and they can barely speak from the pain, plus, the intense pain—these wings are hot—can bring out honesty rarely seen in celebrity interviews. In the future, this is how members of congress will be chosen.

This week in music: Spotify’s Wrapped

Spotify released Wrapped this week, and everyone into music is either sharing its results on the social meeds or complaining about how stupid and lame it is. Wrapped compiles users’ 2020 listening habits into bite-sized, shareable information chunks, in case you forget what music you like. It even offers a quiz feature where you basically answer multiple choice questions about your own listening habits—this level of navel-gazing is perfect for our new never-going-anywhere-ever lifestyle.

You can also check out the whole of Spotify’s users’ tastes and compare them against your own, in case you need further proof of how out of touch you are. For instance, the most-played track on Spotify in toto is ‘80s throwback “Blinding Lights” by The Weeknd, whereas I listened to 2004’s contemplative lo-fi ditty “Against Pollution” by The Mountains Goats more than any other song in 2020. (This is an aging-hipster brag, by the way.)

This week in TV: Robots vs. aliens

It’s a big TV week for both dweebs and nerdlingers: Alien Worlds is making its debut on Netflix, and there’s a new season of Battlebots on the Discovery Channel. Alien Worlds is a four-part mini-series in which scientists and CGI artists work together to present a realistic (or at least plausible) vision of what life might be like on actual exoplanets. It’s the perfect show for people desperate to leave the bounds of our own fallen world, if only in their imaginations.

Meanwhile, over on Discovery Channel, there’s a new season of Battlebots, the greatest robot-combat television show in history. This sport-of-the-future features killer robots equipped with drills, saws, hammers, and flamethrowers pitted against one another in chaotic battles to the mechanical death. It’s gleefully destructive and violent, but no one gets hurt. It also features really innovative engineering, and it’s COVID-safe: The ‘bots aren’t going to infect each other. Highly recommended if you have a kid who’s even slightly on the nerdy side.

Even though Counter Strike: Global Offensive came out nearly 8 years ago, it still has 20 million active users—the prehistoric multiplayer shooter is so popular, the release of new content remains big news in gaming. Broken Fang, CS:GO’s new “operation,” features a ton of fresh weapon skins, new maps across a variety of game modes, weekly missions, and tons more. So, if your teen is a ‘core gamer, they’ll need to download this one, even if just to brag about how superior PC gamers are to console peasants. It’s available on Steam now.