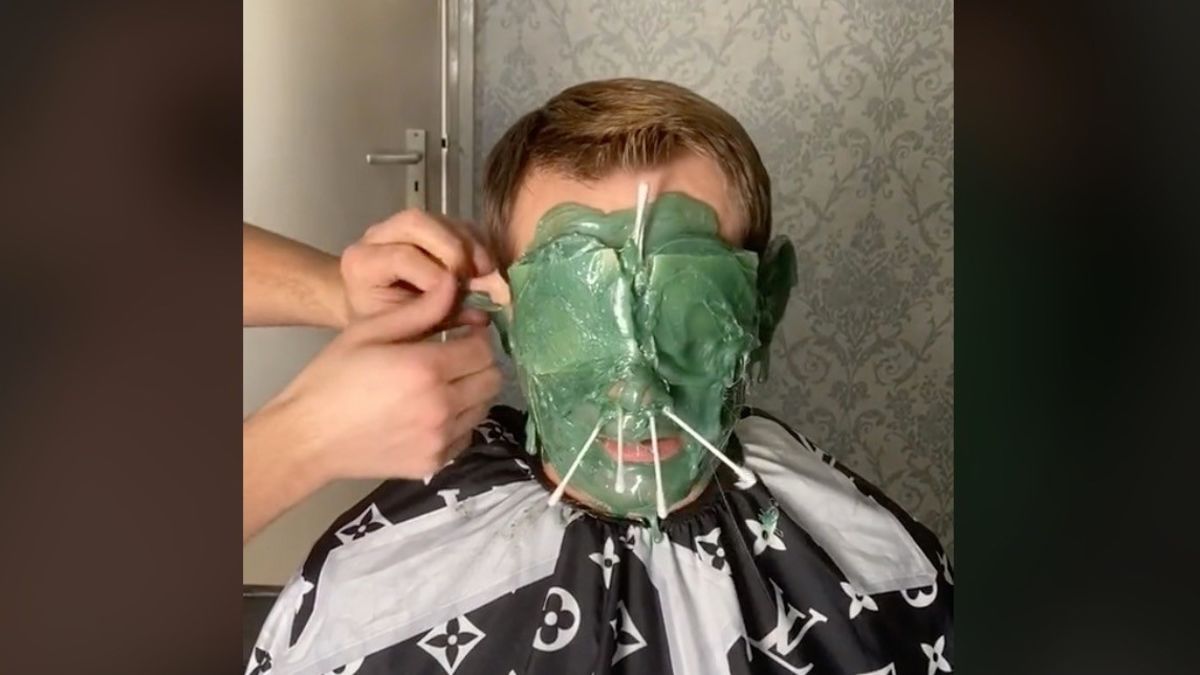 This week, the kids online are pouring hot wax on their faces, being outraged by Disney, disappointed by Nintendo, and learning what happens to all the dead bodies piling up from COVID-19. So everyone is basically out here having a normal one.

This week in weird food: The internet’s most disgusting recipes

TikTok user @gettishow must be stopped. She must be held accountable for her culinary crimes, including injecting chocolate into an innocent boiled egg, making pasta with Nerds candy (she calls it “Getti Spaghetti”), and boiling a bag of Flamin’ Hot Cheetos into a bright orange sludge then combining it with boxed macaroni and cheese. You can watch Lifehacker’s own Claire Lower and Joel Khan try it out in their Hack or Wack: Snack Edition series.

Getti’s foul recipes sent me down a miniature rabbit hole of disgusting internet chefs, including this guy who cooks pasta in beer, mustard, and half and half and makes “cheesy mashed potatoes” by boiling Lay’s potato chips in water and adding cheese, and a woman who uses her forearms as rolling pins and feeds her children something called “Spaghettio pie.” Whether these chefs are trolling with these horrific “food hacks” can’t be determined, but since Kraft sells a pre-packaged version of Flamin’ Hot Cheetos Mac ‘n Cheese, it’s clear people actually take it seriously. Shudder.

This week in TikTok warnings: Don’t pour molten wax on your face

Moms, hide your scented candles. A barber shop in the Netherlands recently posted a series of TikTok videos of a unique service to its 850,000 followers: Full-face waxing. Patrons of Kapsalon Freedom pay a barber to glob hot wax all over their faces and torsos and then rip it off. I don’t know why either; life is mysterious sometimes.

As you’d expect, medical professionals quickly condemned the practice. “It is clearly not a good idea to cover the whole face with wax,” Dermatologist Dr. Emma Wedgeworth told Yahoo!Sports. “The bottom line is that this is a senseless practice, which has more potential for harm than good and I would not advise it.”

Well, you’re not the boss of me, Dr. Emma Wedgeworth. If I want to pour hot wax all over my face, I’ll do it. I have a candle right here and I’m gonna…My god, why? The burning! Why wasn’t I prevented from doing this?

This week in movies: Cruella trailer

The first trailer for Disney flick Cruella dropped this week, and, shockingly, the more sensitive corners of the internet found something in it to be outraged about. The upcoming crime comedy stars Emma Stone as the titular villain, a fashion maven described as “Brilliant. Bad. A little mad.”

While many internet movie nerds reacted to the trailer by observing that Cruella looks fun, like a stylized black comedy featuring a girl version of Joker, minus the self-serious, 1970s auteur-theory vibe, others were sputtering and popping their monocles from outrage. The calls for boycotts and cancelation stem from Cruella’s unique approach to fashion: The (entirely fictional) character values stylish outwear more than the lives of (pretend) Dalmatian puppies, and some fear this will promote, glamorize, and encourage animal abuse. The movie (which is entirely make-believe) comes out in May.

Viral video of the week: COVID-19 deaths in Los Angeles

Viral videos are usually funny clips of cats sneezing or dudes being hit in the balls, but sometimes, something serious goes viral, too. This week, tons of people are sharing a video about how California is dealing with the mountain of corpses created by COVID-19. The clip, created by Los Angeles mortician, activist, and author Caitlin Doughty, gives us an insider’s view of the logistics of dealing with an unexpected onslaught of corpses.

Doughty manages to be informative, reassuring, and even funny in the face of a monumental tragedy. I suggest you watch this video at once. Then, keep clicking on her “Ask a Mortician” series to learn how morticians deal with extremely fat corpses, whether Walt Disney’s head is actually frozen, and what happened to the corpses from The Titanic. Then pretend Doughty is your girlfriend and imagine having a picnic in a gloomy graveyard while she tells you all kinds of cool, funny, and morbid things about the modern death industry.

It had been over a year since Nintendo released a full Nintendo Direct video—COVID has affected everything—so the ever-excitable Nintendo fan coalition were positively giddy with excitement prior to this week’s Nintendo press event.

In keeping with tradition, the actual announcements dashed the hopes of the faithful. It’s not that there isn’t cool Nintendo stuff to look forward to; it’s that there’s not enough and it’s not the cool stuff fans wanted.

Instead of the reveal of a new 3D Mario game, a revival of Pilotwings 64, or in-depth info on the sequel to The Legend of Zelda: Breath of The Wild, we learned that The Legend of Zelda: Skyward Sword, a classic Wii game, is being ported to the Switch. That’s nice, I guess, but will Breath of the Wild 2 feature Zelda as a playable character?

Other notable not-Breath-of-the-Wild-2-news includes the word that Splatoon 3 is slated to launch in 2022, goofy combat platformer Fall Guys: Ultimate Knockout will come out this summer, and Mario Golf: Super Rush comes out in June. Check out the full Nintendo Direct here (even though there’s nothing new about Breath of the Wild 2.)