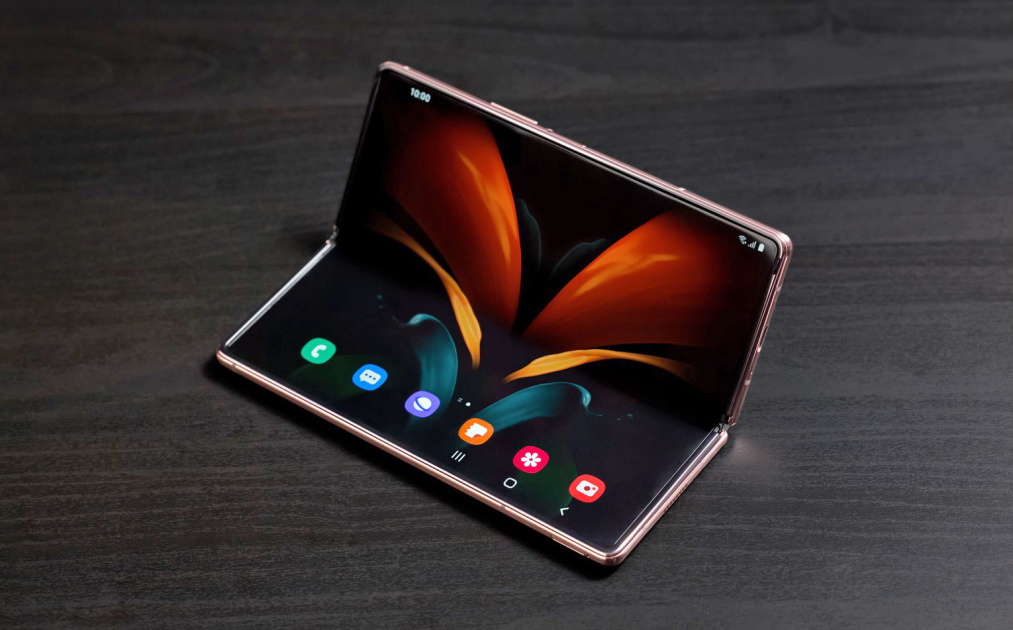 There’s also a similar “sweeper” between the phone’s body and hinge housing to repel dust and dirt particles, Samsung said, though this time around the brush is thinner. Overall, too, Samsung said the Fold 2 was re-engineered to feature a “sleek, unified design” that indeed looks thinner and prettier than the original.

A lot of what we didn’t know about the Z Fold 2 came down to its software, and Samsung shared more details today around Flex Mode and App Continuity. We already saw Flex Mode on the Z Flip, which splits the foldable screen in half when the phone is bent, so your apps are positioned more intuitively across the hinge. App Continuity will allow you to open up the Fold 2 and see an expanded view of the app you were using on the smaller front display.

A new Capture View Mode lets you view your recently taken pictures in the bottom half of the screen while still in the camera app so you don’t have to launch the Gallery to see your shots. There’s also an Auto Framing tool that lets you set the Fold 2 up like a laptop, using the front camera to shoot videos, and the phone will keep your subject in the frame even as it moves. This is similar to what Google’s Duo already does on video calls via its Nest Hub Max smart display, or Facebook on the Portal.

If you’re taking a photo of someone else, you can both see a preview of the shot — you on the larger main display and your subject via the smaller “Cover” screen. Like most of Samsung’s recent flagships, the Fold 2 also comes with Pro Video, Single Take, Bright Night and Night modes.

One of the biggest draws of that larger folding screen is improved productivity, and like most Samsung devices with bigger screens, the Fold 2 supports running multiple apps side by side at the same time. The company says this is “advanced” Multi-Active Window so you can better customize your screen layout. You can even open different files from the same app and view them at the same time in multiple instances of the app. Samsung also refined its MultiWindow Tray to let you launch several apps at one tap.

The best thing about having multiple windows open side by side is the ability to drag and drop text and files between them, which you can do on the Z Fold 2. There’s also a Split Screen Capture tool that lets you record what’s on one side of the screen then transfer that image to the other. Samsung’s also offering the wireless DeX syncing feature that it introduced on the Note 20 Ultra, which will make it easier for you to cast your phone’s content to a compatible smart TV. If you prefer using a tablet-friendly interface on the main (foldable) screen, you can go into settings to switch to a “large screen layout” or stick to a traditional phone view. App’s like Microsoft suite of Office tools support the flexible display layout by keeping the inbox list view on the left half, for example, while showing individual messages on the right. You can get a PC-like toolbar at the top of the screen in tablet mode for apps like Word, Excel and PowerPoint, too.

It’s nice to learn about what the Z Fold 2 can theoretically do, though we’d have to wait for a full review to see how it truly holds up in the real world. Since the phone is powered by the Snapdragon 865 Plus and 12GB of RAM, it should be capable of all that multitasking we’re about to throw at it. We already knew from Unpacked that the Fold 2’s battery comes in at 4,500mAh, and that we can expect it to last all day and support Super Fast charging. It’s also 5G-compatible, and will work with both sub-6 and mmWave technologies, so you can get fast download speeds where available.

The Galaxy Z Fold 2 will come in Mystic Black or Mystic Bronze color options, and you can pick one of four hinge hues to go with either — Metallic Silver, Metallic Gold, Metallic Red or Metallic Blue. If you prefer something fancier, there’s also the Thom Browne Edition with the fashion brand’s signature multicolor stripe design. It’ll also feature a special lock screen and photo filter. But you’ll have to get it in the Thom Browne Edition package, which comes with the Watch 3 and Galaxy Buds Live in similar designs, with customized accessories.

Even a non-Thom Browne variant of the Z Fold 2 is pretty pricey at basically $2,000, and Samsung is throwing a sort of VIP service with every purchase of its foldable. The Galaxy Z Premier Service, which is also available for those who bought the Fold or Z Flip, provides on-demand concierge support. You’ll get tutorials with product experts, a Founders Card membership, “access to a prepared meal from a Michelin star restaurant,” “an elite fairway golf and country club program at clubs across the US” and one-time device protection against accidental display damage within a year or your purchase.

You can buy the Z Fold 2 5G via carriers or unlocked at Samsung.com and other retailers from September 18th, though pre-orders begin Sept. 2nd at 12:01am ET.