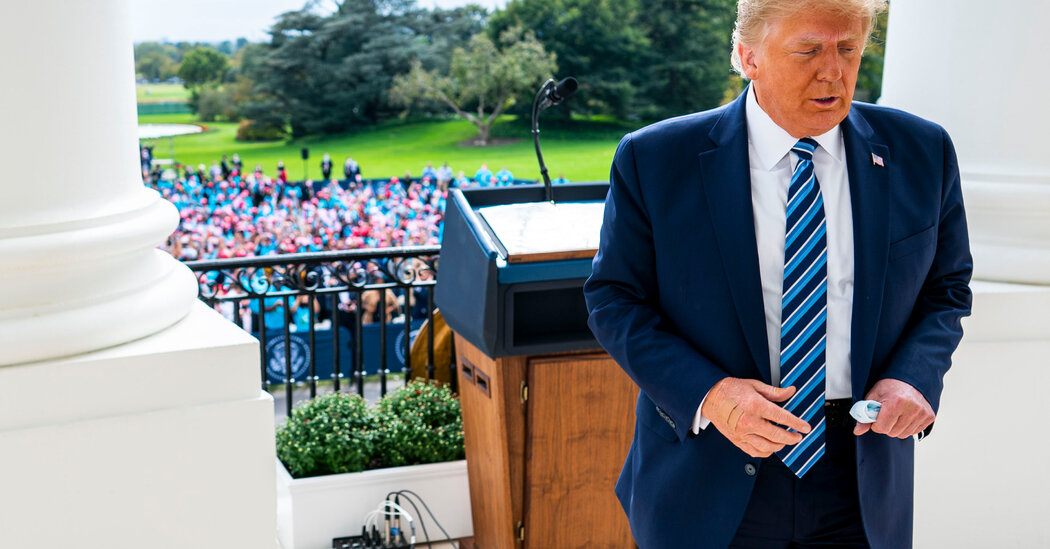 WASHINGTON — Last month, Greg Schott, a lifelong Republican disgusted by President Trump, decided it was time to speak out in a meaningful way.

Mr. Schott, who sold his business software company to Salesforce in 2018 for a reported $6.5 billion, decided to spend $1 million of his own money to start a new group, Reclaim Our Party, a super PAC targeting right-leaning independents and soft Republicans and telling them it was OK to vote against Mr. Trump.

The two biggest groups that dominate the anti-Trump Republican landscape, the Lincoln Project and Republican Voters Against Trump, have both become multimillion-dollar operations that conduct their own sophisticated data research and polling.

Then there’s the Bravery Project, led by Joe Walsh, a former Republican congressman from Illinois; Stand Up Republic, which recently introduced a spinoff, Christians Against Trumpism & Political Extremism; the Republican Political Alliance for Integrity and Reform, known as Repair and led by two former top Trump administration officials; and 43 Alumni for Joe Biden, which consists of alumni from President George W. Bush’s administration.

And don’t forget about the short-lived Right Side PAC, founded by Anthony Scaramucci, the former White House communications director, and Matthew Borges, a former chairman of the Ohio Republican Party. The group formed in June with the mission of turning out Republican voters for Mr. Biden, the Democratic presidential nominee, in battleground states, but it shut down after Mr. Borges was arrested on federal corruption charges. Mr. Scaramucci has since given the money to the Lincoln Project and teamed up with Repair.

The crowded, competitive space of party-less anti-Trump Republicans is, in some ways, a product of the fact that not having a party means not having any clear leader. Groups with similar missions engage in little coordination or sharing of resources.

The groups’ leaders say this is all fine, and organic. Mr. Schott’s competitors in the conservative anti-Trump space say there is little downside to another player spending $1 million on advertising critical of the president.

But what is less clear is whether more coordination among the anti-Trump Republicans — who harbor deep worries about what would happen to the country if Mr. Trump were re-elected, and are eager to be seen as having been on the right side of history if Mr. Biden wins — would better serve the collective project to unseat the president.

“The Never Trump movement is having a moment,” said Lucy Caldwell, a Republican strategist who served as an adviser for Mr. Walsh’s failed Republican primary challenge to Mr. Trump this year. “But on the whole, the last four years have been a lot of throwing spaghetti against the wall and seeing what sticks, and a lot of head chefs in the kitchen.”

Ms. Caldwell said a lack of coordination had meant “a lot of duplicative efforts in areas like digital, paid and earned media, with virtually no significant or coordinated effort in areas like field, or building a killer data set that everyone is making use of and enhancing.”

The fact that the groups operate as islands of resistance is, perhaps, underscored best by the setup of the Lincoln Project, where almost the entire staff has spent the pandemic in a Covid-tested pod in Park City, Utah, that some refer to as “Mountain West,” where employees work and live together.

Steve Schmidt, a founder of the Lincoln Project, said some of the smaller political action committees might seem like “vanity exercises.” But the groups, he said, “are all disaggregated, they’re all organic, and they’re all conviction-based and necessary to show defiance and opposition to a president and political class that’s completely enabled him.”

Sarah Longwell, a founder of Republican Voters Against Trump, said the diversity of the groups helped create a broader narrative about opposition to the president. “People want to be counted, people want to be on the record saying they, in this moment, stood up against Trump,” she said. “That’s why you see this. It’s a discredit to Trump that there are so many groups.”

The various anti-Trump Republican groups have also, at times, been in competition for the people who can bring the most attention to the cause. Mr. Scaramucci at one point wanted to start a PAC with George T. Conway III, a prominent conservative lawyer who has become an outspoken and popular Trump critic. Mr. Conway, who had also worked closely with Ms. Longwell on setting up another anti-Trump group he started called Checks and Balances, ended up joining the Lincoln Project instead.

The result is a disparate landscape of groups doing complementary, but sometimes overlapping, work in trying to peel away Trump voters. People in the movement said this was partly because the groups have slightly different goals.

Republican Voters Against Trump has focused on testimonials from former Trump supporters explaining why they’re reluctantly voting for Mr. Biden in November, with the aim of creating a permission structure for white, college-educated Republican voters in the suburbs to follow suit.

The Lincoln Project’s buzziest ads are designed for the proverbial “audience of one” — Mr. Trump — and aim to play on the president’s own preoccupations. For instance, Rick Wilson, a founder of the Lincoln Project, claims partial credit for the president’s decision in July to demote his longtime campaign manager, Brad Parscale, after the group ran an ad highlighting his lavish lifestyle.

“He was a fairly immovable force in the campaign until we started beating the drum that he was driving a Ferrari and Land Rovers and he bought a $2.5 million house,” Mr. Wilson said.

Mr. Schmidt said the goal of the ads — the group has spent or reserved $16.9 million of television time this year, according to campaign finance records — boiled down to buying time for Mr. Biden by making the president waste news cycles defending himself, or worrying about the intentions and the loyalty of the people he surrounds himself with.

After Mr. Schmidt on Twitter compared Senator Marco Rubio to “the type of man who would have gladly held Castro’s coat if it helped him rise, just a little,” another conservative anti-Trump writer, Matt Lewis, accused Mr. Schmidt of acting “just as bad as Trump” and sounding “just like him.”

But the group’s founders said they had also recently spent more money on an initiative targeting Puerto Rican voters in Florida, and planned to spend millions targeting Black male voters in Philadelphia, a bloc that Mr. Biden needs to turn out for him.

Ms. Caldwell said some of the tensions within the coalition stemmed from its players’ having different hopes for the future of the party, “a reality that will probably be much more obvious when they find their next acts, postelection.”

The Biden campaign, meanwhile, has continued with its own outreach to Republicans. The campaign introduced “Republicans for Biden” during the Republican National Convention, and has featured Republican voters in its own ads. The campaign’s national security, political, surrogate, paid media and field teams are all doing dedicated outreach to soft Republican and independent voters, an official said.

Despite all of the options, Mr. Schott still decided to start his own group rather than join forces with anyone else.

“To me, it’s just having another voice,” he said in an interview. “It’s saying, ‘Here’s yet another group of Republicans that are saying it’s OK to vote against Donald Trump.’ More voices saying it is better.”