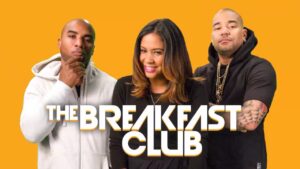 GO TO The Breakfastclub

The Breakfast Club is an American syndicated radio show based in New York City hosted by DJ Envy, Angela Yee, and Charlamagne tha God. It currently airs in over 90 radio markets around the country and is also televised by Revolt every morning. Common topics of discussion on the show are celebrity gossip (especially in the hip hop industry), progressive politics, and sexual and dating issues.