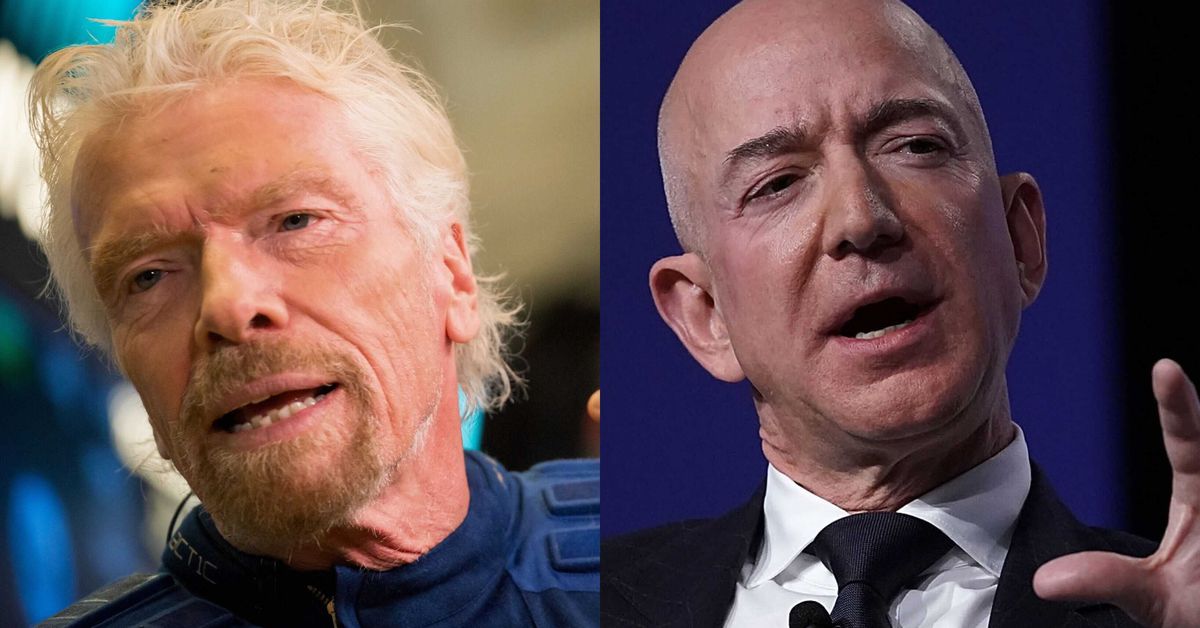 Ever since Virgin announced it’d try to fly its founder Branson to space nine days before Bezos flies on his own rocket, Blue Origin has been on a warpath to discredit Virgin’s suborbital spaceplane, publicly attacking everything from the vehicle’s peak altitude to the size of its windows. Blue Origin’s CEO Bob Smith wished Branson well after Virgin’s announcement, but alleged he’s not really going to space — “they’re not flying above the Kármán line and it’s a very different experience.”

The Kármán line, 62 miles above ground, is the boundary of space recognized by the Fédération Aéronautique Internationale (FAI), a Swiss organization that sets global rules for air sports. Blue Origin’s New Shepard rocket launches its crew capsule just beyond the Kármán line for a few minutes of weightlessness, while Virgin Galactic’s SpaceShipTwo spaceplane flies 55 miles high — just over the boundary of space defined by the US government. So, both companies say they fly to space, just by different standards.

From the beginning, New Shepard was designed to fly above the Kármán line so none of our astronauts have an asterisk next to their name. For 96% of the world’s population, space begins 100 km up at the internationally recognized Kármán line. pic.twitter.com/QRoufBIrUJ

Blue Origin tweeted a colorful chart on Friday, two days before Branson’s flight, comparing Virgin Galactic’s spaceplane to Blue Origin’s New Shepard on window size, vehicle type, escape system, and other factors. “From the beginning, New Shepard was designed to fly above the Kármán line so none of our astronauts have an asterisk next to their name,” the company said in its tweet, implying Virgin Galactic’s SpaceShipTwo passengers can’t call themselves astronauts. The company continued, suggesting the Kármán line is a legally binding international standard: “For 96% of the world’s population, space begins 100 km up at the internationally recognized Kármán line.”

Asked where it pulled the 96 percent figure from, a Blue Origin spokesperson clarified in an email to The Verge that they subtracted the US population from the world’s population, because the US follows a different standard than the FAI, the Switzerland-based organization. “The US Air Force is the only government agency that has consistently recognized a lower altitude as the boundary of space (80 km / 50 miles),” the spokesperson added. In reality, both NASA and the FAA, a US government agency that licenses Blue Origin launches, also use the same 50-mile standard for recognizing the boundary of space. It’s worth noting that Blue Origin is based in the US and is generally required to follow US spaceflight standards.

“This pissing contest about the Karman line is so childish”

Virgin Galactic didn’t immediately respond to a request for comment on Blue Origin’s tweet. But Nicola Pecile, a Virgin Galactic test pilot, hit back, saying in a now-deleted tweet, “this pissing contest about the Karman line is so childish that is getting really embarrassing to watch. Flying above 100K ft is already so complicated that anyone doing so should deserve a special recognition.” In another tweet, he cited Virgin Galactic’s first spaceflight with humans in 2018 and added that Blue Origin “has flown only mannequins so far.”

The “pissing contest” on Twitter was only the latest fight in a month full of snark and sass between the two billionaire-funded space tourism companies as each gears up to fly their respective billionaire founders to space. Virgin Galactic’s decision to fly Branson on July 11th was widely seen as a PR move to beat Bezos’ launch to space on July 20th. Branson was originally poised to fly on a later flight, likely a few months from now. When Branson was asked on CNBC last week whether he’s trying to beat Bezos to space, he replied: “Jeff who?” (It was the same initial response SpaceX CEO Elon Musk gave when asked a similar question in a 2016 BBC interview.)

Blue Origin’s tweet on Friday reignited online discussion about where the boundary of space should be set. Interpretations vary greatly between fields of study — a meteorologist may argue space begins much lower than where a planetary scientist would set the bar. But for human spaceflight, the US has long maintained that 50 miles is the appropriate altitude for space to begin, and the point where a person can earn their “astronaut wings.”

Jonathan McDowell, a Harvard astronomer and expert tracker of space objects, argues in a 2018 academic paper that space begins at 50 miles above ground, based on physics and roughly the minimum altitude for orbital objects. In a phone call with The Verge, McDowell pushed back on Blue Origin’s claim that a vast majority of the world’s population believes space begins at the FAI’s 62-mile marker and that it’s an “internationally recognized” standard. While most space-faring nations might agree with the FAI’s standard, it doesn’t represent a large chunk of the world’s population, he says.