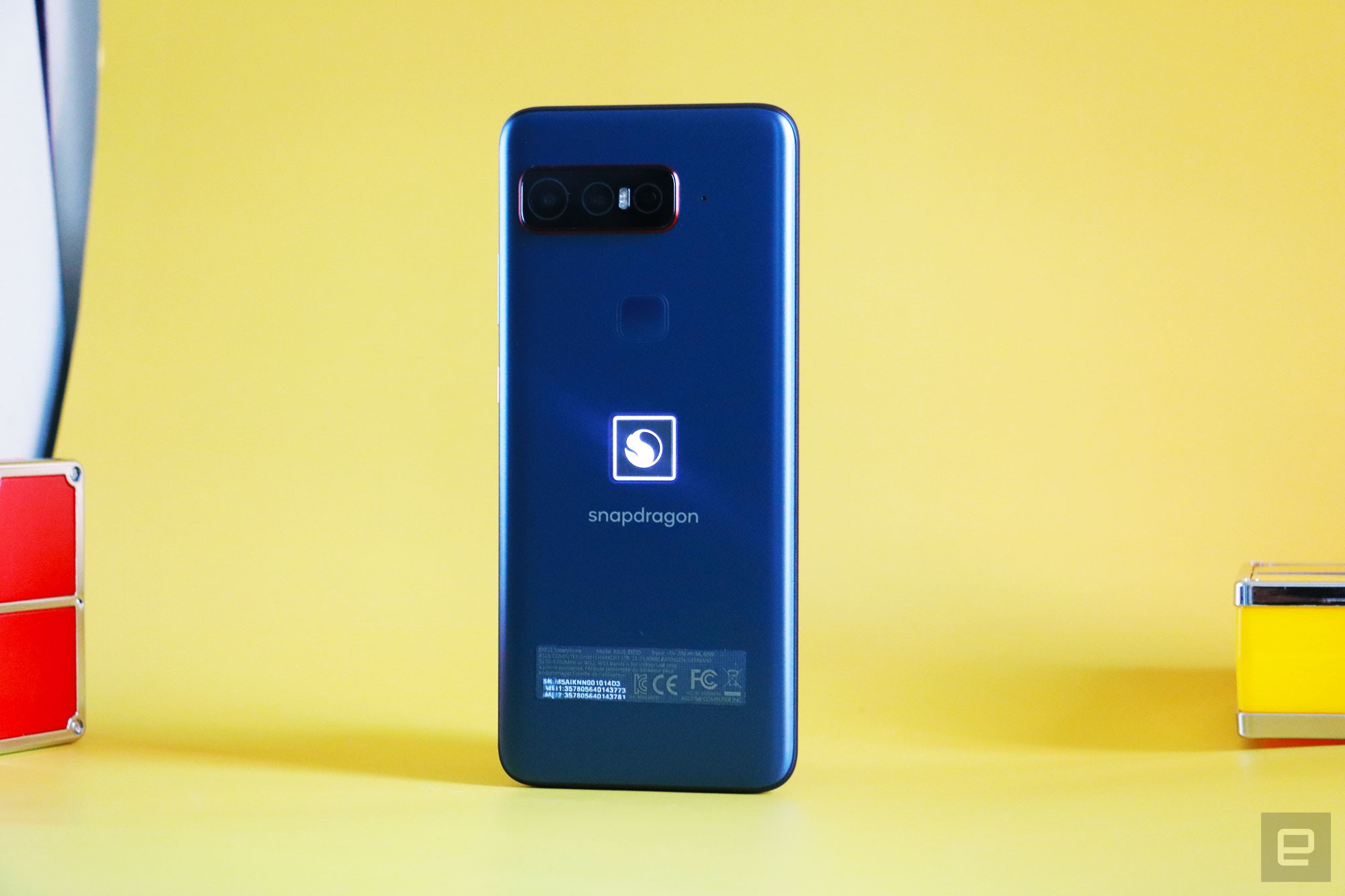 With major phone manufacturers like Apple, Google and (in some regions, at least) Samsung building their own processors, Qualcomm’s premium Snapdragon CPUs are facing stiffer competition than ever. But there are still some companies that still need those chipsets — ASUS being a notable example. The Taiwanese electronics giant’s ROG phones have high-end components aimed at the most demanding users and mobile gamers.

That’s exactly the audience for the new “Smartphone for Snapdragon Insiders,” a phone that Qualcomm built with help from ASUS “for its fans”. It boasts features like a 6.8-inch screen with a 144Hz refresh rate, comprehensive 5G support, fast charging and special audio enhancements. Clearly, this $1,499 device is a showcase for Qualcomm’s strengths, and though its name says it’s for Snapdragon Insiders, anyone can buy it. But should you? 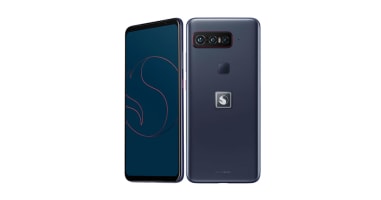 That depends on a few things, one of which being your preference on phone sizes. This is a big phone. At 210 grams (or 0.46 pounds), the Smartphone for Snapdragon Insiders (which I’m going to call SSI from now on) is one of the heavier phones I’ve used recently. Many devices with such large screens tend to weigh about the same — the Galaxy Note 20 Ultra is lighter, but the iPhone 12 Pro Max and Galaxy S21 Ultra are actually even heavier.

The SSI also looks notably different from the iPhones and Galaxies which, depending on your taste, could be a good or bad thing. Its rounded rectangle body has a matte blue finish with shiny red accents on the camera bump and volume button. And you know how bezels for selfie cameras went away over the last two years on most flagships? That’s not the case here — there’s still a thin border above the screen where the sensor sits. That, combined with the silhouette and finish, make the SSI look pretty outdated.

Another polarizing feature on the SSI is an illuminated Qualcomm Snapdragon fireball icon on the rear, below the fingerprint sensor. You can set the light to “breathe” (i.e., glow on and off), turn it off altogether, or have it stay on all day. Even when it’s not lit, though, the logo is pretty obvious. It adds clutter to the phone, and made feeling for the fingerprint scanner confusing whenever I wanted to unlock the device without looking at its back.

One last note on design: The bump for the SSI’s triple-camera array on the back is a surprisingly compact horizontal row that’s neatly tucked away in the top left. It’s smaller and thinner than those on the Galaxy and iPhones, though it still protrudes enough that the handset doesn’t lie flat when you put it on a table.

Topping the list of the SSI’s premium specs is its display. The AMOLED panel is from Samsung, and it runs at 2,448 x 1,080. It also refreshes at 144Hz, which is one of the fastest on modern smartphones, beating the Galaxy S21 and Note series, not to mention the iPhone family. To ensure that you’re shooting at your enemies as quickly as you can tap on them, the display also offers a 1ms response time.

I furiously scrolled up and down on the Engadget homepage, as well as my Instagram feed, and the display kept pace with my finger. Shooting at my enemies on League of Legends Wild Rift was similarly responsive, and a first-person shooter like Call Of Duty was also satisfyingly speedy.

Since it’s an AMOLED panel, it also delivers vibrant colors and deep blacks on videos and photos. Its peak brightness of 1,200 nits also makes for easy viewing under sunlight. It’s worth noting, though, that the 20.4:9 aspect ratio causes some content to be cut off — the ends of long messages in Telegram, for example, disappear into the edges of the screen. Qualcomm doesn’t appear to have optimized its display to accommodate all apps.

The Smartphone for Snapdragon Insiders is one of the first to feature Qualcomm’s Snapdragon Sound technology, which promises low Bluetooth latency, multiple listening profiles and smart amplifier software. It also has four mics and Qualcomm’s “High Dynamic Range Audio Record,” which the company says is capable of delivering studio-quality recording. The SSI comes with a pair of wireless Master and Dynamic earbuds, too, but most of the audio enhancements will work through the phone’s speakers too.

The Master & Dynamic headphones were built using Qualcomm’s Bluetooth Audio SoC and will support high-res 24-bit 96kHz audio with active noise cancellation. Qualcomm also said these should stay connected to your phone even if there are lots of other RF devices around, so audio drop-outs should be minimal.

I haven’t visited many busy places during my testing, so I can’t vouch for how well these headphones stay connected in those situations. Plus, the headphones that Qualcomm sent reviewers were pre-production and do “not reflect commercial-ready Snapdragon sound quality.” The company said that when the devices do ship later this month, they’ll have features like high-res audio and super wide band voice for greater call clarity. For now, though, all I can say is the earbuds perform fine. Songs like “Say So” by Doja Cat and “Next Level” by aespa also sounded richer than on the Pixel Buds 2.

The SSI itself also delivered loud and clear audio, though I don’t usually expect great quality from phone speakers since I rarely play music through them. Sound effects and background tracks on games and YouTube videos rang out nicely, and that’s pretty much all I need from a phone’s sound system.

Like many modern flagships, the SSI has a trio of cameras on its rear. The 64-megapixel main sensor with f/1.8 aperture is accompanied by a 12-megapixel ultrawide option and an 8-megapixel telephoto. That’s a pretty typical setup, though the main camera here is sharper than those you’ll find on iPhones and Pixels.

Qualcomm said an over-the-air update is coming later this month that will enable, among other things, a full resolution mode for better “snapshot performance.”

Other enhancements that the update is supposed to bring include “better texture/noise performance,” “improved night shot quality,” “Video Super Resolution,” “upgraded camera tuning” and “best autofocus experience.” The company said it will also “fully optimize” HDR via the ultra-wide and telephoto cameras and multi-frame noise reduction. That’s far too many things coming that could sway how I feel about the camera, and I wish they were available to test before the phone hits shelves later this month. For now, I’m supposed to take Qualcomm’s word for it and that’s not how reviews work.

Without the updated software, the SSI delivered lackluster photos that paled in comparison to the Note 20 Ultra and Pixel 5’s. The Qualcomm phone’s images had a blue (sometimes green) cast and weren’t significantly sharper or clearer than the Pixel’s, which costs hundreds less. Google’s portrait mode is also superior, and it never failed to keep the lantern fly I was taking pictures of in focus. Meanwhile, the insect came out blurry in 90 percent of the shots on the SSI.

One thing I was able to test is a unique Auto Tracking mode. Qualcomm re-architected its AI engine to run machine-learning-based tasks better, and one of these features is an Auto Zoom tool in the camera. When you use the Auto Tracking mode, you can tap on the viewfinder to designate a subject, and the camera will automatically adjust framing to make sure your pet or loved one is always in the scene.

And by the way, this isn’t an autofocus tool that makes sure your kids or fur babies always look clear. Qualcomm’s method will actually zoom in and out to give your selected subject the spotlight. When this worked, like when I shot a clip of our video producer, Brian Oh’s adorable dog Zen as she ambled around the room, it was lovely. The camera zoomed in till Zen’s face took up half the screen and we were staring into her soulful eyes, and zoomed out when she moved out of frame so we always saw her.

But in my testing, the system was not always good at identifying people’s faces and separating them from the background. That would be fine if it simply didn’t do anything in those cases, but the resulting footage was nauseatingly jerky and looked like the camera was searching for the subject. This is a nice tool in theory, but even if it worked perfectly I’m not convinced I’d use it much.

Another thing I’m not sure I like is the 24-megapixel front camera. Sharper sensors are nice in general, but the better clarity here didn’t make a big difference over selfies shot on other phones. Again, I don’t know if the coming OTA update will be effective so I can only evaluate the selfie camera as I’ve experienced it.

With a Snapdragon 888 CPU, 16GB of RAM and 512GB of storage, the SSI has plenty of muscle and ran smoothly for most of my time with it. I encountered occasional hiccups when shooting portrait mode pictures in rapid succession and when trying to shift focus in auto-tracking mode, but those are pretty specific to the camera. When I played League of Legends Wild Rift with screen recording on, the phone never lagged.

It’s worth noting that the SSI often ran hot, though. After a couple of minutes of concurrent gaming and screen-recording, or a few attempts at capturing video in auto-tracking mode, or even just a round of Settlers of Catan, the area below the fingerprint sensor got noticeably warm.

The 4,000mAh battery here typically got me through a day and a half, and sometimes more, which is impressive given its screen size and refresh rate. That’s also in line with most devices in this class, like the Note 20 Ultra and the iPhone 12 Pro Max, and better than the S21 Ultra.

I didn’t go out a lot so I wasn’t using 5G much — if you’re a heavy data user or you set the logo on the back to stay lit all day, the runtime will likely drop. Speaking of, the SSI supports both mmWave and sub-6 5G, though your experience of the speed improvements this brings will depend largely on your carrier and service area.

When you do run out of juice, it won’t take too long to get recharged. Qualcomm includes a Quick Charge 5 adaptor in the box that it says will get you up to 70 percent in 30 minutes or a full charge in 52 minutes. I did get the phone fully charged in under an hour, which is impressive given the generous battery size.

On paper, the Smartphone for Snapdragon Insiders seems like a spec chaser’s dream. But headline features like Snapdragon Sound aren’t ready yet, 5G performance is reliant on your carrier and coverage, while the camera is still pending a major update that may improve performance. Not only does this phone seem like it’s not ready for review, it also feels far too niche. Even demanding users who might like a smartphone like this will get more out of a Galaxy Ultra or the OnePlus 9 Pro. Unless you’re a rabid Qualcomm fan or need a beefy, long-lasting honker of a phone with a 144Hz screen, few people should get the Smartphone for Snapdragon Insiders.