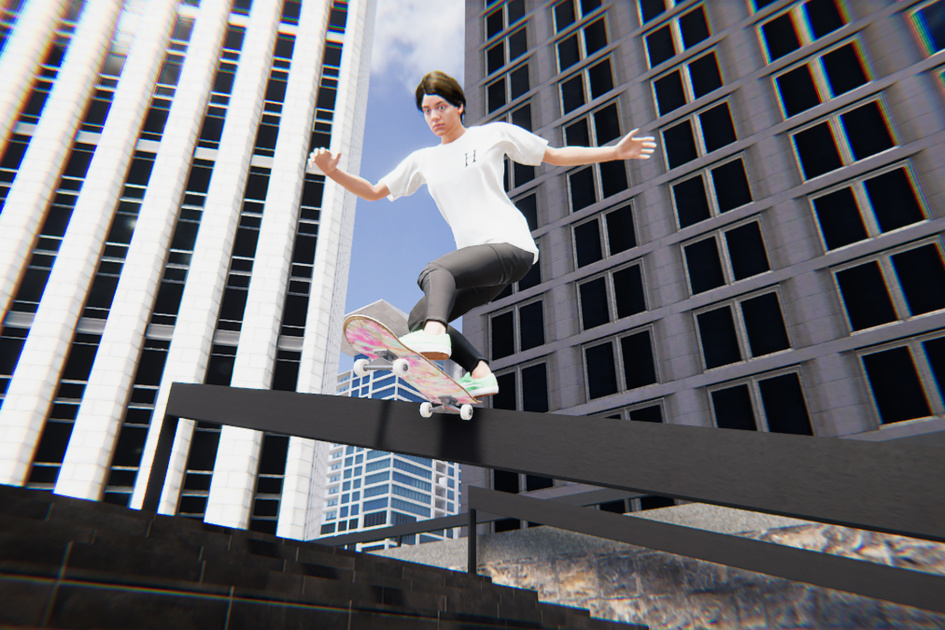 From a distance, Skater XL looks eerily similar to Skate. Both games have a low camera angle, for instance, and hilariously bad ragdoll physics whenever you mistime a kickflip and fall down a long set of stairs. Skater XL’s control scheme is fundamentally different to the Skate franchise, though, because it uses both analog sticks for board trickery. In Skate, the left analog stick was used to spin and generally point your character in the right direction. Skater XL, meanwhile, uses the left and right sticks for your left and right feet respectively. That means something as simple as a kickflip requires both sticks to complete.

At first, this seemingly simple idea is utterly overwhelming. Countless games have ingrained the idea that the left analog stick is for general movement. It took an hour or two for me to override that muscle memory and use the triggers on my DualShock 4 for leaning left and right instead.

Performing tricks, meanwhile, is intuitive, provided you’ve stepped on a skateboard and attempted a heel flip or three before. I skate ‘regular’ in real life, which means my right foot sits on the tail of the board and my left rests about three-quarters of the way up the grip tape. In Skater XL, you ollie by holding the right stick down — the same way you would apply pressure on the tail to ‘pop’ — and then allowing it to move back into its default position. A nollie, meanwhile, requires you to push the left stick forward — mimicking a left-footed pop on the nose — and release in the same fashion. You can then mix in some spins by holding either trigger while the board is still in mid-air.

A kickflip, meanwhile, is performed by flicking down on the right stick (you still need to ‘pop,’ after all) and then pushing the left stick left, mimicking the way that your foot would drag and momentarily leave the deck in real life. If you want to do a heelflip instead, you simply move the left stick in the opposite direction. The movements are effectively mirrored if you want to do a nollie kickflip or heelflip instead. After popping the board with the left analog stick — because your left foot is on the nose this time — you drag the right stick left (kickflip) or right (heelflip).

Almost every conceivable flip trick can be performed with this twin-stick system, including 360 ‘tre’ flips, laser flips, hardflips and inward heelflips. If you can think of it, there’s a good chance it’s possible in the game.

On a flat piece of asphalt, Skater XL’s system feels magically lifelike. The control scheme doesn’t account for all of skateboarding’s complexities, though. You don’t have to worry about shifting your body forwards or backwards, for instance. Kickflipping into a steep bank, for instance, requires no extra button inputs. As long as you have the right speed and timing, your virtual puppet will land just fine. In the real world, however, any sort of gradient makes a trick ten times harder to land. Many people can perform a backside 180 ollie, for instance. But the same trick over a back-to-back ‘spine’ ramp? That’s a serious challenge for most people.

Thankfully, developer Easy Day Studios has put a little more thought into the game’s grabs. Tapping the left and right bumpers will produce a  left-handed melon and right-handed indy respectively. You can modify these basic maneuvers by moving the board around. A nosegrab, for instance, is unlocked by pressing down on the right analog stick — which applies weight to your back foot and causes the front of the skateboard to angle upwards — before tapping the left bumper to move your leading/left hand. If you push the right stick forward instead, the board will tilt in the other direction and make it easier to perform a tail grab with the right bumper/hand.

You can also move the sticks horizontally so that the board becomes parallel with your shoulders. Push the sticks outward and the board will rotate so that your toes are pointing in the direction of travel; do the opposite and you’ll spin so that your feet are ‘looking’ behind you. Tapping the bumper will then produce an advanced grab such as a mute or stalefish. The same stick movements can also be applied on the ground for snowboarder-style powerslides.

Grinds are a little more complicated. There’s no dedicated button and you won’t magically ‘snap’ onto nearby ledges and railings, either. It’s on you, therefore, to approach them with the correct angle and speed. Once again, you’ll have to move your feet to perform something specific. Moving the sticks back, for instance, will force your character to lean on the tail of the board and perform a Five-O. If you want to slide on a part of the deck instead, you’ll need to rotate ever so slightly with the triggers.

Skater XL’s internal logic can be a bit overwhelming at first. To newcomers, I suspect it will feel like tapping your head and rubbing your belly simultaneously. But it’s just that — logical. And if you’re really struggling, there’s an on-screen controller option that paints each stick and corresponding foot in a different color. Once everything clicks you can figure out new moves without consulting an online guide or YouTube tutorial. I was consistently elated whenever I managed to land something new without any in-game prompt or instruction. It felt like the early days of Minecraft, when there were no video walkthroughs and everyone was still figuring out the game’s crafting recipes on their own.

Skater XL does have some trick-centric holes, though. You can’t flip the board halfway and perform a darkslide, for instance. It’s also impossible to hippie jump — a simple trick where you leap over an obstacle and your board rolls effortlessly underneath. (It’s technically possible to hippie flip, though, by performing a regular flip trick through a railing.)

Once everything clicks, you can figure out new moves without consulting an online guide or YouTube tutorial.

The game’s missing tricks are largely inconsequential, though. There’s a huge amount to learn and, more importantly, mix together into devilishly hard combos and sequences. It will be a long time, I suspect, before I can virtually mimic my favorite skateboarders such as Daewon Song and Chris Haslam.

The console version of Skater XL ships with four main maps — Easy Day High School, Downtown Los Angeles, California Skatepark, West L.A. Courthouse and The Big Ramp — and three community-made alternatives. You won’t find any pedestrians or moving vehicles, which is great if you want to practice a particular sequence in peace, but makes each map feel a bit lifeless. They also lack the detail of a game like Insomniac’s Spider-Man and The Last of Us Part II. But that’s fine. It’s obvious that Easy Day Studios has put a lot of thought into the placement of each object, which is far more important in a skating game.

If you’re lacking inspiration, each map has a selection of ‘challenges’ that are split into categories such as grabs, manuals, intermediate and advanced lines. They’re more like tutorials, though, than missions. Some of them are tricky — it took me 30 minutes, for instance, to land a 540 mute off a tiny curved wall at the high school. But they all come with a computer-driven example, complete with an on-screen controller, that you can slow down and study beforehand.

These challenges, however, are the extent of the game’s structure. Skater XL doesn’t have a campaign, story, or any kind of time-based objectives similar to the original Tony Hawk games. You won’t find any NPCs, hidden collectibles or secret areas, either. Heck, the game doesn’t even have a scoring system. That means no combo-based multipliers, high scores and online leaderboards. Admittedly, there’s a built-in video editor that can help you record and share footage online. Otherwise, though, the game is little more than a glorified free skate mode. I don’t mind that — I spent hundreds of hours just coasting around the original Skate — but if you want a more structured experience similar to OlliOlli, you’re probably going to be disappointed.

A big omission, though, is multiplayer. As a teenager, I was drawn to the simple camaraderie of skateboarding and how relaxing it could be to session the same spot or ramp all day. Now, especially in a COVID-19 pandemic world, I would love the option to do that from my living room.

I have no problem with Skater XL’s solitary game mode. The entire package costs $40, after all, rather than $60. The frequent slowdown on my base PS4 was a little harder to excuse, though. The issue is particularly prevalent during challenges, when the computer presents a ghostly silhouette alongside your own skateboarder. A quick glance on Reddit reveals that other players, including those with a PS4 Pro, are experiencing similar frame rate dips.

The character customization options aren’t perfect, either. Easy Day Studios has managed to get a handful of real-world brands involved with Skater XL including Almost, Blind, DC, Emerica, Flip, Lakai, New Balance, Spitfire and Independent. Still, I wish a few more companies were featured in the game, including my beloved Chocolate and footwear behemoths Nike, Adidas and Converse. You can pick a female skater but the hair and clothing options are even more limited. I was also a bit miffed that you can’t change your character’s height or experiment with glasses, tattoos and facial hair.

The game’s soundtrack, however, is on point. I distinctly remember the first time I booted up EA’s Skate and glided down a hill while Band of Horses’ The Funeral played in the background. It felt like a perfect fit for the game’s chilled-out tone, especially compared to the more aggressive rock and hip hop that featured in the classic Tony Hawk games. Skater XL emulates the Skate series with a similarly breezy soundtrack that includes Modest Mouse, Interpol and Silversun Pickups. There’s even a song by Band of Horses, which I doubt is coincidental. It’s not the longest tracklist, though, so you’ll probably want to put on your own tunes after a while.

I’m enjoying my time with Skater XL, and plan to spend many more lazy afternoons experimenting with its brilliant control scheme. But it feels like the foundation for a much larger game. One that has a huge open world to explore, story-driven missions and even more character customization options. Maybe East Day Studios will eventually add those things. If it doesn’t, I’m hopeful that the Skater XL community will pick up the slack. There’s already a bunch of mods for the PC version that change the game’s physics, add custom maps and even online multiplayer.

East Day Studios hasn’t said if mod support will be coming to the console versions of Skater XL. (Something tells me Sony wouldn’t be keen on the idea.) Regardless, the game will tide me over while I wait for Skate 4 and other indie-made efforts to grace the PS4. If you own an Xbox One or PC, you can already check out Session, another game with a Skate-inspired control scheme. (I’m not jealous at all.) Skate Story, a game with Rez-like visuals, and SkateBird, a hilarious title about Tech Deck-riding warblers, are also in production for various platforms. It’s taken a while, but good skateboarding games are finally upon us. Now I can stop pretending that I’m ever going to step outside and start real-world skateboarding again.