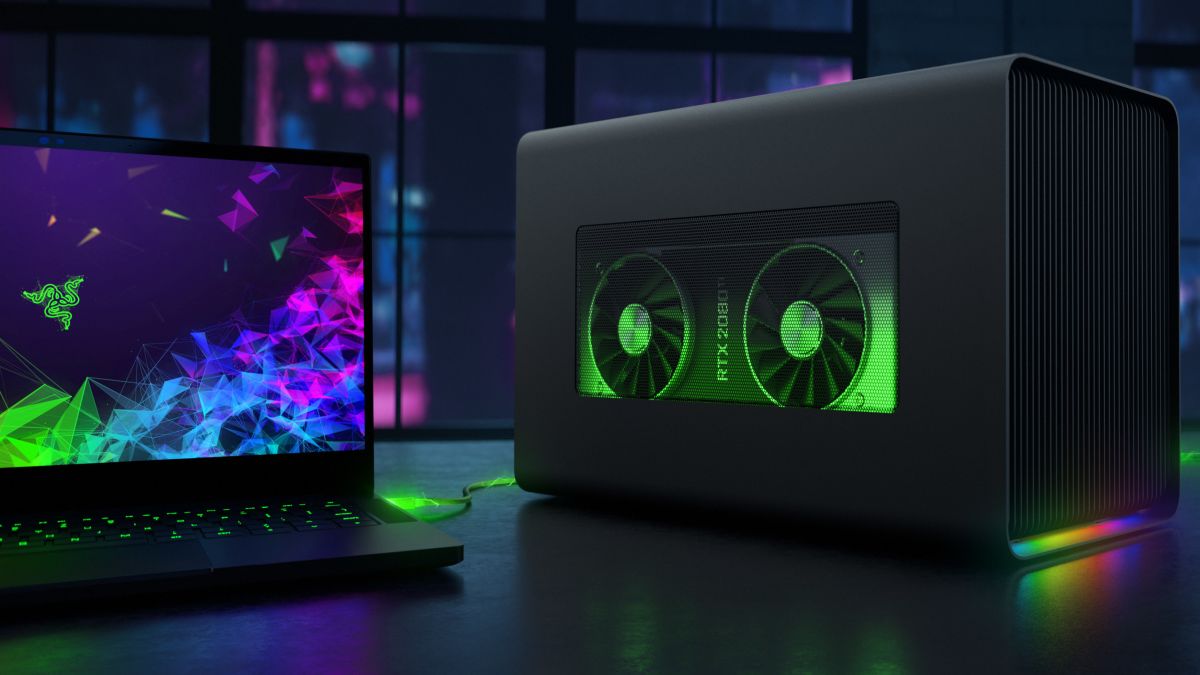 Tech 911Tech 911Do you have a tech question keeping you up at night? We’d love to answer it! Email [email protected] with “Tech 911” in the subject line.

I enjoy playing PC games at reasonable resolutions and quality settings without setting my legs or desk on fire, which is why I typically don’t even think about a laptop’s gaming capabilities when I’m shopping for something new. Why bother, when my desktop (and its discrete Nvidia RTX card) can do everything I need?

There are, however, plenty of people who want to game on laptops that simply aren’t equipped to make the latest titles look good (or possibly even playable). In years past, you’d have to start saving your pennies for a newer laptop that performs better. Nowadays, there’s a second option: an external graphics card that you can connect to your laptop to boost its gaming prowess.

And here’s where we come to this week’s Tech 911 question, submitted by Lifehacker reader “Ghost11.” They write:

I have a question about eGPU’s (external graphics cards). So I was looking to purchase an eGPU and I am finding that the results from google are always showing “enclosures”. I am very confused. My questions are:

An eGPU sounds simple, but it can get a bit complicated

As you can imagine, there can be a pretty big cost difference between these three setups, but not always. For example, consider the Asus ROG XG Station 2: a big, beefy box to house a graphics card you supply for the low price of $550 (or so). This Gigabyte AORUS Gaming Box costs a bit more (+$250), but it comes with a graphics card included. This Razer Core X with a Radeon RX 580? $575.

I mention these, as you can probably tell that the external GPU you’re looking at comes with a built-in graphics card if its price is astronomical—$1,000 on up. Below that, there’s no guarantee that what you’re viewing comes with a card, by default, or if it’s an enclosure that requires you to supply the GPU.

Whether an eGPU comes with a card or not should be obvious when you’re reading through the enclosure’s specs and/or description wherever it is you’re shopping. If you’re unsure, it’s worth reading some reviews or even visiting the manufacturers’ websites to confirm that you’re buying a box+GPU, not just a box (if that’s what you need). Otherwise, spending less money on a duller enclosure might allow you to maximize how much you can spend on a great graphics card to stuff in it—food for thought.

Do you even need an eGPU, though?

Generally speaking, I don’t think you should buy an external GPU at all. They can be hideously expensive for something that gives you adequate-to-decent performance. That, and you’re going to have to figure out where the fine line is between “a great graphics card” and “an expensive graphics card whose normally incredible performance is being bottlenecked by the connection between the external GPU and my laptop.”

As Cameron Faulkner wrote in The Verge’s 2019 review of the Razer Core X Chroma external GPU:

“Capable as it is at quickly moving data, Thunderbolt 3 puts a noticeable bottleneck on a GPU’s bandwidth. It supports four lanes over PCIe, which is significantly fewer than the 16 lanes of PCIe supported on most desktop motherboards. (Some laptops have even less bandwidth on their Thunderbolt 3 ports, so you’ll have to check with your manufacturer’s specs to see exactly what your laptop is capable of.) When you’re gaming on a laptop’s display, the single cable is pulling double duty: the computer has to send data to the GPU for processing, then receive the processed data back to be displayed. Playing intensive games is a huge workload, and, ultimately, even the most powerful graphics cards out there will struggle to display truly impressive frame rates. Despite this, I didn’t notice any choppiness in gameplay.”

Were an external GPU a mere $100-$200 affair, I’d say risk it. When you’re plunking down more than $500, or even $1,000, for an enclosure and a graphics card, you’re getting a temporary and imperfect solution to a problem—one that might not even be directly compatible with your system, given the software peculiarities involved.

Like all desktop PC owners, you’ll eventually have to upgrade your eGPU someday to play the latest and greatest titles at full quality. By then, there might be a better connection type to use (Thunderbolt 4?!?!!?!?!) and undoubtedly a better enclosure. There’s another $500+ down the drain for a new setup; add that together with what you paid previously, and you could have instead built a decent gaming desktop that would support all kinds of newer, faster graphics cards for years to come.

I realize, though, that not everybody wants a dedicated gaming box (and then have to buy a monitor, a mouse, a keyboard, one of those cases that has enough RGB fans to recreate the sun’s brightness on a summer day, et cetera.) But if that’s not an option, and eGPU is a less-practical stopgap for gaming, what should you do?

I wouldn’t write off game-streaming services

Hear me out. The two big game-streaming services out there—Stadia and GeForce Now—don’t cost a lot of money each month ($10 and $5, respectively). If you’re going with Google, you get a chunk of free games each month and the ability to play whatever you purchase on a bunch of different devices, including your computer, your compatible Android phone, and your TV (if you have a Chromecast Ultra, of course).

The same is true for Nvidia’s service, minus the free monthly games. You’ll be able to play a lot of games you might already own (from a decently large list of titles) on your Windows, Mac, or compatible Android devices, as well as Nvidia’s Shield streaming box.

Neither streaming service will do much for you if, say, you’re a big Overwatch player—or love any other title that doesn’t appear on either service (or gets pulled). But if either service has your favorites, they might be worth investigating instead of a more complicated eGPU setup for the time being. And with Microsoft’s xCloud service on the horizon, too, it’s worth waiting to see if these could fill the gaps of a more complicated and costly eGPU setup for gaming.

With streaming, you’ll be able to get years of game streaming for the cost of one external graphics card setup, and all you’ll need is a decent internet connection to experience pretty-good gameplay quality. I think this is more economical than an eGPU right now, at least until the technology allows you to get full, unconstrained desktop performance on a laptop via a simple, plug-and-play-like connection. When that day comes, go external all you want.