Samsung should’ve called these things the Galaxy Beans. What a missed opportunity. With that out of the way, let’s talk about the new Galaxy Buds Live. The company’s latest true wireless earbuds and their unconventional design have leaked extensively over the last few months, and I’ve had many questions along the way. How do you achieve noise cancellation with earbuds that don’t seal in your ears? Can this bean shape possibly feel comfortable?

The $169.99 Buds Live have a style all their own. They’re super reflective in the bronze color, which can look more rose gold in some lighting. But I generally like the look and the fact that Samsung is experimenting. You’ve never worn earbuds quite like these, which means putting them in the first few times feels a bit foreign, and you might overthink it. Turns out, they slot into the concha of my ears quite naturally — the bean design works! — and are both comfortable and stable once there. There are no silicone tips; the speaker points directly into your ear canal. The Buds Live have some silicone stabilizers near the top, and there’s a slightly larger set included in the box if those help the buds better sit in your ears’ contours. 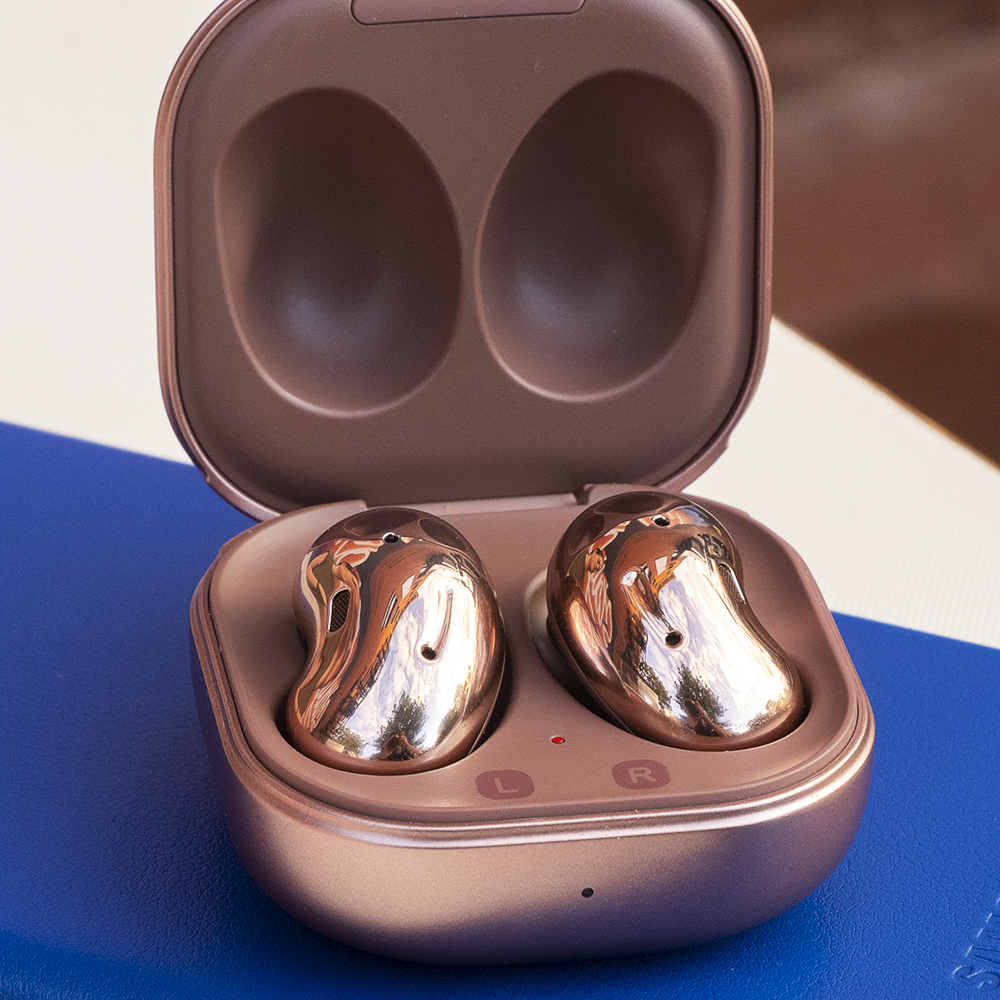 My friend Megan has very small ears and had a difficult time getting the Galaxy Buds Live to fit. I had no such trouble, and I’m one of those people whose ears hate regular AirPods; the fit here is different and wholly unique. I found that the best sound quality and bass performance came when I shoved them as far into my ears as they’d comfortably go.

The tap controls work just like those on the Galaxy Buds Plus: single tap to pause, double to skip, three to go back, and you can customize what a long press does. The Galaxy Buds Live carrying case, which has a USB-C port and wireless charging support, is wonderfully compact, though the earbuds will definitely go flying out if you drop it since they don’t have a very deep cradle.

The AKG-tuned Buds Live have 12-millimeter drivers — larger than what’s inside the Galaxy Buds Plus — and a “bass duct” to help ramp up the low end. Like the AirPods Pro and Google’s Pixel Buds, Samsung also built in an air vent to make them feel as natural as possible without any sensation of being closed off. This spaciousness lends well to audio quality, which is dynamic and full-bodied. I’ve been pleasantly surprised by just how good the Galaxy Buds Live sound. Taylor Swift’s “Exile” collaboration with Bon Iver is a great showcase for these buds, with the distinct vocal qualities of Swift and Justin Vernon both coming through clearly.

Similarly, Jack Antonoff’s production on the new album Gaslighter by The Chicks has plenty of room to breathe, and the harmonies never feel mushed together. Jumping across different playlists and genres, I came away very pleased by the warmth and balance of the Buds Live. If you’re worried about bass, don’t be. So long as they’re in your ears right, the Buds Live can kick out plenty of oomph on the bottom end. These sound excellent and just what I’d hoped for considering the $170 price.

But the noise cancellation aspect of the Galaxy Buds Live is being oversold a bit. To be very clear, these earbuds let in a significant amount of outside noise at all times. That’s intentional and where I think the “Live” part of the name comes from. These aren’t going to drown out your co-workers when we get back to the office someday, nor are they going to be your preferred airplane companions. Samsung says it designed the Buds Live to eliminate very low frequencies — think the persistent hum of an air conditioner or the rumbling of an Amtrak — and you can hear some of that ambient sound get sliced off when you turn on active noise cancellation.

But AirPods Pro or Sony 1000XM3s these are not. You’re still going to hear plenty of the world around you. Some people will like that they won’t have to worry about missing travel announcements or someone trying to speak to them nearby, but I’m more of a tune-out-everything-else person when I listen to music. If that’s you, the Galaxy Buds Plus might be a better choice since they seal in your ears and create more isolation, even without any active noise cancellation. If you buy the Galaxy Buds Live because of the advertised noise canceling, you’ll be sorely underwhelmed and disappointed.

Bluetooth stability on the Buds Live doesn’t seem quite as robust as with the Galaxy Buds Plus. I’ve had the occasional bout of split-second cutouts when walking down the street. It’s not a constant source of frustration, but it happens with more frequency than other earbuds I’ve reviewed lately. I’ve had zero signal problems when relaxing and listening at my apartment, though. Nor do I have any gripes with battery life; Samsung says the Buds Live can last for up to six hours of continuous listening with ANC enabled (21 hours total with case recharges) or eight with it off (29 hours with the case). Those numbers are quite good and beat out the AirPods Pro, but they fall short of the staggering 11 straight hours the Galaxy Buds Plus can last on a charge.

With three total beamforming mics — two on the exterior and one inside — the Galaxy Buds Live have performed just fine during my Zoom meetings and voice calls. Samsung says they also have a “voice pickup unit” in the hardware for improved speech detection. You can use either bud independently while the other is charging in the case.

So there’s a lot of good, but the Galaxy Buds Live aren’t without faults. For one, they’re only rated IPX2 for water and sweat resistance, which is less durable than wireless earbuds from other manufacturers in 2020. I’d be a little worried about them in the rain or if you sweat a lot at the gym. These aren’t destined to be fitness buds, which is disappointing since they’ve got a design that helps you stay aware when out running. And like most other true wireless earbuds besides those from Jabra, the Buds Live can only connect to a single device at a time.

Taken as a whole package, the Galaxy Buds Live exceeded what I came in expecting based on the leaks and the uncertainty I had about what the bean shape would mean for comfort and sound quality. Neither wound up being a concern after actually using them. If you’re okay living with a healthy dose of outside sound when listening to the Galaxy Buds Live, there’s a lot to like.

Photography by Chris Welch / The Verge