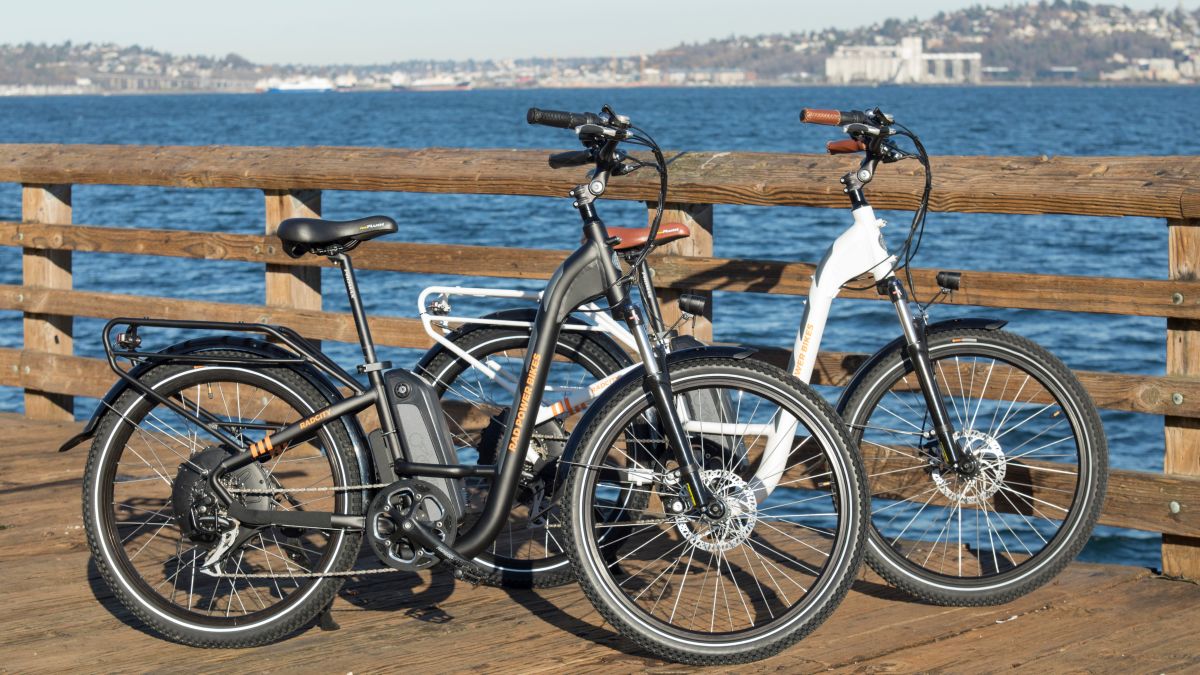 Summer was just barely kicking off. My boyfriend was skating ahead of me on his longboard as I trudged behind—slowly—on my bicycle up a hill. No matter how hard I tried, I could not keep up. I was covered in sweat, annoyed, and over our goddamn excursion to the nearby park. Look, I love bikes, but I fucking hate hills and pedaling up them at snail speed, looking like a goddamn weakling.

This is why I am an e-bike stan. Hills? No problem when your bike has a battery boost. Sweat? See ya never. They make riding so much more fun, especially for those of us who are not like my super athletic and fit boo. The first time I stepped on my brolic e-bike, I felt unstoppable. This time, my boyfriend was the one struggling to keep up. The entire time, I was cheesing hard, in shock at how easy it was to pedal. I reached 25 miles per hour in my local park trail, grateful my face mask prevented me from sucking up any bug snacks. Most importantly, I was in shock at why more people outside of New York City delivery dudes don’t own an e-bike. While it’s true they can be a bit pricey (a decent entry-level bike clocks in at around $1,000), e-bikes are way cheaper than a car.

I don’t own a car, but with the trusty RadCity Step-Thru e-bike that Rad Power loaned to Earther, I feel limitless. It’s the type of freedom that could serve us well as we contemplate our post-coronavirus future in cities and what low- or no-carbon mobility could look like that helps everyone get around in a way that’s actually fun.

In the U.S., the transportation sector is the largest greenhouse gas emitter. If we’re serious about reducing emissions, dirty gas-guzzling cars have got to go. Electric cars can reduce carbon emissions, but they still take up a ton of space on the road and lead to gridlock while also posing a danger to pedestrians and cyclists. E-bikes don’t emit carbon dioxide or other pollutants and reduce risk, which has them well-positioned to help people get around the city cleanly and safely.

“They’re [e-bikes] truly replacing vehicles for some people who can move down to being a one-car family and can feel comfortable riding 4 to 10 miles to work and not have to change when they get there or be able to carry everything that they need,” Morgan Lommele, the director of state and local policy at advocacy group PeopleForBikes, told Earther. “They’re a really wonderful gap between all the benefits and utilities of a car and the freedom and outdoor recreation you get with a bike.”

The potential for e-bikes to become a bigger part of transportation has never felt more strong. The coronavirus pandemic has led to widespread city shutdowns around the world. As places reopen, some cities are rethinking what transit could look like. They’re also seeing ridership on public transit go way down. Just the idea of crowding into a New York City subway like a can of sardines gives me a rush of anxiety even though I know the risk of transmission is low. While cities can certainly fight to win riders back to subways and busses, there are also other ways to help people get around—and it doesn’t have to be just adding more roads for cars.

Not everyone has the luxury of hopping into a car to escape public transportation, nor should that be their only option. Both children and adult bike sales have skyrocketed during the pandemic. In March, both increased by 56% and 121%, respectively. E-bikes haven’t been left out, either. Across the European Union and the U.S., companies have seen record sales, per Electrek.

And let’s face it: Cars are bad! They pollute the air with toxins. They kill more than 1 million people a year. Hell, microplastic from them even ends up in the Arctic. They also take up way too much space with their roads, parking lots, and driveways. In New York City alone, car parking takes up enough space to cover more than two Central Parks, according to a 2017 report. Meanwhile, the rest of us are begging for our 6 feet of space to safely walk or ride our bikes, electric or not.

“The greenhouse gas emissions are wildly reduced compared to using a single-occupancy vehicle.”

In comparison, bikes are low-carbon, healthy, and, well, fun! E-bikes are a little “dirtier”—if you wanna call it that—than traditional bikes because of their lithium batteries, the power they need to charge, and all the materials needed to create the bike, but let’s be real. That impact is far smaller than a car. Plus, once fossil fuels are dead and gone for good, their environmental impact will be even smaller because they’ll run on clean energy. The mining component for a bike’s materials is still a concern, of course, but the perils of the destructive mining industry are a conversation for another day.

“If our end goal is to decrease emissions and create safer streets, then e-bikes are a wonderful solution for that,” Lommele said. “You can look at transportation costs, you can look at the sustainability of the supply chain, do a life cycle analysis of all the various components, and there is an impact to that. But in terms of a transportation choice? The greenhouse gas emissions are wildly reduced compared to using a single-occupancy vehicle.”

Imagine all that would be possible if we opened streets and made all the space devoted to cars accessible to regular bikes and e-bikes. Research in the UK, Sweden, and North America has shown that even minor e-bike usage can decrease a person’s overall carbon footprint. A 2019 paper focused on Portland, Oregon, found that if e-bikes made up just 15% of the average person’s vehicle share in the city, carbon emissions citywide would drop by more than 11%, amounting to 336,147 tons of carbon per year.

“In our original research, we asked [people] what do they like most about using their e-bikes,” John MacArthur, a research associate at Portland State University’s Transportation Research and Education Center who worked on that paper, told Earther. “People wrote in—because I didn’t have this in the survey—that it was fun… We realized that that ‘fun’ really promoted behavior change. It promoted more use of the bicycle. If the person found the activity fun and enjoyable, then they were going to use the e-bike more and for more purposes.”

I can relate. E-bikes aren’t just fun, though. They’re the future. In a carbon-free world where cities are less car-centric, e-bikes will be the personal vehicle of choice for the short trips that most city dwellers take to work, dinner out, or the grocery store.

Much like people decide today whether to buy a minivan or compact car, future people will get to choose the e-bike that best suits their lifestyle. The choices are already starting to multiply. With Rad Power alone, there’s the RadWagon if you want to use your bike for grocery runs or to take the little ones to school or the RadRover if you’re looking for more of an off-road adventure. Bike shares across the country are also including e-bikes at docking stations, including Citi Bike here in New York and Jump and Lime bikes found in other cities.

Many of Rad Power’s customers don’t look to their bikes to lower their carbon footprint. They look to these bikes because they make life easier and more fun, which fits with MacArthur’s research. The environmental benefits are just an added bonus.

The company saw its April 2020 revenue grow by 297% compared to April 2019, Radenbaugh said. Meanwhile, VanMoof, a more luxurious e-bike company, saw the French government ban one of its advertisements because it paints the car industry in an honest light: dirty, dangerous, and downright deadly. E-bikes have got the car industry shook, y’all.

If e-bikes are to replace cars, they’ll need programs to incentivize ridership. The federal government could subsidize buying them, similar to incentive programs for electric cars. Programs like this already exist in some American cities like Burlington, Vermont, and in countries ahead of the curve like the UK. These types of programs are essential to equity and making sure that those individuals who need a bike most (and couldn’t even afford a car if they wanted one) can get one.

As a motorcycle enthusiast who recently sold her 2007 Honda Shadow, I am loving riding an e-bike. It’s the closest I can get to that rush of wind on my face, whether I’m simply taking a ride to the park or journeying 15 miles out to Brooklyn. Cars may be stuck in their annoying traffic, but I slide right on through. The only annoying part? Carrying this 60-pound big boy up my flight of stairs. Luckily, my fit-ass boyfriend—whom I now leave behind in the dust!—takes care of that for me. Thanks, boo.