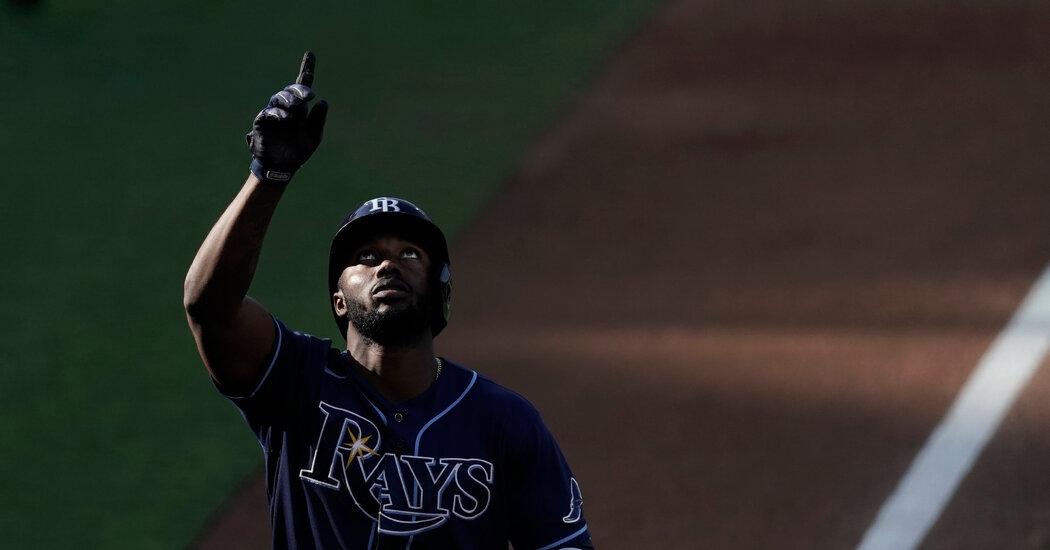 SAN DIEGO — Randy Arozarena was born in Arroyos de Mantua, a small town on the northwest coast of Cuba, a four-and-a-half-hour drive from Havana. He has fond memories of dancing in the streets and playing soccer, his first love, with his brothers and his friends. He remembers his father watching him play for the Vegueros de Pinar del Río, a professional Cuban baseball team. His nickname is El Cohete Cubano (“The Cuban Rocket”).

Make no mistake, Arozarena is Cuban. But deep down, his heart has become intertwined with the country only 30 minutes away from San Diego’s Petco Park, where he has starred over the past two weeks and powered the Tampa Bay Rays into the World Series.

Mexico is where Arozarena, 25, found a home after fleeing Cuba on a small boat five years ago, where his daughter was born two years ago and where he started a journey that vaulted him to the major leagues last year. And one day, he hopes to wear the country’s uniform in international competitions.

“I feel like I represent Mexico,” he said in Spanish during a recent interview. “I have a daughter in Mexico, and I’d do it in honor of her and for the part of my career that I spent in Mexico, and for all the friends I’ve made in Mexico.”

Arozarena’s experience is familiar to many of his fellow Cuban-born players in Major League Baseball. The island is their homeland, but dozens have escaped the communist country to chase their dreams, often putting their lives in the hands of smugglers or taking harrowing boat rides.

After Arozarena said his father died unexpectedly of an allergic reaction to shellfish in 2014 and he began feeling alienated by his team in Cuba — he was left off Pinar del Río’s roster for the 2015 Caribbean Series in Puerto Rico despite hitting .291 as officials feared he might defect — he decided that he needed to leave to provide for his mother and two younger brothers.

So in June 2015, Arozarena said, he took an eight-hour boat ride and saw waves over 15 feet en route to Isla Mujeres, just off the coast from Cancún. Defecting Cuban baseball players must establish residency in a third country before they can be cleared by the U.S. government and sign as free agents with an M.L.B. team. From where Arozarena lived in Cuba, Mexico was the shortest journey.

The list of people he knew in Mexico upon his arrival: “No one.”

Through an agent, Arozarena was eventually connected to Guillermo Armenta, then a scout for the M.L.B. Scouting Bureau who also oversaw player development for the Toros de Tijuana of the Mexican professional baseball league.

The first time Armenta worked with Arozarena, in Mérida — the largest city on the Yucatán Peninsula, not far from where Arozarena first arrived — he saw the athletic potential. Armenta said a skinny Arozarena first ran the 60-yard dash in 6.9 seconds, as fast as an average major league player. He eventually improved his time to 6.38 seconds.

After being asked to train Arozarena a few more times, Armenta convinced him that he should come to Tijuana to develop at the Toros’ academy, which had sent other prospects to major-league organizations.

At the academy, Armenta said, Arozarena had so little to his name that he shared cleats and batting gloves with another prospect during workouts. He grew frustrated as M.L.B. teams scouted him and gave him looks in private work outs but declined to sign him.

One day, Armenta jokingly gave Arozarena what he thought was an impossible challenge: A team will sign you, he said, if you can walk on your hands from home plate to first base. Arozarena announced that he had done gymnastics in Cuba, flipped onto his hands and did it.

“I thought, ‘Wow, this kid is a super athlete,’” Armenta said.

After struggling in his brief Mexican League debut with the Toros — five games in 2016 — Arozarena starred for their feeder team, the Toritos, winning a batting and stolen bases title, and refining his power stroke. The St. Louis Cardinals signed him to a $1.25 million contract.

Arozarena made his major-league debut with St. Louis on Aug. 14, 2019, and hit .300 in 20 at bats over 19 games. Tantalized by Arozarena’s talent, the Rays traded for him, coughing up their top pitching prospect at the time.

His Rays debut this year was delayed until Aug. 30 because of a positive coronavirus test. While isolating, he said, he loaded up on chicken and rice — all he knew how to make — and did 300 push-ups a day. And although he wasn’t an everyday player upon his return, he earned regular duties by hitting .281 with seven home runs in only 23 games.

“He came here without anything that he has now,” Armenta said from Tijuana in a phone interview. “But look at him now. That’s Randy.”

In the postseason, Arozarena has been by far the best hitter in the Rays’ offense. He blasted three home runs in five games to help topple the Yankees in the American League division series. And in a celebratory dance competition set to Michael Jackson’s “Billie Jean” after Tampa Bay won the series, Arozarena beat his teammate Brett Phillips by busting out the moves — including spinning on his head — that he used to do with his brothers and friends back in Cuba. It was the type of joy that has come to exemplify the Rays and Arozarena this postseason.

“Life is too short,” he said. “And that’s what how we do it: enjoying every moment that life brings.”

In the A.L. Championship Series against the Houston Astros, Arozarena crushed four more home runs and was named the series most valuable player. His seven postseason home runs broke the record for the most by a rookie in major league history, topping Evan Longoria’s mark with the Rays in 2008, the last time Tampa Bay reached the World Series.

“Everybody is just in awe every time he steps into the box,” Rays catcher Mike Zunino said of Arozarena. Rays Manager Kevin Cash said Arozarena’s accomplishments were more impressive given that he had no previous experience against many of the pitchers.

Arozarena wouldn’t be doing this if not for his formative time in Mexico. At the Toros’ academy, he grew not only as a player but as a person. Teammates and staff members there helped him buy his first cellphone and open social media accounts (he is now active on Instagram and hosts Facebook chats with fans).

Before the Rays swept Toronto in the best-of-three first round of the 2020 playoffs, Arozarena posed for a photo with a friend he hadn’t seen since their days together at the Toros’ academy: Alejandro Kirk, a Mexican catcher with the Blue Jays.

“He’s Mexican because of his love of the homeland,” Armenta said of Arozarena.

If Arozarena had his way, he would still play in the Mexican winter leagues, as he did for the Mayos de Navojoa in Sonora in three previous off-seasons. He said he loves living in Mérida because it is tranquil and the warm weather year round reminds him of his native island.

His family is around, too: his brother, Raiko, plays for the Cafetaleros de Chiapas, a third-tier Mexican soccer team, and his mother makes him Cuban food often — although he still indulges in his favorite Mexican dish, carne asada tacos.

But of course, Arozarena is not. The only bond he feels with his homeland, he said, is the family and friends he left behind and the little town where he was born “where everyone knows me and everyone loves me, and where they loved my dad and I’m proud of being from.” He added that “the situation in Cuba is bad.”

Last year, President Trump reversed an agreement negotiated by the Obama administration in which M.L.B. and the Cuban Baseball Federation had eased the path for players to compete in the United States without defecting. Arozarena said he still hopes conditions will improve one day for all Cubans, including ballplayers.

“There’s a lot of Cuban players that want to represent Cuba, for example, in a World Baseball Classic or an important tournament, but because of politics, they can’t,” he said, adding later, “For my part, I wouldn’t represent Cuba until everything changes.”

Until then, Arozarena has a few more goals: Win a World Series, have his mother watch him play in the major leagues in person, and become a Mexican citizen. He said he had already taken the citizenship test and was waiting to hear back in order to apply for a passport. He has time: The World Baseball Classic originally scheduled for 2021 was tentatively postponed two years because of the pandemic.

“I’m Cuban, but it’d be an honor for me to represent Mexico,” he said, “and for my daughter.”