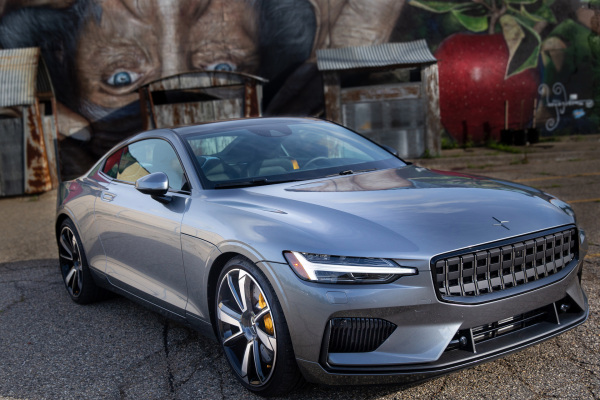 The Polestar 1 is stunning inside and out. But it drives even better than it looks.

This is a driver’s car. The Polestar 1 is an electric hybrid sports car, and yet it doesn’t feel like a hybrid. The power plant in the Polestar 1 is fascinating and delivers power in a way that’s different from any other electric or hybrid sports car I’ve driven. It feels like a proper gas-powered grand tourer that can keep up with the best from BMW, Mercedes and Audi.

You’ll swear there’s a V8 in the Polestar 1. And that’s a good thing. Put your foot down, and the car plows forward with the confidence of internal combustion. The power delivery is not digital with an on-or-off feeling familiar in electric vehicles, but rather, it’s organic and fluid. Hit 45, and the torque seemingly increases, mimicking the soul of a balanced gas engine. The Polestar 1 feels more like a Corvette than a Tesla Roadster. And to me, for the first time, I have hope that the future of motoring can be efficient and enjoyable.

The Polestar 1 is a fantastic vehicle full of dumb flaws, but it gets one thing right: The hybrid powertrain in the Polestar 1 is genius. It’s spectacular and foreshadows a future where cars can change their identities to match a driver’s tastes better.

The Polestar 1 is surprising in some ways. During my time with the vehicle, I found myself lost in its balanced power. It’s smooth off the line and confident at speed. The 600 hp power plant is bottomless and yet restrained where needed. This car won’t beat a Tesla Model S to 60 mph, and to me, that’s ideal. As I learned from Polestar, the engineers used clever software to restrain the 737 ft-lb of torque and allow the powertrain to deliver the power pleasingly.

But first, some context: Polestar is an off-shoot of Volvo, designed to explore the possibilities of electric vehicles. The company’s first car is the Polestar 1 featured here. The company’s second vehicle, Polestar 2, is a pure electric sedan that will compete with the Tesla Model 3. The Polestar 2 will be available in the coming months, and has an electric range of 275 miles with a starting price of $59,900. The Polestar 1 is a hybrid vehicle and starts at $155,000.

Polestar is following a similar strategy used by Tesla. Like Polestar, Tesla’s first vehicle was a limited-run sports car, the Roadster. From the Roadster, Tesla expanded its line to more accessible vehicles like the Model S, Model X and, finally, the Model 3. Essentially, Tesla (and now Polestar) built the sexy sports car for attention, and an affordable car people need will follow.

And much like the Tesla Roadster, the Polestar 1 has a bunch of quirky shortcomings. In the Polestar 1, the sun visor only tilts down — it cannot pull out and twist to the side. The Polestar 1’s door handles pop-out when the driver approaches the vehicle — sometimes, other times, they do not, and occasionally, they remained popped out from the car after I closed the door.

I experienced a random assortment of error messages from the Polestar 1. Sometimes, the car would beep to have the passenger buckle their seat belt, even though the passenger seat was empty. Other times, the check engine light flashed. And when one of the tires lost air, the vehicle flashed a warning, but I was unable to see the exact tire pressure to help gauge the urgency of the notice.

One more complaint: The trunk is tiny, and I don’t think it can hold more than one set of golf clubs.

And even with these shortcomings, the Polestar 1 is fantastic. It feels alive in a way that’s missing from most hybrid or electric cars. It’s balanced and controlled and has endless potential.

The Polestar 1 is a tourer. It’s designed to be comfortable and controlled on endless road trips. Tourers like the Polestar 1 are among my favorite types of cars. Most are broad and sweeping. In the best, the driver feels like a part of the massive machine, working in tandem with engines, motors and gears to achieve a common goal. This is often achieved through a competent chassis and potent powertrain, which is the same formula used in the Polestar 1.

The Polestar 1 powers off the start line with the torque pushing the riders into their seats. As speed increases, the torque increases, much like a small-block V8. At speed, the Polestar 1 settles into a groove, seemingly able to maintain any cruising speed. It carves through curves with balanced steering and capable cornering.

The hybrid powertrain comes alive on open stretches of roads. It’s not rowdy or boisterous, but understated and robust. It’s not jerky, but sublime. It’s intoxicating.

Representatives from Polestar explained to me that engineers used several techniques to deliver an enjoyable driving experience. For one, the software is used to restrain the instantaneous torque generally produced by electric motors. Second, the car’s gearbox utilizes gearing designed for long hauling, not drag racing. Because of this design, the Polestar 1 is slightly slower to 60 mph than some competitors, and yet, it’s fast enough with a 0-60 time of 4.2 seconds.

Like most cars, the Polestar 1 has several different driving modes. In pure electric, the vehicle has a range of 60 miles — the longest such range of any gas-electric hybrid on the market. In this mode, the Polestar 1 is silent and effortless. In hybrid mode, the power is plentiful but not overflowing. In Power mode, the Polestar 1 transforms into its true self as one of the best grand tourers available.

Car bros often lament about the coming age of the electric vehicle. I understand the pessimism. Electric cars often feel digital, and for most people, driving is an analog experience. Electric motors provide a thrilling experience but often lack a sporty enjoyment. The Polestar 1 achieves both.

Polestar knows the Polestar 1 will not sell in large numbers. With a starting price of $155,000, it’s selling against the best from Porsche, BMW and Mercedes. For one, I wouldn’t get a Polestar 1 over a fully equipped Porsche 911 or BMW 8 Series. That said, Polestar is only making 1,500 of this initial vehicle.

The Polestar 1 is beautiful and looks like nothing on the road. The hood is long and wide with the back-end stout and robust. The design is clean and straightforward. Hints of Volvo’s involvement are evident throughout, from the expansive front-end to the sweeping taillights to the infotainment system.

The future of motoring is electric, but that’s miles down the road. That’s okay with me. Cars like the Polestar 1 prove that gas engines still have a place in a world striving to be more energy efficient. Automotive development is evolutionary rather than revolutionary, and in the case of the Polestar 1, it’s a big step in the right direction. The software used to tune the hybrid powertrain foretells a future that’s as pleasing as what’s currently available from Europe’s best.

The Polestar 1 sits in an odd spot. It’s not a mass-market vehicle thanks to it very high price, and it’s hardly competitive against vehicles in its price range, too. That doesn’t stop it from standing tall as a fantastic vehicle regardless of its price. It’s exciting as a technical marvel more so than an obtainable commodity, and in the world of motoring, it’s cars like this that stand the test of time. The Polestar 1 is a future classic.