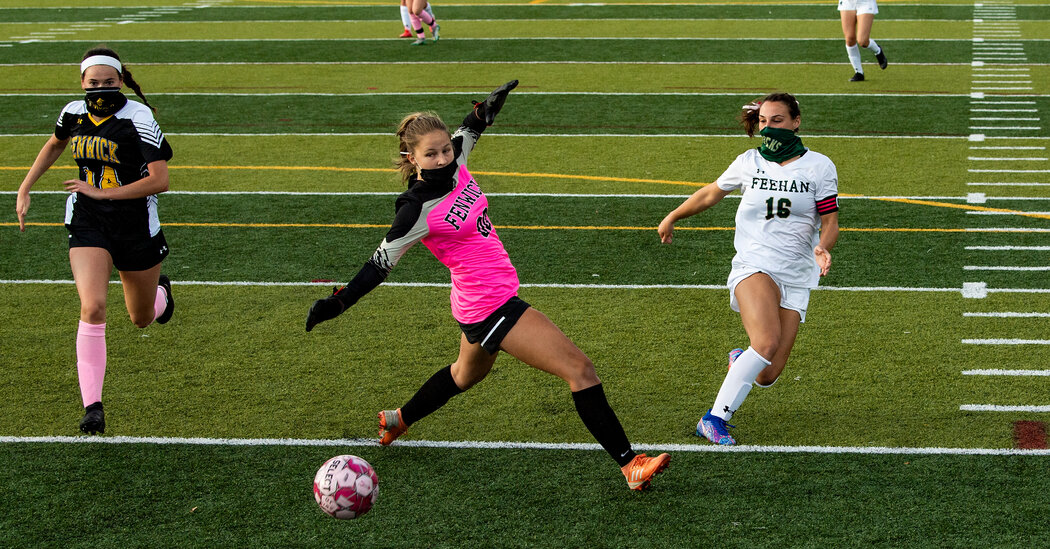 You’re still not allowed to touch the ball with your hands.

But in many other important ways, the soccer being played by Massachusetts high schools this fall differs significantly in shape and form from the soccer known and played around the rest of the world.

No physical contact. No slide tackles. No headers. No throw-ins. Six feet of distance between players is required whenever play is restarted — in other words, no walls or close marking on free kicks. And to top things off, everyone on the field must wear a mask at all times.

Sports leagues across the country, from youth leagues to the pros, are implementing safety protocols this fall to try to play games amid the coronavirus pandemic. Some guidelines, on things like sharing water bottles or high-fiving or locker room use, are common sense in the coronavirus era. Others are more extreme: In Vermont, for example, high schools are playing seven-on-seven football this year, and volleyball matches are moving from indoor gyms to outdoor courts.

But few have taken things as far as the state of Massachusetts, which unveiled its unusual rules for soccer on the eve of what is shaping up to be one of the strangest high school sports seasons in memory.

“It’s crazy,” said Francesca Yanchuk, a senior forward for the girls’ team at Bishop Feehan High School in Attleboro, Mass., who has had to unlearn some of the skills that helped her secure a scholarship to play at Villanova next year.

The rules caused a statewide stir when they were announced in late August by the Massachusetts Interscholastic Athletic Association, which oversees sports for almost 400 high schools in the state. They were not produced in haste: Rough drafts were shuttled from sports committees to medical committees and back again as the rules were being completed. But as the season neared, an M.I.A.A. official said, the organization was ultimately handcuffed in terms of what it could allow.

The fateful moment came in August, when the state agency in charge of the latest phase of reopenings released its guidelines. Sports officials noticed almost immediately that they included a prohibition on “deliberate contact.”

“I don’t know if you’ve seen soccer,” said Tara Bennett, a spokeswoman for the athletic association, “but that’s how you play soccer.”

Not anymore. The rules sent coaches to their drawing boards to figure out how to play what is essentially a new game.

“It was a weird hybrid between soccer and girls’ field hockey,” Zach Siano, the coach of the boys’ soccer team at Belchertown High School, said about his team’s first game on Wednesday. (Two of the team’s first three games were postponed because of coronavirus precautions.) “It was a little difficult to watch.”

Siano, whose team won a state championship last year, said the opposing team scored easily on a free kick from 20 yards because it largely went undefended; under the new rules, defensive walls are not allowed. And he said defenders were already cynically stopping dangerous attacks by triggering one of the new coronavirus contact fouls.

That may actually be the only way to stop talented strikers this season. Yanchuk, 17, scored a hat trick in each of Bishop Feehan’s first two games. Last season, she said, she was constantly bumped, knocked down or tripped by defenders hoping to slow her down, but this year she has not had to worry about contact.

To offset some of the new advantages for attackers, Silva moved one of his best defenders, who is one of his fastest players but also one of his shortest, from outside back into the center, where she could help neutralize newly unshackled opposing forwards.

There, he said, “it doesn’t matter that she’s 5-foot tall because she doesn’t have to head a ball.”

Complicating teams’ adjustments to the new rules were other ones mandating that practices, at least initially, could take place only with players divided into groups of five to 10 players. “I have a coach’s binder with a thousand drills that’s useless now,” Siano said.

Karissa Niehoff, the executive director of the National Federation of State High School Associations, said she had yet to see another state this year where the core rules of a sport were so drastically changed.

For the most part, states resuming high school sports were doing so with basic safety rules, though a few, including California, have postponed fall seasons altogether.

Niehoff said that while consistency in sports across the country was typically an important goal, associations were being given a “hall pass” this year, given the complicated challenge of adhering to state health and safety protocols that vary widely.

“But I think if this were a normal year, we absolutely would scratch our heads a little bit and reach out and say, What’s your rationale for this level of alteration?” Niehoff said about the modified soccer rules in Massachusetts.

Many are scratching their heads anyway.

“I don’t think it’s made the game more socially distant,” said Silva, the Bishop Feehan girls’ coach, noting that players were still bunching up on the field. “To me, putting masks on but keeping the rules the same would have been a much easier way to create a safe environment while still playing the game as it’s supposed to be played.”

But Silva said the biggest problem for him so far was the sheer number of stoppages in games. On top of all the new fouls, throw-in situations have now become indirect free kicks (which must be played on the ground) and referees regularly stop play to enforce proper spacing.

Referees, too, are having to adjust. Several said communication and patience were more important than ever as everyone gets on the same page.

“One of my favorite rule interpreters constantly talked about Rule 19, in a sport that only has 18 rules,” said Jim Quinn, the president of the Eastern Massachusetts Soccer Officials’ Association. “Rule 19 is common sense.”

Like players and coaches, referees will have to break old habits to enforce reimagined game protocols. Among the changes:

Mario Pineda, a referee from Worcester, got his first taste of this new game last month while officiating a preseason scrimmage. He said he had to call only about three traditional fouls the entire game, but whistled more than 30 Covid-19 violations. Five were for illegal headers; the players, he said, simply forgot they were no longer allowed.

He also stopped play three times to request a sanitized ball after the one in play inadvertently hit a player’s hand. “It’ll be a lot of pressure on the referees,” Pineda said. “There will be complaints, obviously.”

Still, most of those affected seemed to have come to the same conclusion: Playing by the new rules is better than not playing at all.

“We’re kind of the guinea pigs,” said Sue Hendee, who has coached the girls’ team at Wilmington High School, north of Boston, for 33 years. “Nobody has tried this.”