The Pixel 6 is the most intriguing phone Google has made in years. Not only is it a return to premium design with eye-catching colors and up to a 120Hz screen, it’s also powered by the company’s first mobile processor — Tensor. With it, Google is promising serious improvements in AI performance and photography, including better voice recognition and Assistant features.

Google also finally upgraded the Pixel’s camera hardware instead of just relying on its processing smarts. That’s not to say it’s overlooked software this year. The Pixel 6 is stuffed to the brim with special photography modes. The best thing about the Pixel 6 series, though, is the surprisingly low starting price, and it makes the few drawbacks easier to forgive. 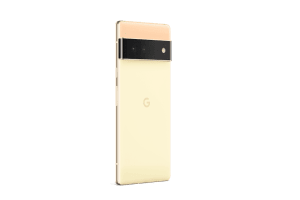 I’m torn over the Pixel 6’s design. Compared to the last few generations, these are an arresting change of pace. The two-tone palette is pretty, especially on the smaller Pixel 6, which has more fun color options. It also has a flat screen with a matte finish on its sides while the Pro has pleasantly curved, shiny edges and feels a lot like the Galaxy Note 20 Ultra.

Google’s horizontal camera bar here is polarizing. I don’t mind it, but I know many people think it’s hideous. In its defense, it not only houses larger sensors, but it also makes for a more symmetrical design than the corner camera bumps on every other flagship. And as a bonus, it doesn’t wobble when resting on a tabletop.

Aesthetics and style are all subjective, but no one can argue with hard numbers. At 207 grams (or 7.3 ounces), the Pixel 6 is heavier than the Galaxy S21 and the iPhone 13, though not by much. The Pixel does have a larger 6.4-inch screen, though, and I wish it was smaller since previous generations (and other companies) all offer a one-hand-friendly size. Meanwhile, the Pixel 6 Pro weighs 210 grams, which is much lighter than the iPhone 13 Pro Max and the Galaxy S21 Ultra.

Both the Pixel 6 and 6 Pro have lovely OLED screens. The standard model has a 6.4-inch 1080p panel that runs at 90Hz, while the Pro uses a 6.7-inch display that goes between 10Hz and 120Hz depending on what you’re doing.

Most flagship phones have adopted OLED by now, and in general offer excellent image quality. The new frontier for displays is refresh rate, and the Pixel 6 Pro’s 120Hz screen is as buttery as the iPhone 13 Pro and Galaxy S21 Ultra’s. Scrolling through Twitter, Instagram and articles on the internet is satisfyingly fast.

The Pixel 6’s 90Hz refresh rate does make it feel a little slower, but you won’t notice if you haven’t been spoiled by 120Hz screens. If you’re upgrading from an older phone, the 90Hz panel will be an obvious improvement. Plus, this thing costs just $600, so no gripes here, especially since the iPhone 13 is $200 more and runs at 60Hz.

I’m also not going to complain much about the Pixel 6’s speakers, which are decent. Vocals were clear in Steve Aoki and Jolin Tsai’s Equal in the Darkness, though the mix could sound messy at times and lacked bass. Lil Nas X’s Industry Baby held up a little better.

Under the Pixel 6’s display is a fingerprint sensor, and unfortunately it’s slow and finicky, especially compared to in-screen readers on recent Galaxy and OnePlus devices. You also can’t log in with your thumb when the screen is off, meaning unlocking your phone is a two-step process: Wake the screen, then scan your print. Google could stand to take notes from Samsung here. Place your finger on the screen of an S21 and you almost immediately see your home page.

If you’re mad that the fingerprint sensor was relocated, Google said it was mainly to keep the phone’s rear looking uncluttered, while still offering some form of secure biometric authentication.

What truly defines the Pixel 6 experience is its software — an area Google has always excelled. With Android 12’s new Material You UI, the Pixel 6s feel as pretty inside as they do outside. The most obvious flourish is its ability to theme the entire interface around a color palette it extracts from your wallpaper. We’ve discussed this many times in our previous coverage of the Android 12 beta, so I won’t go on and on about it here, but it makes the OS feel more cohesive.

Android 12 offers many new features that we’ve already tested, like updated widgets, camera and mic privacy toggles, but the company has updates that are exclusive to Pixels as well. The most impactful of these are the upgraded speech recognition algorithms. Transcriptions are more accurate, translations are integrated in more parts of the OS and the keyboard is easier to use hands-free.

As someone who detests typing on a phone, I love the new voice keyboard. It’s better at understanding my rambling monologues and inserting punctuation. Now transcribed text looks more natural, rather than being a long block of words. The system will even retroactively add punctuation to previous sentences while you’re speaking. That said, Assistant still isn’t perfect, and often adds periods where they don’t belong. And maybe this is more of an indictment of the way I speak, but Google seems to think everything I say is a question.

In fact, here’s an example of the above paragraph as transcribed by the new voice keyboard:

“As someone who detest typing on a phone, I love the new voice keyboard. It’s better at understanding my rambling monologues and inserting punctuation. Now transcribe text looks more natural rather than being a long block of words. The system will even retroactively add punctuation to previous sentences while you’re speaking. That said, assistant still isn’t perfect and often adds periods where they don’t belong. And maybe this is more of an indictment of the way I speak, but Google seems to think everything I say is a question”

What makes hands-free typing even easier is the ability to say things like “Send,” “Clear,” “Delete” and “Undo.” I especially love that you can say “Hey Google, type” to trigger the speech keyboard, so there’s no need to touch the screen to reply to your friends. The Pixel 6 also helpfully suggests commands for things like jumping to the next field in a form or setting the subject of an email. Plus, you can add emoji by saying “smiley face emoji” or “peach emoji”.

The new keyboard also makes it easier to fix mistakes. You can’t do this hands-free unless you want to clear everything and start over, but at least you don’t have to exit voice typing mode to select a typo and then tap the speech button to start dictating again. The mic will remain on so you can repeat something with more careful enunciation, and you can use commands like “Delete” to get rid of stray words.

The improvements to voice commands are especially important for those with physical or motor disabilities, and this might make it easier to communicate if you have limited mobility.

Google also expanded its Quick Phrases feature, which allowed you to say things like “Stop” or “Answer” in response to alarms or calls. This feature rolled out first on Google’s speakers and displays, and now on the Pixel 6 you can also say “Stop,” “Snooze,” “Answer” and “Decline.” I know it seems like a minor update, but I appreciate every little addition that makes hands-free interaction with my phone easier.

Another advantage Pixels have over other phones is Google’s time-saving features like Duplex and Call Screening. On the Pixel 6, Google is introducing new Wait Time and Direct My Call tools that tell you how long you’ll have to wait for a customer service rep and converts voice-based menus into on-screen options. Though it’s supposed to work with the top 5,000 toll-free US business numbers, I didn’t see wait times appear for Bank of America, though it showed up for Capital One, Anthem Blue Cross Blue Shield and DoorDash.

The Pixel 6 accurately turned DoorDash’s menu into tappable buttons, too, though it only works in English. “Press 1 to continue in English” appeared, though “Para continuar en espanol, o prima dos” did not, nor did the option to continue “en Francais.”

The company has also integrated its translation engine into more parts of the Pixel 6, like Live Transcribe and the keyboard. You no longer have to use the app or search engine to translate what you need before copying and pasting it into a message.

When I opened a conversation with our video producer Brian, the phone detected that he had written in German and asked if I wanted it to translate. Once I agreed, Brian’s message of “ich liebe dich” was replaced with “I love you.” As I typed out my reply, a separate text field appeared above the keyboard with my words in English being translated into Deutsch. This also worked with the new voice typing, although sometimes it reverted to the old speech keyboard (the microphone icon looks different in the latest version).

Only a few languages like German, Chinese (Simplified), Japanese, French, Hindi, Spanish, Portuguese, Polish, Russian and English are supported at this time. Most chat apps are compatible, too, like WhatsApp, Signal, Line, Twitter, Google Chat, Snapchat and Android Messages. Though, Instagram messages weren’t working when I tried it.

Another area where translation is baked in is Live Captions, which provides subtitles for anything playing through your phone’s speakers. In general Google’s interpretations still aren’t very accurate and sentences come off stilted. In Interpreter Mode, Brian and I had a conversation where I spoke Chinese and he spoke Korean and simply couldn’t make sense of what the other was saying unless we told it to translate both languages to English instead. But it’s not like any other translation software is better.

The phone’s Tensor chip handles all these things quickly, and since it’s all done on-device you can use the features without an internet connection. Lens in particular was very fast at identifying Korean characters on a book and correctly capitalizing the author’s names. And, though it struggled with my handwritten Chinese characters, it was still fairly speedy at showing its English interpretation.

There are a lot of little software updates throughout Android 12 that I don’t have the time or space to go into here, but I’ll quickly shout out new security features like the Anti-Malware and Phishing tool. When someone sends you a suspicious message in WhatsApp, Facebook or Instagram, Google will throw up a warning page like it does in Chrome, reminding you not to transmit sensitive information online to people who might not be who you think they are. It won’t prevent these messages from reaching you, but it’s at least a reminder to be careful (and a great way to diss your friends). There’s also a new security hub that helps you identify what apps are using your personal data the most.