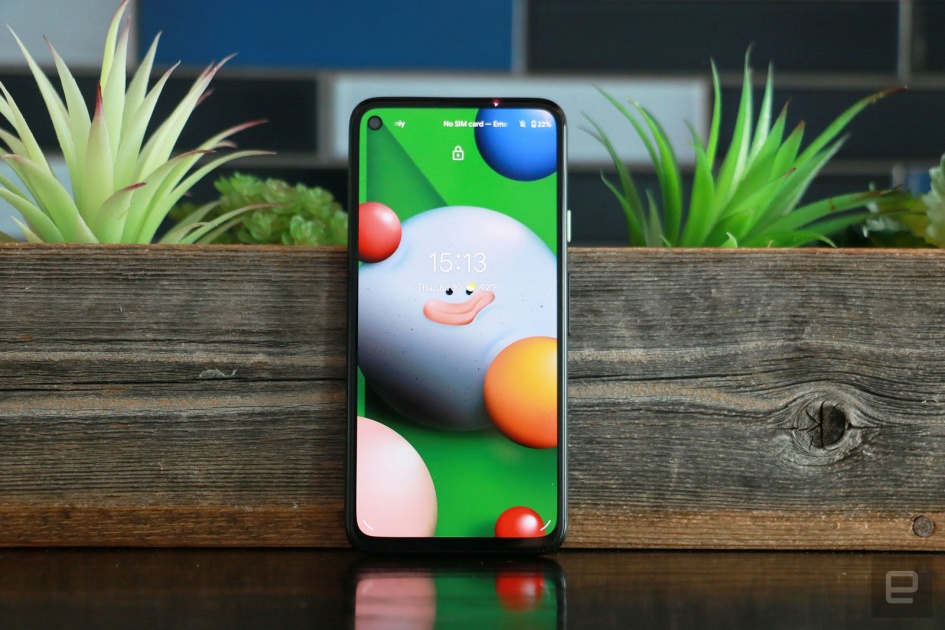 The fact that the Pixel 4a only has a single rear camera puts it at a disadvantage. Both the OnePlus Nord and the Galaxy A51 have quad-sensor arrays, though the iPhone SE also sports just the one camera. Google still delivers superior image quality thanks to its clever software, but I miss the flexibility of switching a wide-angle lens for more-arresting landscapes.

The 4a has the same selfie camera situation as the 4 and as expected, took portraits of similar quality. I miss the secondary wide angle lens that the Pixel 3 offered, but the solo sensor on the 4a isn’t bad. Put it this way — with a wider angle I could get shots of my head-to-toe look, while the 4a can only get head-to-knees. It’s not the biggest deal given we’re not all clamoring to squeeze into group selfies these days, but if self portraits are a priority you might prefer the Nord’s dual front cameras.

In use and Live Caption for calls

One of my favorite things about the Pixel 3a was how well it performed despite using a less-powerful processor. Google cooked up some software magic to make Android fly despite the slower CPU, and did the same with the Pixel 4a. It packs a Snapdragon 730G instead of the Pixel 4’s Snapdragon 855. But both have 6GB of RAM and feel similarly speedy. The Pixel 4a runs Android 10, which isn’t a surprise considering Android 11 is still in public beta.

I jumped from using Amazon’s AR tool to see how various bookshelves would look in my apartment, to having video meetings, to chatting with my friends while watching YouTube videos in picture-in-picture mode and playing too much The Sims Mobile with no delay. The phone rarely even hesitated.

Google’s software tends to make up for its basic hardware, and as usual, the company has some helpful tools that make the Pixel experience better than any other Android phone. Most of these have already been announced, like its personal safety and car crash detection feature, Google Docs integration for the Recorder app, as well as adaptive battery management.

With the Pixel 4a, though, Google is bringing its Live Caption feature to calls. Previously, Live Caption offered onscreen subtitles for all audio playing on your Pixel, except calls. Those are a trickier domain. Since captions can be captured in a screenshot, that would be akin to recording a conversation, which brings up issues of consent.

To work around that, Live Caption for Calls will alert your contact that you’re using the feature when you turn it on. I tested it on several apps, and each time Google’s generic robotic-sounding voice told the person on the other end “Hi, the person you’re about to speak with has call captions turned on. They’ll see captions of what you say to help them listen along.” I was also shown this message on my screen.

That Telegram thing, by the way, was a distinct echo and feedback on my caller’s end. The distortion went away over cellular and in other apps like Facebook Messenger and Duo. Live Caption was also more accurate on the latter three, probably due to the better audio. It was surprisingly still able to hear and transcribe calls even when there was loud (fake) crowd noise in the background. And even when there were mistakes in the subtitles I was able to figure out what was being said through context.

I firmly believe that Live Caption needs to be on every phone (and laptop). Not only is it an important accessibility feature for people who are hard of hearing or deaf, but it could even be useful in a noisy cafe or a subway station (you know, if we ever venture outside again). For now, though, features like Live Caption, Call Screening, Recorder and Personal Safety are what set the Pixel 4a apart from the competition.

One area Google tends to fall short of the competition is battery life, but the Pixel 4a has surprised me on that front. Despite packing a relatively small 3,140 mAh cell, the Pixel 4a lasted 12 hours and 26 minutes on our video rundown test. That’s just shy of the Nord’s nearly 13-hour mark, which has a 4,115 mAh battery.

In real world use, the Pixel 4a easily made it a day and a half. But the Galaxy A51 and its 4,000 mAh battery barely made it a day and the iPhone SE couldn’t even manage that. Once again, Google has shown that clever software tweaks can make up for lesser hardware.