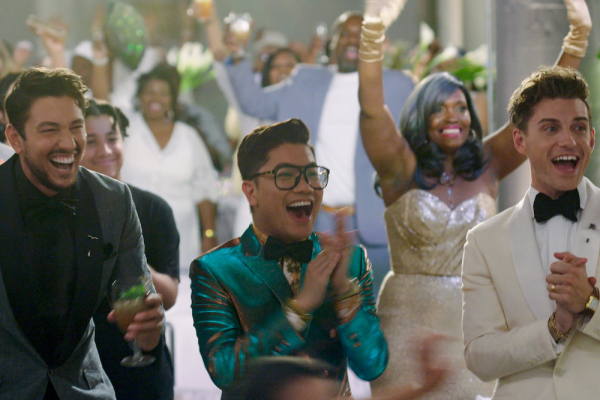 Parts of “Say I Do,” a new reality series on Netflix, will feel pretty familiar to fans of the streaming service’s popular reboot of “Queer Eye.”

Like “Queer Eye,” “Say I Do” stars gay men who are experts in a particular field — in this case, interior designer Jeremiah Brent, fashion designer Thai Nguyen and chef Gabriele Bertaccini. In each episode, the trio is given the only-on-reality-TV task of organizing an elaborate wedding in a single week. And usually, just one half of the lucky couple knows about the wedding until a few days before it’s scheduled to take place.

As we explain on the latest episode of the Original Content podcast, it’s hard to resist comparisons to “Queer Eye,” particularly since “Queer Eye” creator David Collins is an executive producer on the new show.

But “Say I Do” has its own unique charms. Although its hosts aren’t quite as aggressively charismatic as the Fab Five, the trio won us over quite effectively, thanks to a combination of impressive wedding planning and convincing emotional engagement.

Put another way: Nearly every episode ends with its hosts quietly wiping away tears, and the audience will probably find itself joining in, as the show’s focus on weddings proves to be a reliable template for cathartic conversations.

In addition to our review, we also discuss this year’s Emmys, which saw Netflix receiving a record number of nominations.

You can listen to our review in the player below, subscribe using Apple Podcasts or find us in your podcast player of choice. If you like the show, please let us know by leaving a review on Apple . You can also follow us on Twitter or send us feedback directly. (Or suggest shows and movies for us to review!)