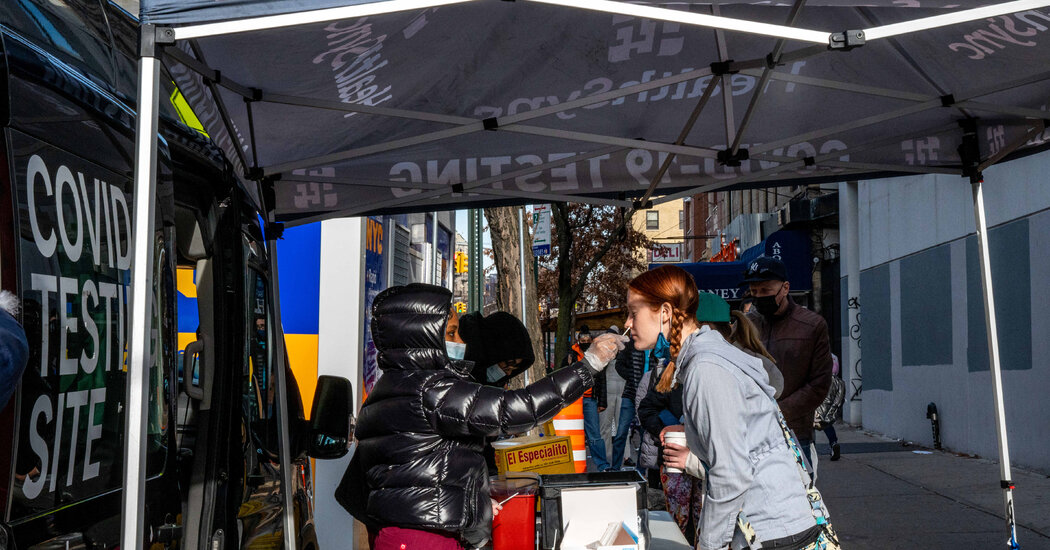 (Want to get this briefing by email? Here’s the sign-up.)

Here are the week’s top stories, and a look ahead.

2. Most of the world’s vaccines provide almost no defense against infection from Omicron, studies show.

3. A five-year Times investigation found that the U.S. air wars in Iraq, Syria and Afghanistan led to thousands of civilian deaths.

Hidden Pentagon records show a pattern of failures in U.S. airstrikes — a sharp contrast to the American government’s image of war waged by all-seeing drones and precision bombs.

The military’s own confidential assessments of over 1,300 reports of civilian casualties since 2014, obtained by The Times, lays bare how the air war has been marked by deeply flawed intelligence, rushed and often imprecise targeting and the deaths of thousands of civilians, many of them children. None of these failures resulted in a finding of wrongdoing. We are making these Pentagon records public.

This is the first of a two-part investigation. Here are the key takeaways.

4. Congress ended its session with divisions as bitter as ever.

President Biden and Democrats can point to some major successes in 2021, including a $1.9 trillion pandemic aid plan with a $300-per-child income support that slashed poverty rates; a $1.2 trillion bipartisan infrastructure law that had eluded the two previous presidents; the confirmation of 40 judges in Biden’s first year, the most of any president since Ronald Reagan; and a House inquiry into the Jan. 6 Capitol riot.

But those achievements were overshadowed by legislative setbacks and a sense that Congress was not rising to meet a perilous moment in history. “It has been a horrible year, hasn’t it?” asked Senator Lisa Murkowski.

5. We’re waiting for election results out of Hong Kong, but the writing is already on the wall.

The election is the first since Beijing imposed a drastic overhaul of the political system to allow only “patriots” to run for office, tightening the Communist Party’s grip over the territory.

Candidates have been vetted by national security bodies, and the establishment’s near-total control of the legislature is now guaranteed. The crackdown has driven most of the city’s popular pro-democracy candidates either into police custody or exile. Officials urged the public to vote, but turnout was expected to be low.

Carrie Lam, Hong Kong’s chief executive, is the territory’s most unpopular leader ever, polls show. Yet she now appears reinvigorated and ready for a second term, if Beijing allows her to stay.

6. Map by map, Republicans are chipping away at Black Democrats’ power.

In several states, a growing number of Black elected officials, from members of Congress to county commissioners, have been drawn out of their districts this year or face headwinds to hold onto their seats. Almost all of the affected lawmakers are Democrats. Most of the mapmakers are white Republicans.

Because partisan gerrymandering has long been difficult to disentangle from racial gerrymandering, proving the motive can be troublesome. But the effect remains the same: less political power for communities of color.

Last spring, Black and Asian groups stood together in response to the violence aimed at their communities. But calls for unity have ebbed over disagreements on one main issue: policing.

7. Si Spiegel can claim a dual legacy: as a war hero and as a father of the artificial tree.

Spiegel, 97, is one of the last bomber pilots of World War II still with us. He flew a B-17 on dozens of dangerous missions, saved his crew by belly-landing in a frozen potato field in Poland and then helped orchestrate a daring escape back out. But, like many other Jewish soldiers, he was denied promotion and, after the war, he was frozen out of aviation.

Instead, Spiegel went to vocational school and found a job as a machinist at a brush manufacturer. His bosses decided to repurpose the brush machines to make Christmas trees. Spiegel would go on to perfect their design and retired from his own artificial tree company, American Tree and Wreath, in 1993 as a multimillionaire. And there’s much more to his extraordinary life.

8. Gen Z is moving away from basketball courts and soccer fields and toward PlayStations and Xboxes. The rise of e-sports is shaking up an entire industry.

Participation in youth sports was declining even before Covid-19. Then, between at-home learning and the shutdown of youth sports, a high-tech generation found even more escape and engagement on its smartphones and consoles. Even the Y.M.C.A. is getting on board: In April, it began a national e-sports pilot program in 120 of its U.S. branches.

In case you missed it: New gaming consoles remain in short supply this holiday season, spawning cottage industries of tipsters and scalpers making money off their scarcity.

9. Need a last-minute gift that’s both laziness- and supply chain-friendly? Look no further than your own things.

Once deemed tacky, regifting is being recast as a more thoughtful and sustainable way to shop. (No one even needs to know.) We asked a group of creatives what they would regift from their collections, and the list included plant clippings, an Oprah 25th-anniversary coffee table book and crystals.

For more ideas, our garden expert Margaret Roach suggests these truly useful gifts for gardeners, our food columnist Tejal Rao has her eye on these veggie-friendly presents and the Wirecutter recommends 27 last-minute gifts.

10. And finally, catch up on our favorite stories of the week.

A teen snowboarding sensation grows up. Tracing a sweater’s journey from Mongolia to Madison Avenue. The 25 essential dishes to eat in New York City. We handpicked these stories and more for you in The Weekender.