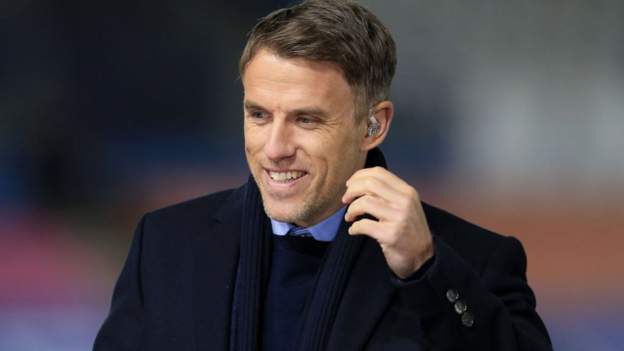 England manager Phil Neville will lead Team GB at the Tokyo Olympics if he does not take the managerial vacancy at Major League Soccer side Inter Miami.

Baroness Sue Campbell, the Football Association’s director of women’s football, said it was agreed in November he would lead Team GB.

Neville steps down as England manager when his contract expires in July.

On Thursday, Inter Miami confirmed the departure of manager Diego Alonso, who “have mutually agreed to part ways”.

“We did make a decision that Phil [Neville] would lead Team GB in November and we were moving towards an announcement when he started to have these discussions,” Campbell told BBC Sport.

“Until those discussions are concluded, I can’t really say any more. If Phil remains, he will be Team GB coach. If he goes, we obviously have something to think about and work through. That is where we are.”

Campbell added that Neville had been “absolutely professional” in his communication with the FA and “has been very open”.

“We have some time on our hands but we all want to know and particularly the players, who are our priority. Once we know the decision about Phil, we will move quickly to find the right solution.”

‘We have to model what is right’

Saturday’s Women’s Super League game between Manchester City and West Ham has been postponed because of positive coronavirus tests.

City reported four players who had visited the United Arab Emirates tested positive earlier this week. Arsenal’s game at Aston Villa on Saturday is also off.

Campbell said she is “personally disappointed” about the situation but stressed it “is a matter for the clubs, not the FA”.

“It is [the club’s] players and it’s up to them to deal with it in the way they see best fit. I’m really keen that we don’t interfere in what is essentially a club issue.

“Do I feel good about it from a personal point of view, as director of women’s football? No I don’t. It’s disappointing.

“When you see the pressures that everybody is under – whether that is the NHS or just people really struggling with mental wellness at home – I think it’s important that every single one of us acts as a role model.

“To beat this thing, everybody has to play by the rules and in sport we should understand that because playing by the rules is what we do every week, in every match. We have to model what is right.”

Campbell said the safety of players “is the number one priority” following reportsexternal-link that the FA is considering coin tosses or the drawing of lots to decide the outcome of the Women’s FA Cup second and third round with the competition currently suspended because of coronavirus.

The second and third rounds of the competition are classed as ‘non-elite’ by the government. Women’s Super League and Championship clubs enter at the fourth round.

“We are in a pandemic and we are in a very serious place,” said Campbell. “As the FA, we have to protect the wellbeing of our players – whether they are grassroots or elite. That is our number one priority.

“We do not believe that either the testing, or the medical support, is there in those grassroots clubs to give us the assurity that we would want that they would be safe.”

Campbell added the FA was not disrespecting clubs or players lower down the pyramid.

“No, I think it’s respecting their health and wellbeing and their future opportunities to play the game. There will be another FA Cup and another year. Sadly, there won’t be another year for many people in this country as we are seeing people die.

“We have made extra effort to respect their wellbeing. I understand their frustration but that is our real, honest commitment – to make sure they are safe.”