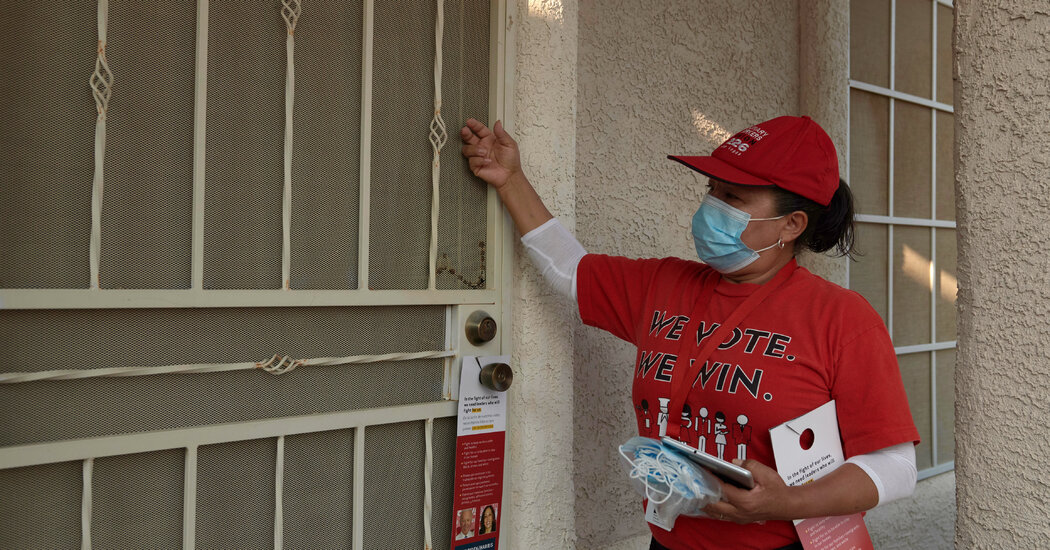 LAS VEGAS — As soon as someone comes to the door, before exchanging any greetings, Elsa Gutierrez hands over a disposable mask. After stepping back a few feet, only then does she ask how the person is planning to vote, and start in on the pitch for Vice President Joseph R. Biden Jr., who has the backing of her union.

In response, she hears stories from people who have lost their jobs, fear getting sick and are frustrated that schools have yet to reopen, though casinos have.

This is what it looks like to hunt for votes in a pandemic.

For the past decade, Democrats in Nevada have notched one hard-fought victory after another. In 2010, Senator Harry Reid won his hotly contested re-election campaign, even as the party lost other battles all over the country. In 2016, Hillary Clinton won the state, though with a smaller margin of victory than Democrats garnered in the previous two presidential contests. And in 2018, the Democrats managed to capture the governor’s office and the State Senate.

Nevada’s Democratic political machine was held up as a model for other states where neither party has consistently dominated. But it was a machine built for another era.

Its success relied on hundreds of people knocking on thousands of doors for face-to-face conversations with voters. Now, there are fewer than half as many people canvassing for Democratic voters as there were in September 2016. And some Democratic strategists warn that Nevada could be in 2020 what Wisconsin was in 2016 — a state that the Democrats assume is safely in their column but that slips away.

“I am saying every day: We are more vulnerable than you think we are,” said Annette Magnus, the executive director of Battle Born Progress, a liberal group that has yet to raise enough money to start the kind of campaigning this fall that it has previously deployed. “We frankly need to fire up our base a little more, and we have so much work in front of us. Nevada does not have the resources we need to do that yet.”

Mr. Biden maintains a slight edge over President Trump in the state, according to new polling from The New York Times and Siena College: four percentage points, within the poll’s margin of error. But Democrats worry about falling short of the kind of enthusiastic turnout they need — particularly among Latinos and working-class voters who make up a significant part of the party’s base here.

In 2016, Mrs. Clinton won Nevada by just 2.4 points — 10 points less than Barack Obama’s margin in 2008. Last week, the Cook Political Report changed its rating of the state from “likely Democrat” to “lean Democrat.” Mr. Trump has indicated he intends to fight for Nevada, holding two rallies over the weekend, including a Sunday event entirely indoors, despite the state’s ban on gatherings with more than 50 people.

Nevada has endured many boom-and-bust cycles in recent years. During the Great Recession, it was one of the hardest-hit housing markets in the country. And the Las Vegas Strip has gone eerily quiet before — both after the Sept. 11, 2001, attacks and when a gunman killed 58 people attending a country music festival in 2017. But lifelong Las Vegas residents say the pandemic has meant the worst of both: deep devastation that came in an instant but will take years to recover from.

This disaster, of course, is also a lethal illness. There have been more than 73,000 cases of the coronavirus in the state so far, leading to more than 1,450 deaths, according to a New York Times database.

When casinos shut down in mid-March, the state’s economy plummeted immediately. With one-third of all jobs reliant on tourism, unemployment topped 28 percent in April, higher than any other state in the country. The unemployment rate now sits at 14 percent, still among the nation’s highest. Tourism is down by roughly 70 percent compared to last summer. Several casinos remain closed and it is unclear if they will ever reopen.

Though they lay blame for the downturn on the Trump administration, Democratic strategists worry that if too many would-be voters are focused on taking care of basic food and shelter needs, they may be less likely to cast a ballot.

Ms. Magnus’s organization focuses exclusively on electoral politics, but for much of the spring and summer she turned her garage into a makeshift food pantry, feeling desperate to do something. Several other political organizers did the same.

After more than 90 percent of members of the Culinary Union, which represents tens of thousands of workers in Las Vegas and Reno, were unemployed in late March, union officials offered assistance with paying utility bills and handed out bags of meat, beans, fruit and vegetables.

Sign up for On Politics to get the latest election and politics news and insights.

Widely considered the state’s most powerful political force, the Culinary Union has built up a remarkably effective turnout operation during elections, helping to get its members to the voting booth for the Democratic candidates it endorses. With roughly half of its members still unemployed, the union needed private donations to fund its election efforts, and Mr. Reid asked donors on its behalf. After weeks of uncertainty, union officials decided they would send out members to knock on voters’ doors — making them the first, and so far only, group in the state to do so for Democrats.

“People are scared and frightened,” said D. Taylor, the head of Unite Here, the Culinary Union’s national organization, who described the pandemic as “absolutely devastating” for members. “We’re not taking anything for granted because the thing we’ve learned is that you’re only as good as your last fight,” he added. “Anybody who underestimates the appeal that Trump has for folks is foolish. Anybody who thinks we’re like California just hasn’t spent enough time here.”

But one unexpected benefit of the crisis, Mr. Taylor said, is that voters are far more likely to answer their doors: Canvassers are successfully speaking to roughly 30 percent of the people they try to reach, compared to about 6 percent in previous years.

Indeed, as union members go door to door just a month before early voting begins, people who would normally still be at work in the late afternoon are home instead, looking for ways to keep young children happy or watching television, and startled when they hear someone arrive unannounced. Because of the red hats Culinary Union members wear, several voters initially mistook them for supporters of Mr. Trump. (The union plans to change the color scheme for canvassers ahead of the election to avoid the problem.)

Roughly one-third of all Nevada voters say they plan to vote by mail, and many Democrats fear that ballots will be rejected because of errors, like when a person forgets to sign the outside of the envelope as state law requires. Supporters of Mr. Trump have indicated that they are far more likely to vote in person than supporters of Mr. Biden, according to the Times/Siena poll.

Though Mr. Biden maintains a solid lead over Mr. Trump among Latinos, who make up roughly 20 percent of Nevada voters, there are signs he has struggled to make the kind of inroads that many Democratic strategists expected to see. The Times/Siena poll found that 49 percent of Latinos said they would choose Mr. Biden, with 22 percent supporting Mr. Trump and another 25 percent saying they back Jo Jorgensen, the Libertarian candidate, or have not decided.

In a recent survey of 600 Latino voters in Nevada, conducted by Equis Research, more than a quarter of respondents said they would vote for Mr. Trump, a slight increase from previous polls. Though more than 60 percent of the voters in that poll said they believed Mr. Biden would do a better job handling the pandemic, health care and immigration, the number dropped to 55 percent when it came to the economy.

The poll showed that the overwhelming majority of voters have not changed their minds since 2016 — 90 percent of voters who chose Mr. Trump in 2016 said they would do so again, while 90 percent of Clinton backers planned to vote for Mr. Biden.

Part of the challenge for Democrats is new voter registration, which has been essential for victory in the last decade, particularly as more Latinos become eligible to vote.

At the start of the year, Mi Familia Vota, a national Latino voting group, estimated it would register 21,000 new voters in Nevada by Labor Day. But the organization stopped doing in-person outreach six months ago. Now, the number stands at around 6,000.

On a blazing hot Saturday, hours before Mr. Trump landed in the state, dozens of volunteers and staff members with the group lined up on a soccer field in the east part of the city, their faces covered by double-layered masks. Before they could go out to register new voters, they had their temperatures checked and picked up bags with bleach wipes, gloves and dozens of pens.

About a third of the group was dispatched to grocery stores and strip malls in the area to register as many people as they could find. But the rest set out to do what they have done more of in the last month, canvassing not to sign up voters but to help find the tens of thousands of public-school children who have not shown up for virtual learning. After four weeks, the number has dropped to about 25,000, from 75,000 when school first began.

“We have had to really prioritize basic survival of many of our most vulnerable members,” said Leo Murrieta, the executive director of Make the Road Nevada, a liberal advocacy group that focuses on Latinos, who have been particularly hard hit by the illness and job losses. “A global pandemic has killed our families, wiped out an economy. We’re doing everything to make sure that this sick and tired frustration shows up at the ballot box.”

In dozens of conversations with voters, there was evidence of a kind of disillusionment. As Ms. Gutierrez knocked on doors in a working-class neighborhood of northwest Las Vegas one evening last week, most voters looked genuinely puzzled when she asked whom they would be supporting, as if it should be obvious. It was not Mr. Biden they were excited about, though — many hardly mentioned his name.

“Not that guy in White House,” said Carol Riley, who moved to Las Vegas after retiring in California.

“Won’t be Trump,” said Alexxa Sanabria, 28. “Not going to choose no racist like what we have now.”

But there were also signs of some of the challenges for Democrats. At one house Ms. Gutierrez went to, Luis Bernal, 19, said he was skeptical about whether he would vote at all.

Ms. Gutierrez implored him to reconsider. “Think about all the people who can be in more pain, all the people in your family who could be hurt, if you don’t vote and he wins again,” she said. Mr. Bernal promised to think about it.