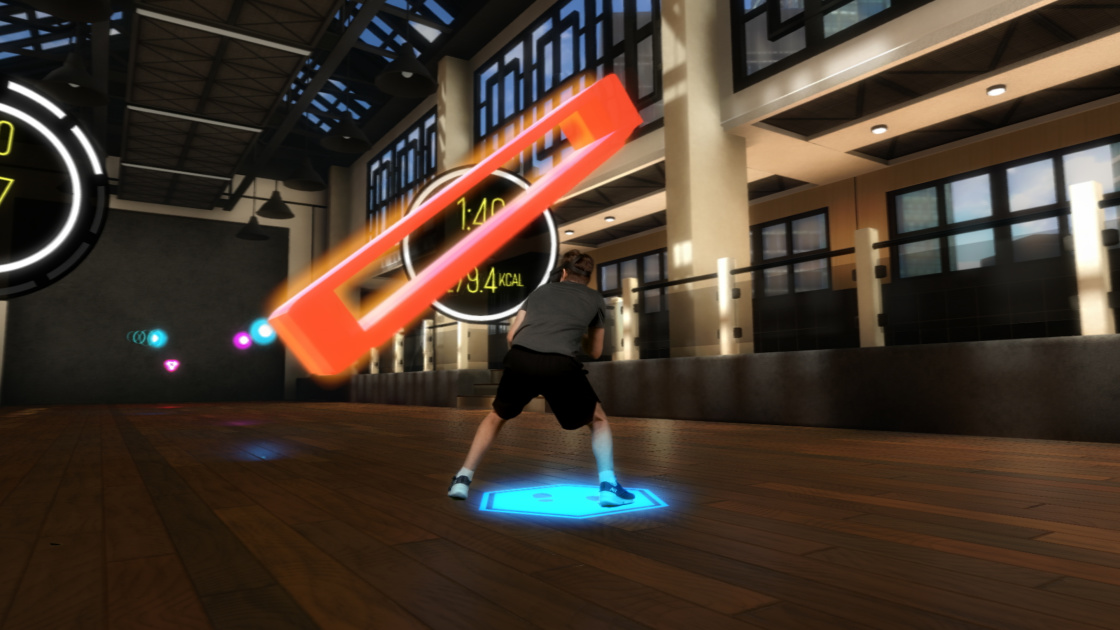 BoxVR workouts land somewhere between those test-your-strength arcade punch cabinets, a boxercise class and, maybe, an arcade shooter. Once you’ve got your stance (a footprint symbol on the floor will direct you as to whether you put your right or left foot first), the soundtrack and the workout begin.

The aim is to hit, block or dodge everything that comes your way. Successful actions stack up on the HUD on the left side of the screen. If you collect enough, these give a boost to your point scores. Get hit (or miss hitting something) and your ‘combo’ gets dinged and you have to start building up your run again.

While a lot of workout games with wands or hand tracking focus on those areas, BoxVR tries to keep it all full-body workout. Yes, neon balloons will shoot towards you, demanding jabs, hooks and uppercuts, but these are joined by “walls” that you’ll need to duck under. These seem set at a good level (given the game can gauge your height) to feel the burn of squatting; it’s always a little deeper than comfortable, but that’s probably good for a workout.

Throughout the session, the game asks you to swap your stance and offer a few seconds of recovery before the next barrage of neon targets. Also, I’m no boxing black-belt (I know that’s not a thing), but these workouts are very much cardio-centric. You’re not going to nail your form and while it helped improve my fitness levels, and possibly responsiveness, BoxVR won’t translate into real-life sparring improvements. There aren’t any coaching cues, and though fitness coaches profiles are matched to classes, I’m not sure what benefit anyone derives from that. Did they program the class?

The game attempts to track how many calories you burn, based on your weight, height and movements. Expect to burn a few hundred calories for more extended workouts.

It’s a VR cliche, but I appreciated the escapism — a workout that’s not a dull run, nor push-ups or handstand holds in my one-bedroom apartment. I am getting pretty sick of these four walls.

With BoxVR, you’re transported to a digital boutique gym that (rejoice!) has no one in it besides you. It feels almost as if it were designed with COVID-19 in mind, even if there are no virtual hand sanitizer dispensers.

When you choose the workout you want, whether that’s the level of intensity or length of the session, you also get to pick the ‘look’ of the gym, which includes a sci-fi-themed landscape if you’d rather keep things gamey.

After a few weeks of workouts on the Oculus Quest, I also tried it on my PSVR. Sadly, it’s not such a great fit on the PS4. The headset is far too heavy, the cables irritate and tangle — it’s all uncomfortable and unwieldy.

That’s why BoxVR, like most VR workouts, works best on the latest (and crucially) lightest hardware. Even then, I found it got a little too sweaty on the longer running workouts — imagine doing a gym class while wearing goggles. It doesn’t matter how light the VR hardware is when you still have to strap it to your face.

Compared to some other titles — we recently tested out the dance-centric Supernatural, but you could add Beat Saber here too — I missed having a soundtrack of more familiar songs and mixes. Now, if you play BoxVR on a PC, you can add your music to workouts — I was pretty envious of this feature.

I haven’t managed to exhaust all the workouts, mostly due to the sweats on longer sessions, but BoxVR now has two different DLC expansions, adding a wider range of both music and workouts. Perhaps disappointingly, it doesn’t offer a major shift in music styles of moves, but in general, these DLC workouts demanded higher levels of skill (not to mention fitness).

The makers of BoxVR have just announced a new VR fitness hub, FitXR. Existing BoxVR users will get a free upgrade to the new ‘studio’ on Oculus Quest, which includes over four hours of boxercise workouts. These workouts are pitched as slightly more elaborate, folding in lunge moves and more classes, but it doesn’t appear to shake things up too much. I’d have loved to see the ability to spar with a trainer and a virtual punch-bag, even if there’s no physical feedback to your swings and jabs. (I’m imagining something like how Sharon Stone gets coached on her tennis serve in Total Recall.)

FitXR’s new hub could help keep you motivated, though, offering virtual fitness classes filled with six other players (or even ghost data) to keep you on your toes and at the top, or middle, of the leaderboards.

Three years on, the company appears to be sticking to on-the-rails punching. Now that VR hardware has evolved, I hope BoxVR (Or FitXR) can continue to do the same.