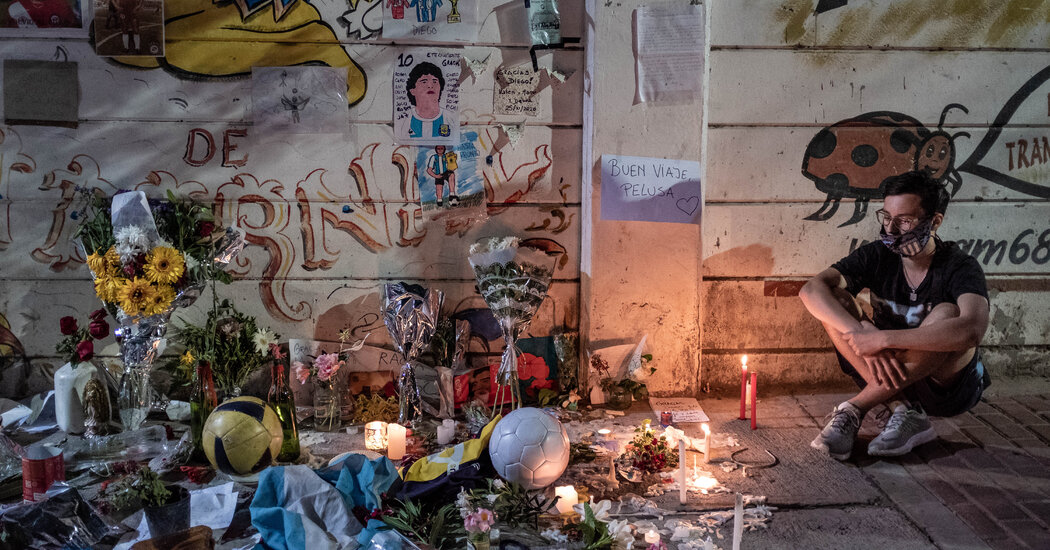 Diego Maradona’s wake knew no borders. Fans held a vigil in his name in Naples. His image lit up the Burj Khalifa in Dubai. The New Zealand rugby team laid a jersey in his honor on a field in Newcastle, Australia. His face adorned the front pages of newspapers across the world.

In Buenos Aires, though, the mourning felt personal. The Argentine capital was not just the city where he was born — in Villa Fiorito, one of its most deprived districts — and where he lay in state, at the city’s presidential palace, after his death last week.

And it was to Buenos Aires that he returned — as a player, as a coach and always, at Boca, as a fan — again and again once his playing career had faded, once his star had fallen. Buenos Aires can feel like a city built around soccer. After the death of the player who defined that culture more than any other, then, it should be no surprise that it was to soccer that porteños turned in their grief.

“I didn’t have the chance to see him play, but I watched all the videos, I am a fan of Boca Juniors, and he is the biggest thing there is, there is no comparison. We had him as an immortal.”

“The news hurt me a lot. It represents the rebel, the one who is not silent, the one who attacks the powerful. In Che’s line, for example, for those at the bottom and for me that is important.”

Carlos: “A boy who came out of poverty and was at the top surrounded by important people and the greats of this world.”

Maria: “They didn’t take care of him. Nobody took care of him, nobody saved him. And he was the most beautiful thing we had.”

“I heard about the death from my mom, and I couldn’t believe it, I thought it was fake news. I saw journalists who were broken by the news. He is a player who represents a lot to everyone. He made the name of Argentina known to everyone.”

“The closest I ever got to him was when I was a kid. I was in the stadium and he came to kick a corner, and I got him as close as I have you here. How can you not be excited about that? He gave joy to the country at a time when the country had no joy. Times when it was difficult to put a plate on the table, and he made you have an equal smile, to celebrate with your family. He is criticized for things, but as he said: ‘I wanted to be an example in soccer. If you want examples in life, look at your homes, not me.’”

“With the Maradonian Church, the best tributes to Diego, I did them in life. To speak well of him with the world, to take him to the top.”

“I played with and against Maradona, here in Fiorito. I met him when I was 5 or 6 years old. Luckily, when he was 15 years old, they took him out of the slum. When I found out, I locked myself in my room. I felt that I was not going to see him anymore. For the neighborhood he represents everything, the best.”

“I’ve known him since school because he was with my brother. I was a little older. He played with us when he was 15 years old. There were many good kids here and in many neighborhoods in the area. Many who could be worth millions at that time. I realize how proud I was to know him. I’m still a little bit on the moon. I can’t believe it yet. He represents Fiorito as a soccer player but he left when he was 15 years old and thanks to God and his efforts he never stepped on mud again.”

These interviews were edited and condensed.