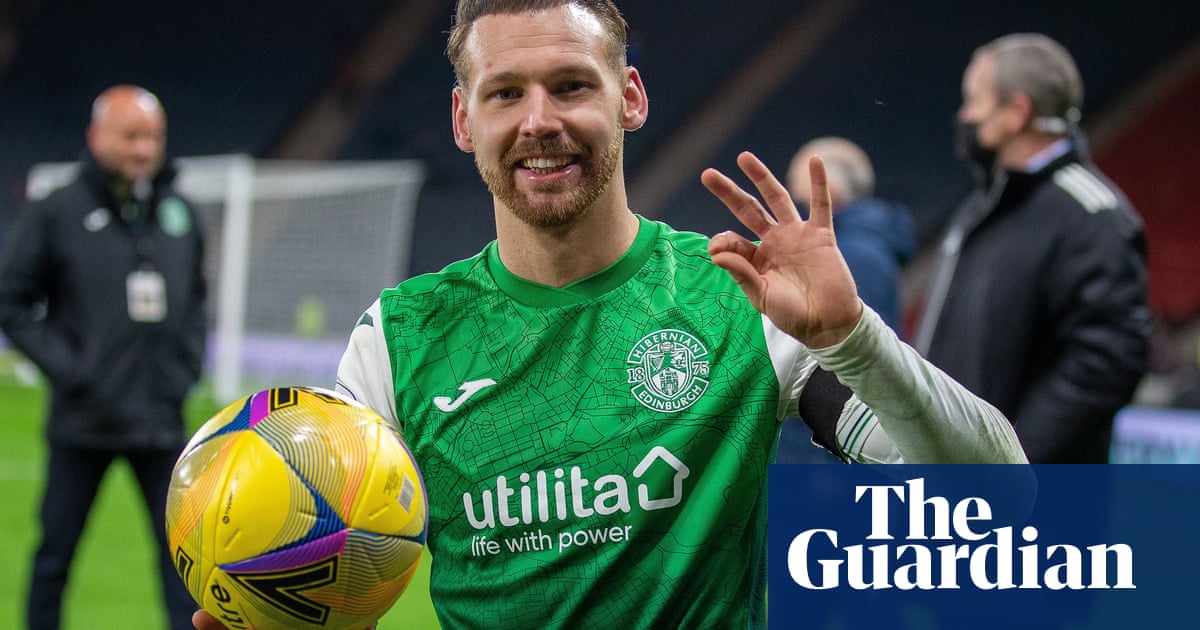 Martin Boyle was Hibernian’s hat-trick hero in the 3-1 humbling of Rangers which set up a Premier Sports Cup final with Celtic next month.

The new Rangers manager, Giovanni van Bronckhorst, watched from the Hampden Park main stand awaiting a work permit, as the Australia international scored three times in the first 38 minutes – the third from a penalty – before the midfielder Scott Arfield’s strike gave the flailing Ibrox side a lifeline.

However, Hibs remained resilient under pressure and Rangers, led by David McCallum and his assistant Brian Gilmour, helped by player-coach Jermain Defoe and goalkeeping coach Colin Stewart, ran out of ideas and time.

Van Bronckhorst will have been concerned by Rangers’ shambolic defending in the first half but Jack Ross’s side can look forward to taking on the other side of the Old Firm at the national stadium on 19 December.

It was quite a start as Paul Hanlon and the Hibs midfielder Joe Newell picked up bookings from Kevin Clancy for fouls on Joe Aribo.

Boyle then opened the scoring in the ninth minute when he knocked the ball past Allan McGregor from a yard after it appeared that the Rangers captain, James Tavernier, had tried to chest Newell’s corner back to his keeper and came up short.

In the 20th minute Hanlon’s timely tackle inside the box prevented Matt Macey from being tested by Aribo’s goal-bound shot. At the other end seconds later, there was no such blockade when Kevin Nisbet took a pass from Newell and played in Boyle who lashed the ball low past McGregor.

Arfield tested Macey with a long-range drive and then came close with a powerful effort on the turn, while in between Aribo fired over the bar on the angle.

Things got worse for Rangers in the 38th minute when the midfielder Steven Davis bumped Boyle inside the box. Clancy pointed to the spot and the forward hammered his penalty past McGregor to send the Hibs fans into raptures.

They were still celebrating when the Hibs defender Ryan Porteous kicked a clearance to Arfield, who curled the ball past Macey.

An inevitable surge at the start of the second half saw Porteous brilliantly block a drive from Glen Kamara and a series of crosses and corners into the penalty area followed. The Hibs defender Lewis Stevenson replaced Christian Doig before Fashion Sakala came on for Ryan Kent and got in a header from a Tavernier cross which caused some trouble.

Ianis Hagi and Ryan Jack took over from Arfield and Aribo in the 69th minute as the Ibrox side tried another route. In the 77th minute Jack’s deflected shot forced a corner from which Leon Balogun missed the target with a header and when the ball was recycled, fellow centre-back Connor Goldson headed into Macey’s arms.

In the 87th minute Goldson fired over from 10 yards after a corner and with that chance went any slim hopes of a comeback, leaving Hibs to celebrate and plenty of questions for Van Bronckhorst.