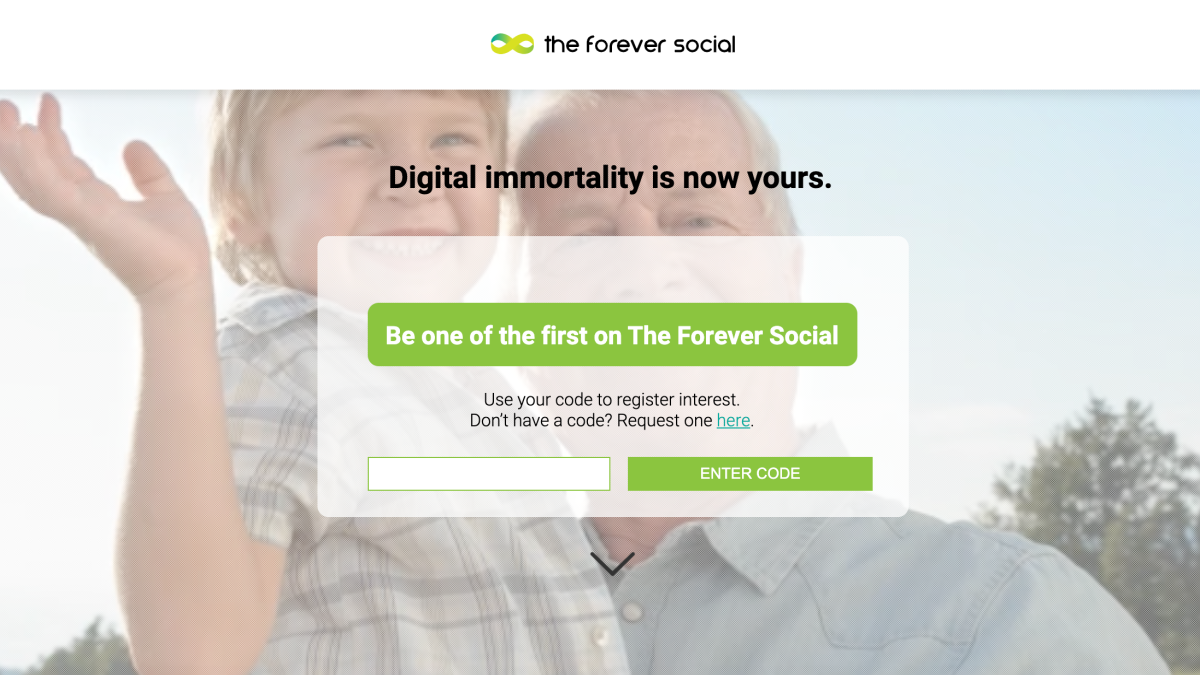 Our timeline transitioned into an episode of Black Mirror so gradually, we didn’t even notice (well, maybe some of us noticed). But the new reality will start getting harder to deny when companies just start straight up ripping off episodes of that darkly satirical, five-minutes-into-the-future Netflix series. Case in point: The Forever Social, a new service that promises to use advanced artificial intelligence to maintain your presence on social media after your death. (As if Twitter wasn’t already cursed enough.)

Oh, except The Forever Social is fake—a website created as viral promotion for a podcast called Forever Is Fallen. But it doesn’t necessarily look fake when you come across it on social media, as evidenced by the replies to this tweet yesterday from writer B.C. Wallin, which was retweeted nearly 700 times and received more than 1,000 likes:

My first thought was that it was a gag of some kind (well, no, my first thought was “what the actual fuck?”), mostly because of the listed promo code, FUBAR. But a google search turned up legit-looking a July press release touting the website TheForeverSocial.com (from which Wallin grabbed those screenshots), purportedly out of Sweden. While I still doubted any company could actually do what was being promised—maintain social media profiles for dead users across extant and not-yet-invented platforms? How does that work?—it did appear that someone was actually promising, at the very least, to do so. I dropped a link to the tweet in our editorial Slack and said it seemed too ridiculous and dystopian and 2020 not to write about.

But then I went back to the press release and googled a little more, and discovered that a search for the “company founder,” one Karl-Axel Mattiasson, turned up only results linked to the aforementioned podcast. Oh, of course. Though this endlessly exhausting year is doing its best to convince me anything can and will happen, this unsettling form of digital immortality seemed a bit beyond the pale.

The discovery process outlined above took me fewer than five minutes, but it also occurred to me that many of the people who came across the original tweet probably didn’t go much further than my initial “wtf?” reaction before they clicked retweet or replied and then went about their day. And though this is a minor—and relatively harmless—example, it’s yet more evidence of how social media can be used, whether intentionally or accidentally, to spread misleading news.

I don’t know exactly how many people were taken in by the non-hoax, but it’s worth noting that today, Aug. 14, the press release—which was distributed on a real newswire out of Australia—has been updated with a prompt asking readers to “check the website and Forever Is Fallen for more information.” It doesn’t explicitly break the third wall of the in-podcast universe, but it at least tips off less cautious readers that they need to do some investigating before they take its claims at face value.

And while it’s certainly worth taking steps to determine what will happen to your digital footprint after you die—an issue that came up this week too when the ghost of Herman Cain started tweeting about the Biden/Harris presidential ticket (and note that Cain’s still-verified Twitter profile has been modified to make it clear the tweets are now coming from his staff, and not the great beyond), there’s a larger takeaway: “Real” misleading news—from QAnon conspiracies to trumped-up studies and slick documentaries about the pandemic—don’t come with warnings or tip-offs that they are just pulling your leg. So before you boost them to your own friends, family and followers, make sure you are doing your due diligence.

Learn how to spot fake news on social media—and how to report it—and definitely don’t spread it yourself. This business with The Forever Social is a minor, benign and even slightly amusing example of why, online at least, we should follow the advice of one of the sci-fi series that helped set the stage for Black Mirror: Trust no one.