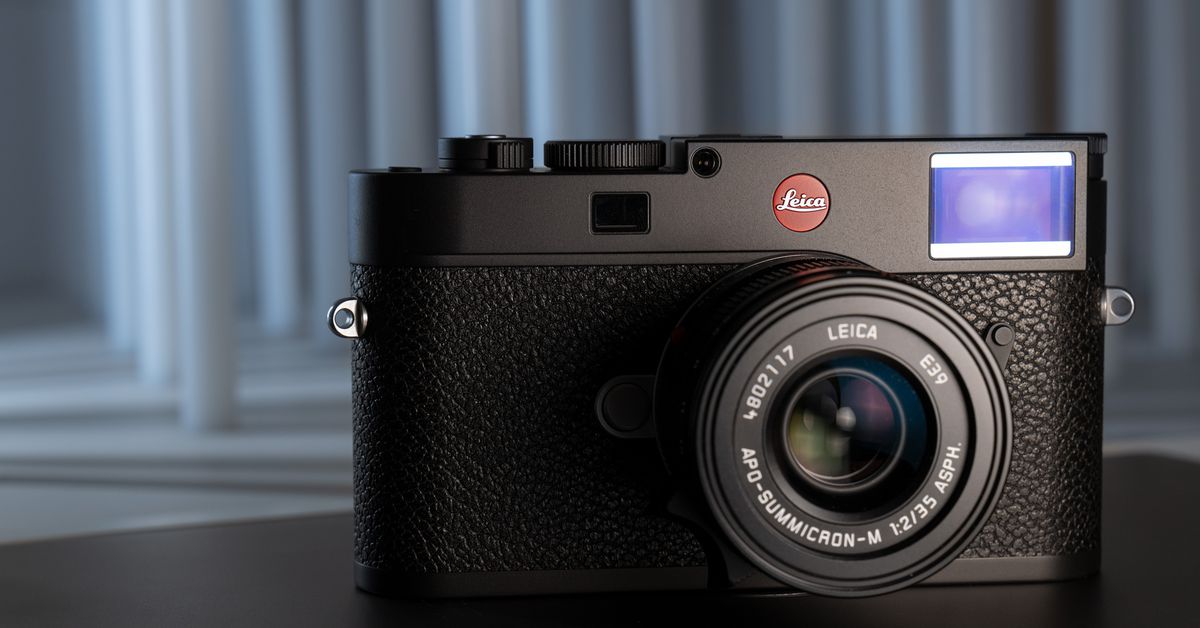 Leica has introduced the latest generation of its venerated M rangefinder camera, the new M11. The M11 is very similar in appearance to the M10 line it’s replacing, with much of the claimed 40 new improvements found on the inside. Leica says the M11 will be available starting today, January 13th, 2022, with a price tag of $8,995.

The most significant upgrade is a new, 60-megapixel backside-illuminated full-frame CMOS sensor that captures 14 stops of dynamic range at its full resolution. Uniquely, the M11 also allows photographers to capture RAW files at 36 or 18 megapixels, which unlocks another stop of dynamic range, provides better low light performance, and allows for longer burst shooting at the expense of zoomed-in detail. (The company says it is using pixel binning alongside a newly developed algorithm to create the lower resolutions, a similar technique used by many smartphone cameras.) File sizes range from 70 to 120MB for a 60-megapixel DNG RAW file; the 18-megapixel setting can reduce that down to as low as 20MB per image.

Along with the new sensor, Leica is using a new, ultra-thin UV filter on top of it, which the company claims provides more natural color reproduction. The company says the M11 captures the highest dynamic range of any digital M ever, including the black-and-white Monochrom models that were praised for their ability to capture a wide range of tones. The M11’s ISO range starts at 64 and goes up to 50,000.

On the outside, the main difference between the M11 and its predecessors is the lack of Leica’s signature bottom plate, which had to be removed to load film or swap memory cards and batteries on the old cameras. The M11 instead adopts the slick cartridge-style battery system from the Q2, and it’s much faster to swap batteries or memory cards as a result. Leica says the new battery is 64 percent larger than the M10’s and can last for up to 700 shots using live view on the rear display or 1,700 shots when using the rangefinder.

Alongside the new battery slot is a USB-C port that can be used for data transfer (either to a computer or to a phone — the M11 is actually Made For iPhone (MFi) certified for connecting to iOS and iPadOS devices) or charging. 64GB of storage is built into the camera, and you can choose to save images to it or an SD card in a variety of configurations.

Perhaps the most noticeable difference when using the M11 is how much lighter it is. Leica swapped the brass top plate for an aluminum one on the black model (the silver model retains the brass plate) and cut 20 percent or about 100 grams off its weight. It’s immediately noticeable and makes the black M11 easier to carry around and maneuver than prior M cameras, which were always heavier than most people would expect. Fortunately, Leica’s signature build quality is still here, and the M11 doesn’t feel any less durable than prior models. It likely won’t gain the same brassing or patina as the older models as it ages, however.

Despite the lighter weight, the M11 will feel immediately familiar to existing M-system photographers, and its overall shooting experience remains the same. Though the sensor is higher resolution, the processor inside is faster, and it has a couple of new tricks, such as the ability to use multi-field metering even when shooting with the rangefinder, the M11 is still a fully manual camera built for still photography. It does not shoot video of any sort, its burst rate caps out at 4.5 frames per second, and it requires manually focusing and exposing every shot, which makes it less than ideal for a lot of photography disciplines, such as sports (or keeping up with a fast-moving toddler). But those qualities are exactly the reason many Leica owners are willing to pay so much money to have one of these cameras, and it’s smart of Leica to not mess with the experience too much.

The M11 is the first in the new line of M-series cameras, and though the company is only announcing the one model today, it’ll likely be followed up with other variants in the future. If you are interested in picking one up and have the padding in your bank account to afford it, it is available for purchase through authorized Leica dealers starting today.