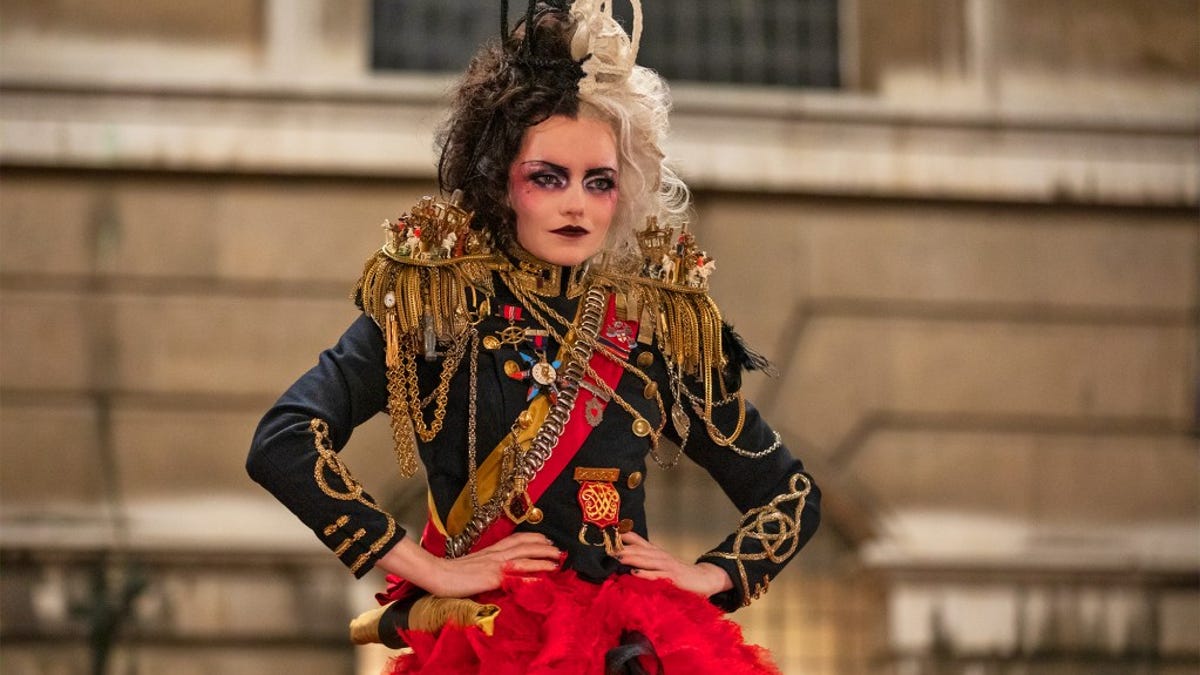 As a young child, Estella (Tipper Seifert-Cleveland) was a two-toned hair-colored rebel who was born to give authority figures a hard time. Her mother, Catherine (Emily Beecham), encourages Estella to fight the urge to call herself Cruella and blend in with society as much as possible.

When tragedy strikes, Estella is left on the streets to grow up as a professional pickpocket who desperately wants to be a fashion designer. As an adult, when Estella (Emma Stone) gets a chance encounter with wealthy fashion designer The Baroness (Emma Thompson), she learns more about her past and her talents than she ever intended to.

Is Cruella the future of Disney villain origin stories? I certainly hope not. It’s easy to tell the direction Disney wants to go which is producing grittier content that isn’t for small children. You don’t have to suck the color out of everything or add a two-hour runtime to do that, but it’s what Cruella is guilty of. Emma Stone dials the acting up to 11 to make sure she’s a believable Cruella De Vil. Her British accent is sometimes distracting, but overall the actress is fun to watch. However, the script by Dana Fox and Tony McNamara is the problem.

Cruella is so unfocused. The film ushers the audience from one plot point to the next to get to the big reveal without giving us anything to latch on to in the meantime. Imagine if the narrative followed one train of thought, then maybe the film wouldn’t be over two hours long. Cruella and the Baroness are the only characters that see any development, and the rest are forgettable props that fade into the background.

Should I feel sorry for Cruella De Vil? What’s the point of garnering sympathy when we know she turns out to be a hateful, sociopathic, animal abusing socialite? Disney wants to give us anti-villains, people we can root for despite how horrible they are. It makes me think they forget why fans like some of these villains in the first place. We love them because we hate them—they don’t need our empathy. I don’t care why this woman despises Dalmatians! This template is quickly becoming tiresome. Not just from Disney, but the villain origin movies in general. I’m over it.

What I did like about Cruella is the costume design by Jenny Beavan, the production design by Fiona Crombie, and the work of the makeup/art design departments. Stone wears Beavan’s Haute punk costumes with flair and pizazz. The scene where Cruella arrives at one of the Baroness’ parties with “the future” spray-painted on her face is a stroke of pure genius. And while the sets are dimly lit, they are gorgeously designed to capture the seedy dankness of 1960s London. The cars, buildings, the fashion—no detail is spared in ensuring maximum authenticity is achieved. It all meshes together so well, it all looks like an exhibition at the Metropolitan Museum of art.

Listen, a film doesn’t need pretty costumes to be enjoyable, but it does need good storytelling—and this is the missing ingredient in Disney’s Cruella.

For more, make sure you’re following us on our Instagram @io9dotcom.