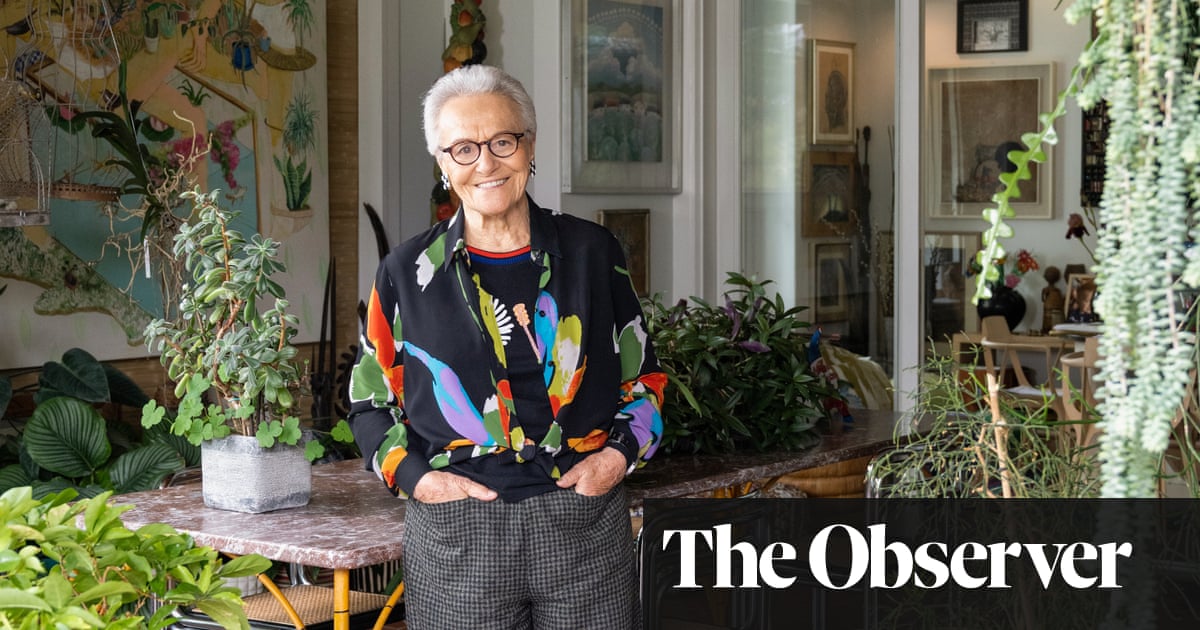 In Sumirago, a suburb of Varese in Lombardy, where the verdant surrounds sit in the shadow of the famously pastel-tinted Monte Rosa, Rosita Missoni is describing the scene outside her window. “It really is a beautiful day, the sky is a bright blue and the mountain is white,” she says. “It’s why we came here originally, because of this fabulous view – and why my husband insisted on big windows everywhere.”

Situated 25 miles northwest of Milan, the area is the spiritual home of Missoni, the Italian fashion house famous for its joyful zig-zag knits. Rosita established Missoni with her late husband Ottavio in 1953, and it grew into one of Italy’s most recognisable and celebrated exports.

Finding a tranquil spot like this, where they could nurture their business and their young family away from the urban bustle, was the most important priority for the couple.

“Generally at the time, everyone was going nearer to Milan and big cities, but we wanted to have nature around us,” Rosita explains. “It was 1970 and things were going very well for us at the time and so we decided to build our own factory. My husband started asking around to see if there were places where we could get some nice space and when I came here, I was totally in love with what he had found. My husband and I had a very optimistic view of life in that moment, we were very happy and this became the place of our lives.”

A joyous sense of celebration permeates Rosita’s house. ‘My home is my nest,’ she says

If there is one word to describe the Missoni aesthetic and dynasty, it would be optimism. Aside from the jubilant colour palettes and invigorating prints for which it is famed, the family’s close-knit bond and zest for life is legendary. If they’re not travelling the world together, they are hosting candlelit fashion-week parties for hundreds of guests and publishing family cookbooks to share their favourite recipes.

Fifty years on from building their forever home, the magnetism of the mountain town has kept Rosita’s family close by. Her children, Angela and Luca – who both held senior roles at the fashion brand until last year – along with their children and grandchildren all live within 10 minutes’ drive and pop in regularly to share meals. “This is an open house!” she laughs. “Everybody is welcome here.”

This sense of celebration permeates Rosita’s home, which is like her three-dimensional autobiography, or a family photo album come to life, each corner featuring a memento, a sculpture, a book or a trinket that transports her back to a specific time and place. “My home is my nest,” she says.

A large open-plan space, white walls and terracotta floors act as canvases for Missoni Home textiles, for which 90-year-old Rosita continues to serve as creative director. There are hundreds of treasures on display: Rosita says there are no rules as to what makes it in here, “I just have to like it.” Many of the huge pieces of art were collected by the couple as gifts to one another before Ottavio died in 2013.

Rosita points to a large 1953 picture, entitled Composition, by the Italian painter Tancredi, in her living room, which she bought her husband for his 80th birthday. “It reminded me of his fabric patterns and colour swatches,” she says. In her bedroom, illustrations by Sonia Delaunay, which she has collected over the years, fill the walls, while a huge floral oil-painting by the French artist Jacques Henri Lartigue, better known for his photography, hangs above her bed. “That’s something I bought in Paris. It was quite expensive, but at that time I decided I could offer myself this painting,” she explains.

Elsewhere, in her snug, where she enjoys her life-long passion of watching sports – she and her husband met at the 1948 London Olympics where he was competing in the 400m hurdles – huge family portraits sit above a sumptuous sofa covered in her signature Missoni Home Neuss pattern. The same fabric is used on all her seating.

Does she think the ongoing popularity of her homewares line is a result of it being so feelgood and happy? “Exactly, that’s it,” she says.

A flea-market addict – something she delights in having passed down to her daughter and granddaughters – Rosita can regularly be found seeking out objects wherever she may be to satisfy her appetite for a curiosity to bring home. “I never know what’s going to come into my life. It could be a table, a piece of fabric. I walk quite quickly, but when something catches my eye…”

The cabinet of ceramics by Susie Cooper and Clarice Cliff in her living room is the culmination of one of her oldest thrifting collections. “I started collecting these when they were quite inexpensive, from markets in London,” she says. “At the time I didn’t have money to spend, but I was an early collector. I went for inspiration for my work and my home and these were very inspiring.”

The collector in Rosita shows no sign of slowing down. When we speak, she has just returned home from a trip to Egypt with daughter Angela where, after a cruise on the Nile, the pair swept up souvenirs. “Our luggage was so overweight because I came back with so much,” she says. “I have to decide where I want them around, but I want everything on display.”

The warmth and personality of her home, says Rosita, is all in the mix. “I love things that remind me of trips,” she says, still smiling. “I have had the privilege of living a long life and I take great pleasure in sharing our home.”