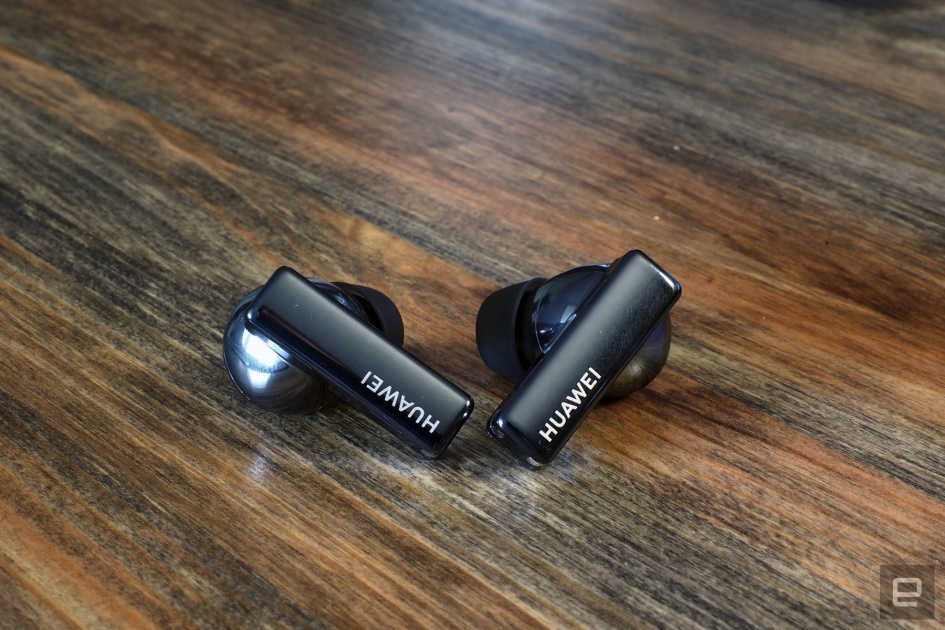 The shape puts more of the weight closer to your ears, mitigating the annoyances of the open fit earbud from last year. I prefer them as close to the inside of my ears as possible, so I don’t have to worry about them sliding out when I’m on the go. The squat design also seems to help anchor them and I never had to worry about them moving, even when thrashing my head around.

The FreeBuds Pro also ship with small, medium and large tips to help ensure they fit all types of ears. In addition, the companion app — which at the time of publication we were unable to try — will be able to tell you which will improve your fit.

There is a visible sensor on the outward-facing side of both buds that you’ll use to control playback and volume. As usual, taps pause playback and swipes alter the volume, while a good pinch — much like the AirPods Pro — cycles through the active noise cancellation options. One pinch activates active noise cancellation (ANC), while a second switches you to “awareness” mode, letting certain sounds, like voices, bleed through to help you stay tuned to your surroundings.

Huawei has said that the FreeBuds Pro’s ANC can now drown out up to 40dB of ambient sound (up from 15dB on the open-designed 3), and I can attest to that. Over a big family dinner, I asked everyone to have a loud and animated conversation in front of me. And, to my surprise, it managed to dull the chat well below the point of it being distracting.

One thing that hasn’t changed from the FreeBuds 3 is the internals, which are still using Huawei’s Kirin A1 chip. The company has, however, managed to get the total battery life up to 30 hours before you need to head to a charger. And you’ll get four and a half hours of listening out of each bud with ANC enabled, and closer to seven with ANC disabled. Thankfully, a full recharge takes just 40 minutes inside the case (and the case itself only needs an hour, anyway).

The FreeBuds Pro will cost €199 ($236) when they launch in October in all of the markets Huawei is able to sell in.

At the same time, Huawei is also unveiling the Watch GT2 Pro, its latest flagship smartwatch with a sapphire glass case and titanium body. Available in two body types — classic and sport — it’ll pack 100 different workout modes including support for golf and snow sports. You’ll also get weather alerts and a GPS breadcrumb trail should you get lost in the wilderness.

Huawei is also using this moment to remind everyone about the Watch Fit, which it announced a week ago outside of Europe. This device, too, has plenty of similarities with the Honor Watch ES which was announced on September 4th. The focus here, with the stretched Apple Watch-style screen, is on fitness and live coaching, with 44 animated demonstrations.

The Watch GT2 Pro is launching in September, with the sport model priced at €329, while the classic version will set you back €349. The Watch Fit, on the other hand, is priced at €129, and all three devices are available in the very near future.