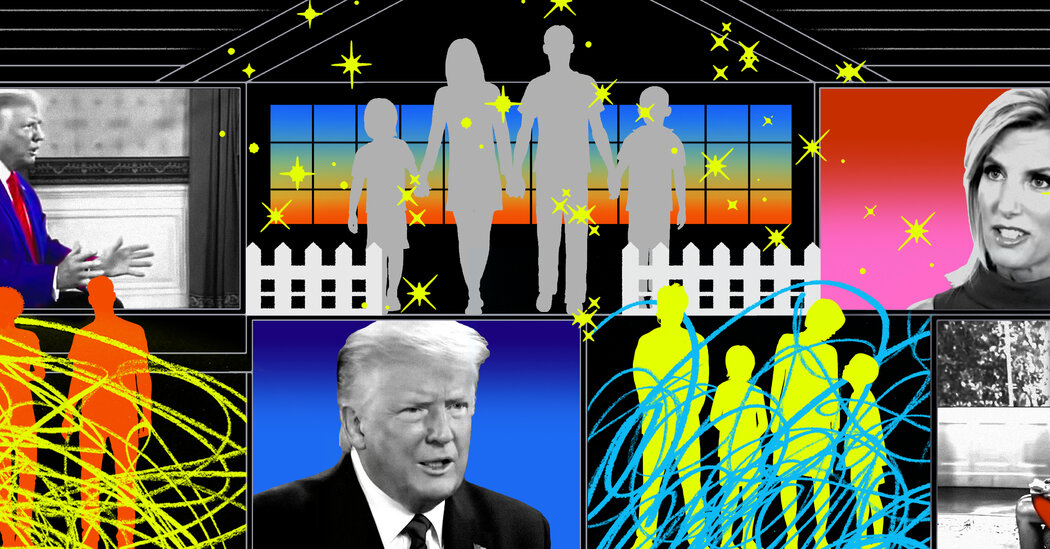 On the last day of August, the Fox News host Laura Ingraham interviewed President Trump on her show, “The Ingraham Angle.” Five weeks earlier, Trump endured a half-hour interview with the Axios political reporter Jonathan Swan, who grilled Trump about Covid-19 with the kind of disdain economics professors reserve for a graduate student who botches the calculation. Ingraham was the anti-Swan, fawning and pat. Leaning forward in her chair with a warm expression, she tossed softballs and gently guided the president back on track when he veered into politically risky territory.

“They were trying to destroy the suburban, beautiful — the American dream, really,” the president said of Democrats. “They want low-income housing, and with that comes a lot of other problems, including crime. May not be nice to say it, but I’ll say it.”

Ingraham cut in, asking, “You’re not saying all poor people are criminals, though?”

“No,” Trump responded. “I’m not saying that at all, but it does — there is a level of violence that you don’t see.”

The media cycle tends to react more to what Trump says than what he does. But in this case, the president was talking about a tangible accomplishment — if you are inclined to call it that. In July, his administration repealed the Affirmatively Furthering Fair Housing regulation that was issued by the Obama administration in 2015, the first significant federal intervention aimed at expanding housing opportunity since the Civil Rights Act of 1968. That major piece of legislation, broadly known as the Fair Housing Act, formally ended legal segregation, but it followed the all-too-​familiar pattern of expanding opportunity more on paper than in practice. Racial segregation in housing proved hard to police and easy to uphold, through discrimination in lending and real estate practices as well as through race-neutral guises, like zoning laws that made it illegal to build affordable housing. The new Affirmatively Furthering Fair Housing rule was designed to nudge housing opportunity forward by requiring municipalities seeking federal grants to develop plans to overcome barriers to racial and economic integration.

Trump has been selling his administration’s rollback of this fair-housing initiative as a way to protect the American suburb. As Trump wrote on Twitter in July: “I am happy to inform all of the people living their Suburban Lifestyle Dream that you will no longer be bothered or financially hurt by having low income housing built in your neighborhood. Your housing prices will go up based on the market, and crime will go down.” On “The Ingraham Angle,” Trump mentioned Westchester County in New York, a rich, white community that built 750 units of affordable housing and marketed them to Black and Latino families, as mandated by a 2009 legal settlement of a discrimination case. “Westchester was ground zero — OK? — for what they were trying to do,” Trump told Ingraham. A viewer might have fairly assumed that property values cratered and crime soared in Westchester after those 750 affordable housing units were built — except neither of those things happened. Today Westchester’s property values are higher than they were in 2009, and crime there has fallen.

Westchester is no anomaly. The data show that subsidized-housing developments don’t soak property values or drive up crime. In fact, some studies have found that affordable-housing projects make neighborhoods safer and at times even lift property values. When an affordable rental-housing complex was first proposed for the township of Mount Laurel, N.J., in 1997 — again, as a result of a court order that revealed exclusionary practices — there was much rending of garments among the residents of the affluent Philadelphia suburb. But as the sociology professor Douglas Massey and his co-authors documented in their 2013 book, “Climbing Mount Laurel,” the controversy was essentially forgotten after a decade, with a third of nearby residents not even aware that the Ethel R. Lawrence Homes existed. The researchers found that the complex had no impact on crime, property values or tax burdens — but it did make a lasting and profound difference in the lives of its low-income residents, raising their incomes, providing their children better educations and improving their mental health. Gutting the Affirmatively Furthering Fair Housing rule doesn’t help the suburbs. All it does is harm those denied opportunities by racist policies and practices.

Politicians and pundits were quick to say that Trump’s rhetoric constituted race-baiting. “America is tired of Trump’s racism,” Senator Tim Kaine of Virginia wrote on Twitter. But Trump’s shameless bigotry provides comfort and cover to white people of all political stripes, releasing both his white supporters and his white detractors from their own racial guilt. His base thrills at having a president who talks the way they talk — who says, “May not be nice to say it, but … ” — while white liberals can deplore Trump’s racism even as they ignore their own. The problem with Michelle Obama’s “when they go low, we go high” formula is that when they go so low, like uphold-racial-discrimination-and-brag-about-it-on-Twitter low, liberals do not have to go very high to feel morally superior. A boogeyman running the free world allows a much deeper rot within themselves to remain unexamined.

In a famous study first conducted in Detroit in 1976, researchers showed white and Black adults diagrams that displayed a space labeled “Your House,” surrounded by 14 houses representing their neighbors. One diagram showed a neighborhood with one house colored in, signaling that it was occupied by a Black family; another diagram showed an integrated neighborhood where half the residents were white and half were Black. Most Black respondents said that their ideal neighborhood was the integrated one — half Black, half white — but most whites said they would try to move out of such a neighborhood. When the study was replicated in 2004, only 35 percent of white people said they were willing to move into the integrated neighborhood. Today white people remain the most segregated racial group in America. Those aren’t just MAGA towns and conservative retirement villages. In the last presidential election, Westchester County and Burlington County (which encompasses Mount Laurel township) — those staunch defenders of racial segregation — went for Hillary Clinton by wide margins.

It must be acknowledged when the president blasphemes the American creed by denying opportunity to those who need and deserve it. Did we expect anything less from a man viewed by the majority of Americans as the least ethical president in recent memory? Trump is who we thought he was. But the more probing question when it comes to dismantling structural racism is: Who are we? Until white liberals strive to expand opportunity for all families and stop hoarding it for themselves — until they let go of the fantasy that inequality can be addressed without sharing — their denouncements of Trump’s race-baiting will ring hollow. A new occupant in the White House is not needed to “affirmatively further fair housing” in the suburbs and beyond. Progressive communities can take action now. Their consistent failure to do so raises the question of whether they really believe in expanding opportunity and promoting racial justice — or whether it’s all just talk and tweets.