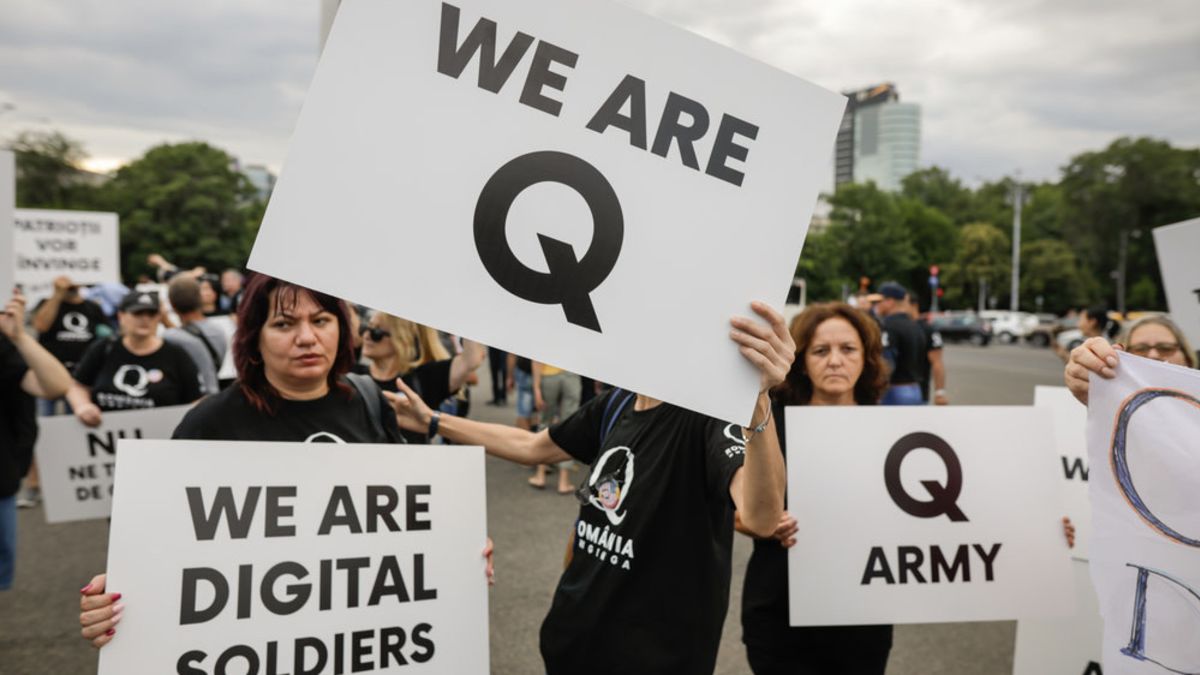 We all have opinions and beliefs that others may find strange, but sometimes these ideas balloon into dangerous movements like QAnon.

QAnon began in 2017 with a mysterious poster known as “Q” writing in-depth conspiratorial posts on a certain anonymous message board that tends to be the epicenter for all online absurdity. This “Q” claims that Donald Trump is waging a covert holy war against the US government’s “deep state,” which is lead by a cult of Satan-worshipping democrats, media moguls, Hollywood elites, and silicon valley executives. This cult apparently oversees a vast child sex-trafficking ring and engages in cannibalism, genetic manipulation, and human sacrifice.

Oh, and John F. Kennedy Jr. is apparently alive and is expected to be confirmed as President Trump’s running mate (in place of Vice President Mike Pence) any day now. “Q” apparently knows all this because they’re a time traveler with the highest level of government security clearance, by the way.

Despite how insane this sounds, the theory quickly spiraled into mainstream social media platforms. The movement has members across the world, and droves of QAnon supporters now regularly appear at Pro-Trump rallies. Many politicians profess a belief in QAnon, and President Trump has spoken positively about the movement and even retweeted QAnon-related content. There’s even a QAnon PAC. This isn’t just a fringe movement anymore, and it’s much weirder (and more dangerous) than your average conspiracy theory.

How to spot QAnon online

QAnon actively evolves to hide in plain sight and spread its message, but there are still recognizable signs and slogans associate with the movement.

Followers call themselves “anons,” “digital soldiers,” and the “Q Army,” and their motto is, “Where We Go One, We Go All,” often abbreviated as “WWG1WGA.” They also use phrases like “The Storm” or “the Great Awakening” to describe the spread of their ideas and Trump’s eventual victory over the “deep state.”

These are obvious symbols of the movement, but there are more subtle cues to look out for as well. The group often hides behind hashtags and phrases related to child abuse and sex trafficking. The recent uproar from conservative groups over the Netflix movie Cuties is influenced in part by QAnon’s ideas.

Then there are far-right publications like Info Wars and Breitbart who routinely post QAnon-adjacent theories and dog-whistles, even if they don’t cite the conspiracy directly.

No one likes a snitch, but QAnon is not just some kooky conspiracy group; it’s a dangerous movement. Members often advocate extremist action, and several real-world shootings and kidnappings were motivated by QAnon and related conspiracies like Pizzagate. The FBI says QAnon is a public threat, and there’s even a bipartisan effort to quell QAnon’s cultural influence.

If you notice someone sharing QAnon theories that are getting a bit too extremist for your tastes, feel free to report their post and their accounts. The process is the same for reporting other abusive or harmful content, and we’ve linked to each platform’s support page in case you need a helping hand:

While everyone has the right to say whatever they want—silly as it might be—consider this a digital intervention of sorts that just might very well save your holiday dinner if you have family members that buy into QAnon theories. Otherwise, good luck; let us know if you need backup.