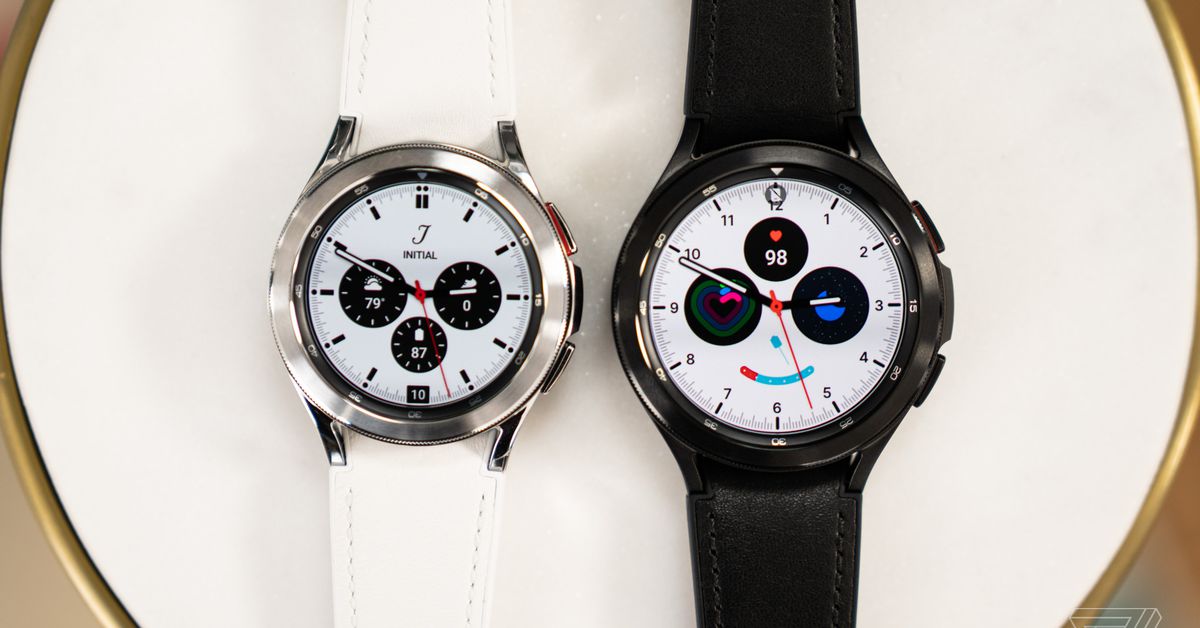 Samsung Galaxy Watch 4 and Watch 4 Classic: how to preorder – The VergeSkip to main content

The new smartwatches are the first to don Wear OS 3

As expected, Samsung took the wraps off the Galaxy Watch 4 and the aptly titled Galaxy Watch 4 Classic during its Galaxy Unpacked event this morning, confirming recent leaks and introducing the first two devices built on Google and Samsung’s co-developed smartwatch platform, Wear OS 3. Both watches also sport Samsung’s new Exynos W920 processor, 1.5GB of RAM, 16GB of storage, and come with a host of health-related features thanks to the inclusion of Samsung’s 3-in-1 BioActive sensor.

Although neither model is set to arrive until August 27th, both are available for preorder starting today at varying price points.

How to preorder the Galaxy Watch 4

The Galaxy Watch 4 is essentially the next iteration of the Galaxy Watch Active 2. The aluminum smartwatch will be available in either a 40mm or 44mm configuration and will showcase two side buttons in addition to a digital bezel. It will also launch in a handful of colors — specifically black, green, silver, and pink — with additional personalization coming in the form of watch bands.

If you’re looking to secure Samsung’s forthcoming wearable ahead of launch, both sizes are currently available for preorder at Samsung. Pricing starts at $249 (or $299 with LTE) for the 40mm model, and if you preorder the Galaxy Watch 4 between now and August 26th, Samsung will throw in a $50 credit to be used toward Samsung select devices, add-ons, and accessories. The larger, 44mm variant costs $279.99 with Bluetooth and Wi-Fi, while the LTE version is $329.99. If you trade in an eligible device like the Samsung Galaxy Watch 3, you can also save up to $185 on the total cost.

The Galaxy Watch 4 features Samsung’s One UI Watch, a digital bezel, and comes in one of two sizes: 40mm or 44mm. It’s also smaller than the like-minded Galaxy Watch 4 Classic and is best thought of as the successor to the Galaxy Watch Active 2.

If you prefer to go through your carrier, Verizon is offering the Galaxy Watch 4 as low as $12.49 a month. You can also save up to $100 off if you trade in an eligible device, or $150 if you purchase the forthcoming smartwatch alongside an Android phone.

Lastly, AT&T is offering preorders on both the 40mm and 44mm models. You can preorder the 40mm configuration for $299.99, or the 44mm model for $329.99, and AT&T will knock up to $200 off if you trade in an eligible device. Financing is also available for $8.34 and $9.17 a month, respectively, and you can get a second Galaxy Watch 4 when you purchase both on a qualifying installment plan and add a new data line.

How to preorder the Galaxy Watch 4 Classic

Unlike the Samsung Galaxy Watch 4, the Classic represents a more traditional take on a smartwatch, albeit with Wear OS 3 inside. The compact watch will launch with a stainless steel build and the same AMOLED display as the Galaxy Watch 4, however, it also features a bezel you have to physically rotate. It will be available in 42mm and 46mm versions and in one of two colors (black or silver).

On the preorder front, both sizes of the Galaxy Watch 4 Classic are now available from Samsung. Pricing starts at $349.99 (or $399.99 with LTE), and Samsung will throw in a $50 credit if you preorder the watch prior to its launch on August 27th, which you can use on select Samsung devices and accessories. The bigger, 46mm model with Bluetooth and Wi-Fi retails for $379.99, while the LTE-equipped variant runs $429.99. Like with the Galaxy Watch 4, Samsung will also take up to $185 off the total cost with an eligible trade-in.

The Galaxy Watch 4 Classic is larger than the standard Galaxy Watch 4 and showcases a more traditional stainless steel design. It also sports a physical bezel as opposed to a digital one.

If you’d like to preorder the Galaxy Watch 4 Classic via your carrier, you have a few different options. The 42mm Galaxy Watch 4 is currently available at Verizon outright for $399, or for $16.66 a month. The 46mm model, on the other hand, will cost you $429 outright or $17.91 a month on an installment plan. AT&T will also give you a $100 credit if you trade in an eligible device, or it’ll take $150 off if you purchase the smartwatch with an Android phone.

T-Mobile offers the same pricing as Verizon, though you can also get a second Galaxy Watch 4 Classic of equal or lesser value for free if you opt for an additional line and purchase both devices on an installment plan. As for pricing, you can preorder the 42mm and 46mm models for $399.99 and $429.99, respectively, or opt for an installment plan starting at $17.92 a month.

If you’re on AT&T, you can preorder both the 42mm and 46mm models for $399.99 and $429.99, respectively. You can also finance the 42mm model for $11.11 a month or the 46mm model for $11.95 a month; you can even get a second Galaxy Watch 4 Classic for free when you opt for an additional data plan and purchase both on a qualifying installment plan. Like Samsung, the carrier will also take up to $200 off with an eligible trade-in.

The Samsung Galaxy Z Fold 3 and Flip 3: all the rumors, news, and announcements