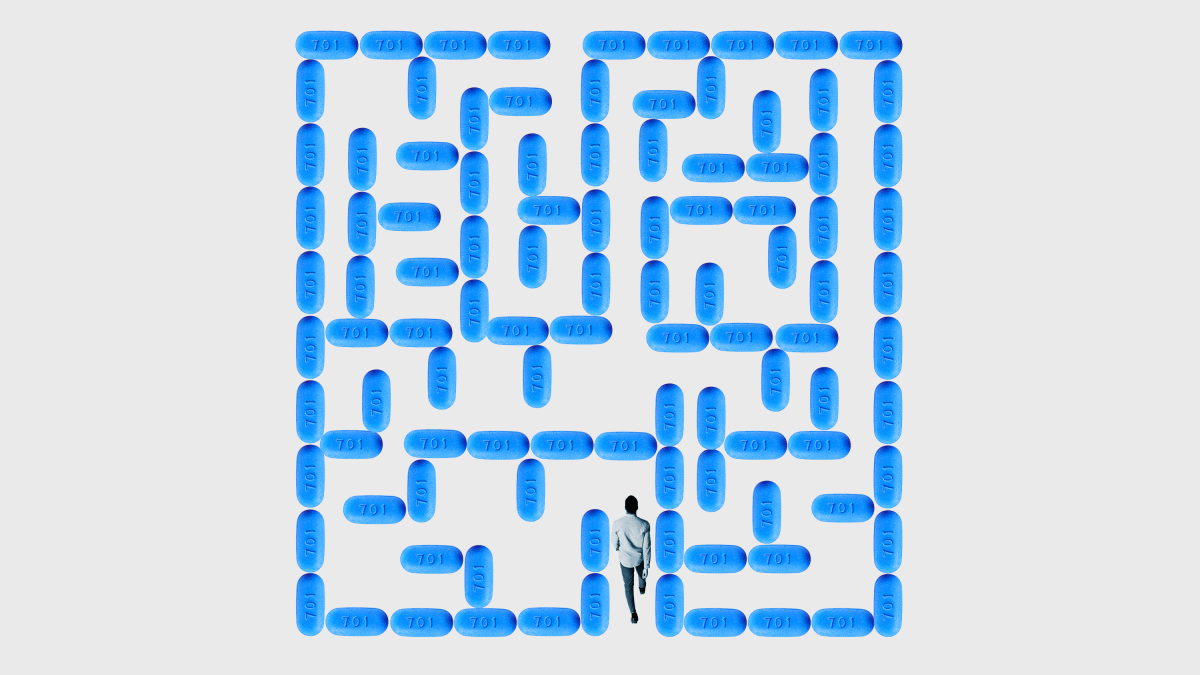 It’s unfair and frankly stupid that we have to worry about other illnesses while a pandemic rages its way through our country. But life goes on, and so do all the other things that threaten it—including HIV. It’s not always easy to access the medication that prevents HIV transmission, but if you know a few tricks, it can be done.

In other words, Truvada and Descovy are miracle drugs (although it’s still unproven that Descovy can protect people assigned female at birth during vaginal intercourse). In a country with a crap health care system where more than a million people are living with HIV—with over 36,000 new cases reported in 2018—they’re the next best thing to a vaccine.

“PrEP is highly effective at preventing HIV from sex or injection drug use when taken consistently,” said CDC medical officer Dr. Nathan Furukawa, who authored a study indicating that many people who should take PrEP don’t because of concerns about the cost. “If enough people at risk of HIV take PrEP, we can stop new HIV infections and end the HIV epidemic.”

But because of capitalism generally and Gilead Sciences, Inc.—the company that owns the controversial Truvada patent—specifically, PrEP has a $2,000 monthly price tag, even though stopping the spread of deadly viruses happens to be a priority in a lot of other places.

The good news is that even though PrEP is normally very expensive, there are currently loopholes that allow most people to pay next to nothing for their prescription. So if you’re a sexually active non-millionaire in America who wants to protect themself from HIV/AIDS, how do you get your hands on PrEP?

First of all, do you need PrEP?

PrEP is for people who are HIV negative, weigh at least 77 pounds, and are at risk of getting HIV. People considered “at risk” of getting HIV are:

While not specifically included on PrEP websites I found, there are other risk factors for HIV transmission, including race—Black, Latinx, and Indigenous people are disproportionately affected by HIV—age, class, and location, to consider. Unless sites are targeted toward trans health care, discussions of our HIV risk factors are also not included. It’s unclear whether trans women are considered separate from “gay and bi men.”

How do I get PrEP?

First, you have to get a prescription for Truvada or Descovy from your healthcare provider. I got my Truvada prescription through my local Planned Parenthood last year, where I explained that I was sexually active with more than one partner. My queer-affirming doctor (a rare creature, indeed) was happy to prescribe it for me.

The hard part was actually filling my prescription. Even though I was insured, my insurance company would only cover a percentage of the co-pay, which meant I had to use the Gilead Advancing Access program, which offers a coupon that covers what insurance won’t. With the coupon, I ended up paying something like $15 a month for my daily pill. I had to sign up for the coupon and get a card, which was an inconvenience, but nothing major.

Those not lucky enough to have insurance can also use the Gilead Advancing Access program, which can bring the costs for Truvada and Descovy down to $0.

What if I need more help?

Even if you know how to get around the cost, a lot of people could still use additional resources getting and staying on PrEP. Part of this is because some people don’t know that it’s available, or that someone like them might need it. A recent Gallup survey found that only half of trans people, and only 35% of trans women, were aware of PrEP. There are organizations that provide PrEP education and support access, like PleasePrEPME.org, for those who may face more obstacles to getting the medication.

Then there are companies like Nurx, a health startup that streamlines the process for people seeking sexual health medications, including PrEP. Like Capsule or ZocDoc, companies like Nurx are middlemen created to meet the needs of people exhausted by navigating the system on their own—for a fee, of course.

The future of PrEP

The power struggle between Gilead and the federal government over control of PrEP’s patents rages on, even after the Trump White House announced it would distribute free PrEP to those who aren’t insured—a program that will be bankrolled by taxpayers who are, incidentally, the same people who bankrolled the development of PrEP in the first place.

Until the day comes that health care is free and on-demand for everyone, we’re going to continue to have to struggle for access to drugs like PrEP. Gotta love capitalism.