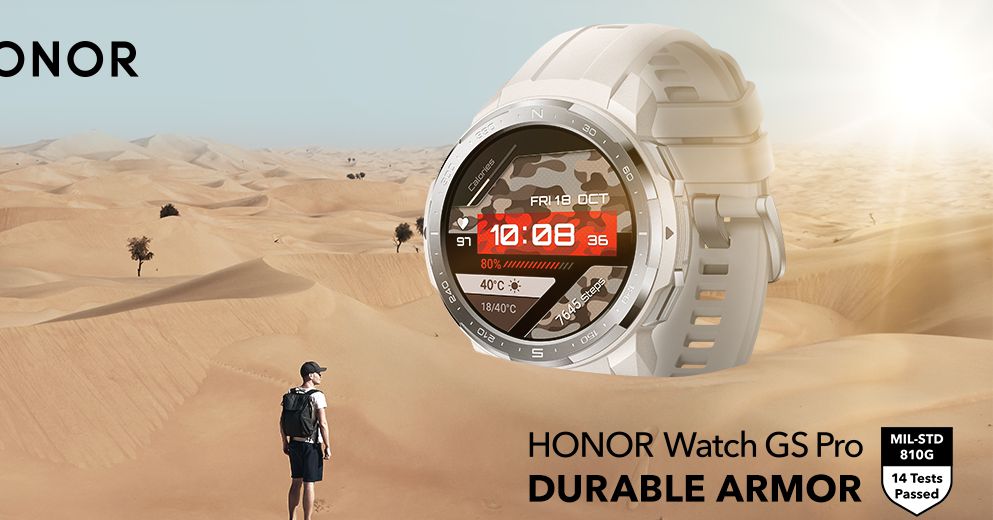 Huawei sub-brand Honor has announced its first rugged smartwatch, the Watch GS Pro, at this year’s scaled-back IFA trade show in Berlin. Alongside the new Watch GS Pro is a new fashion-focused smartwatch called the Watch ES. The Pad 6 and Pad X6 Android tablets are also getting released outside of China, as is a trio of Honor laptops featuring AMD’s latest generation of Ryzen processors.

If you’re looking for an idea of how rugged the Watch GS Pro is meant to be, then Honor claims it meets as many as 14 of the US military’s MIL-STD-810G procurement standards. These include testing it to withstand high temperatures, low temperatures, rain, humidity, and low pressures at altitude. For an idea of why you’d need a smartwatch that rugged, Honor’s list of its 100-plus supported workout modes gives you some idea. It includes a new skiing mode, which tracks your exercise on the slopes as well as other high-octane activities like mountain climbing, swimming, and cycling.

The smartwatch, which is powered by Huawei’s LiteOS operating system, has a heart rate monitor, and it supports blood oxygen tracking, sleep tracking, and even stress monitoring, according to Honor. Other features include weather alerts, support for both GPS and GLONASS satellite positioning systems, and a “route back” mode that Honor says can track your journey and use it to guide you back along your original path. However, there’s no maps support, nor is there any support for third-party apps like Strava.

In terms of specs, you’re getting a 1.39-inch OLED display with a resolution of 454 x 454, and the smartwatch is powered by a Kirin A1 chipset. Battery life goes up to a maximum of 25 days, but run it in outdoor workout mode, and that drops to 100 hours or just 48 hours with GPS enabled. The watch comes in black, white, and blue and will be available starting September 7th in the UK, France, Germany, Italy, and Spain for €249.99.

Its more stylish counterpart, the Honor Watch ES, isn’t quite as rugged, and its battery life only goes up to a maximum of 10 days. However, it’s lighter and still supports a range of 95 workout modes, including six that Honor says it can automatically detect. It’s got a 1.64-inch rectangular OLED display with a resolution of 456 x 280, and it can track your heart rate, blood oxygen levels, sleep, stress, and, where appropriate, menstrual cycles. It will be available from September 7th in the UK and Germany for €99.99. It will be available in more European markets later in the month.

Announced back in July for the Chinese market, Honor has now announced that its range of Ryzen 4000-powered laptops is getting a global release. The MagicBook 14 and 15 are both powered by Ryzen 5 4500U CPUs paired with 8 or 16GB of RAM and 256 or 512GB of NVME storage. The big difference is their displays, which measure 14 and 15.6 inches respectively.

Finally, Honor has also announced a pair of tablets, the Honor Pad 6 and the Pad X6, which it announced for the Chinese market back in July. They feature 10.1 and 9.7-inch displays, respectively. Both are powered by Huawei’s Kirin 710A and have 5-megapixel cameras on their rear and 2-megapixel selfie cameras. The Honor Pad X6 comes with 3GB of RAM and 32GB of storage, while the Pad 6 has an additional 4GB / 64GB option. Both tablets run Android 10, but given Huawei’s ongoing presence on the US entity list, it will not ship with Google’s apps or services. Pricing and release date information have yet to be announced.

Update September 4th, 6:17AM ET: Updated with pricing and availability information for the MagicBook 15.