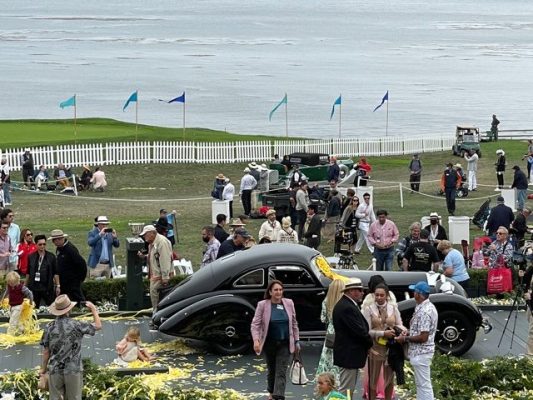 Monterey Car Week wrapped up on Sunday with the return of the Pebble Beach Concours d’Elegance. A black 1938 Mercedes-Benz 540K Autobahn Kurrier took top honors at the show, now in its 70th year, held on the golf course overlooking the Pacific Ocean. But it was the electric hypercars and high-performance hybrids, not the historics that stood out this year.

Over the years, the glitz and glam of Pebble Beach has ballooned into a week of activities around racing, displaying, parading and selling cars throughout the picturesque Monterey Peninsula. Last year, car week was canceled. This year, despite ongoing concerns about the spread of the novel coronavirus, the Champagne was flowing.

When the New York Auto Show was canceled earlier in the month due to concerns over the presence of the delta variant, there was speculation that Pebble would also be canceled. But it snuck through as the de facto show that must go on before the uncertainty of the fall season amid pandemic shutdowns. 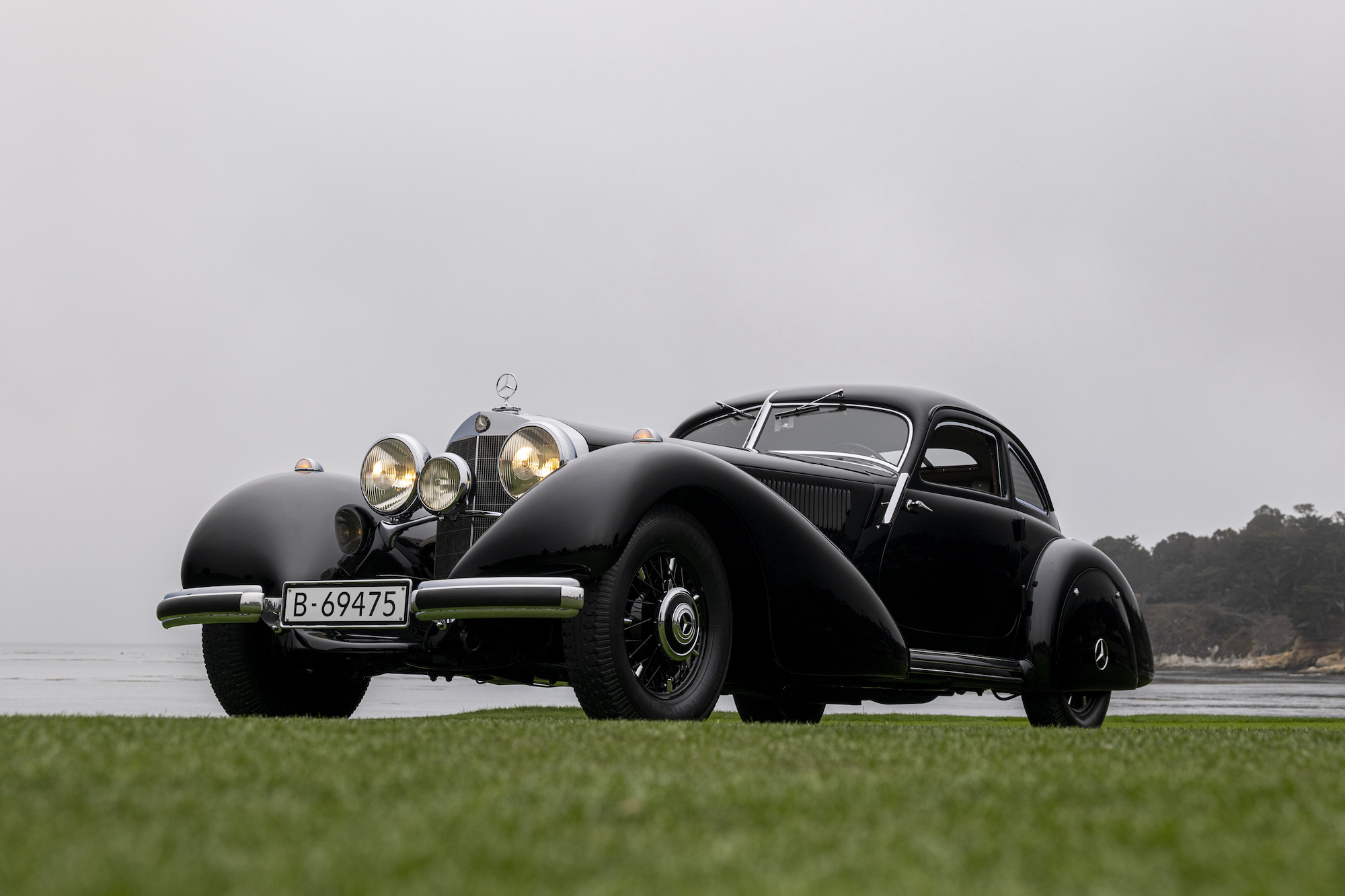 On the days leading up to the Concours, the streets of Carmel and Monterey were quieter and less busy, and there seemed to be fewer old cars driving around. There were plenty of modern Lamborghinis, Bentleys and Ferraris revving their engines in parking lots. Many guests slipped masks on and off at gatherings, which were mostly held outside, despite misty rain and cool temperatures. By Sunday, the crowds were back in full force for the Concours, which seemed as packed as ever.

The main event, the Pebble Beach Concours d’Elegance, was once dedicated to restored pre-war classic cars. But as generations and tastes shifted, newer cars were featured on the green. The attendees also seemed younger; high-performance sports cars dominated the scene.

A 1995 McLaren F1 was auctioned for a record-breaking $20 million at the Gooding & Company auction on Friday night. Meanwhile, automakers hurriedly pulled together splashy car launches of their limited edition high-dollar supercars for the media and their top customers who milled about at private events.

“Pebble Beach is an important pillar,” said Lamborghini CTO Maurizio Reggiani. “Pebble Beach told us what people love in terms of the aesthetic of the car.”

Most notably, Audi showed the futuristic Skysphere concept on Wednesday. Mercedes-Benz previewed a new California-style convertible SL on Friday, which won’t be officially revealed until September. Aston Martin showed its Valkyrie and Valhalla models on a generous stand overlooking the golf course at Pebble Beach, but only allowed media and serious, vetted customers a close look at its models.

Both Rimac Automobili and Lucid Group showed up at Pebble Beach to connect with potential customers that can afford to invest in the most pricy electric powertrains. Rimac used the podium to debut its blistering fast Nevera sports car. Monterey 2021 seemed to have shifted to where new cars and new player overtook the old on the periphery.

After a year of pent-up demand for super luxury cars, it was the perfect setting for showing off all of those pandemic purchases on the race track and roads in and around Monterey and Carmel. As auction prices soared and seven-figure sports car sold out, it became clear that performance car enthusiasm hasn’t waned. The new cars shown at Pebble Beach share much in common: All are pricey, packed with sports car technology and manufactured in low volumes. Here are some of the highlights. 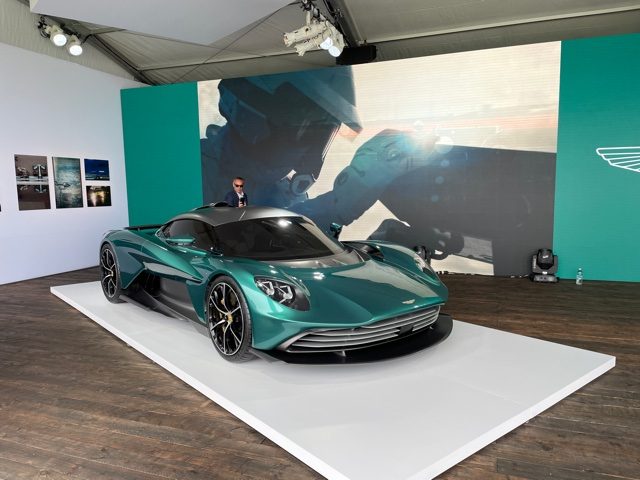 After several delays in recent years, the Aston Martin Valkyrie Spider was unveiled as a sold-out car by new CEO Tobias Moers. The Valkyrie has removable roof panels and a top speed of 217 miles per hour. Moers, who took the role over the pandemic, has been making drastic changes to the way Aston produces its cars.

Moers said that adding new in-car technology is essential to the brand’s future, and will pivot away from using last generation Mercedes-Benz tech. Also on display at the Aston stand was the 2024 Valhalla, which will have a hybrid powertrain. 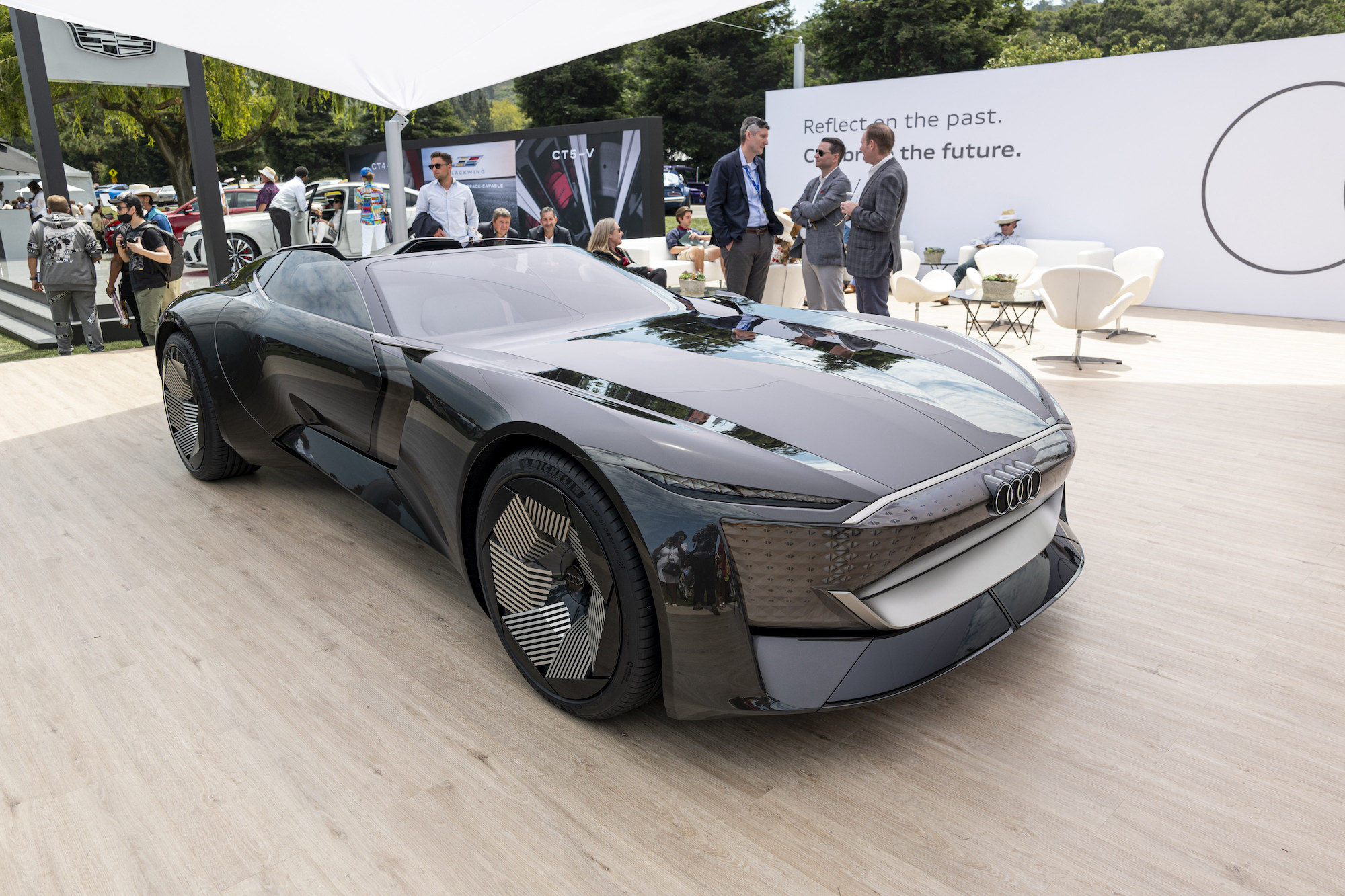 The self-driving Skysphere concept looked more like it belonged at the CES show than a vintage car concours. It stuck out as the most interesting car unveiled at Pebble Beach. Audi says it can slim down its wheelbase from a larger car into a small roadster. 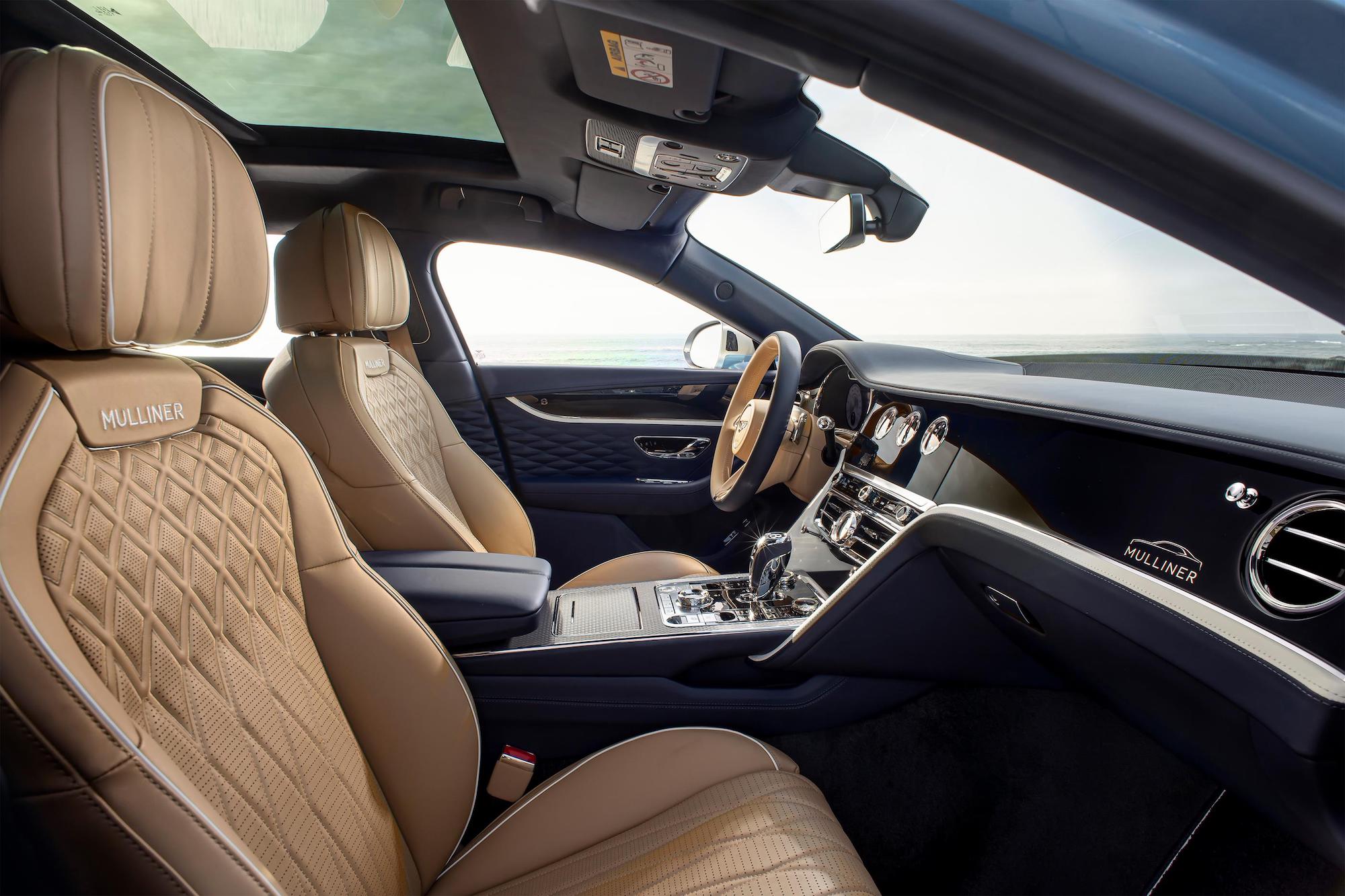 While the luxe interior of the Bentley Flying Spur Mulliner drew compliments for its lush leather, news that would include a hybrid powertrain is significant for Bentley. 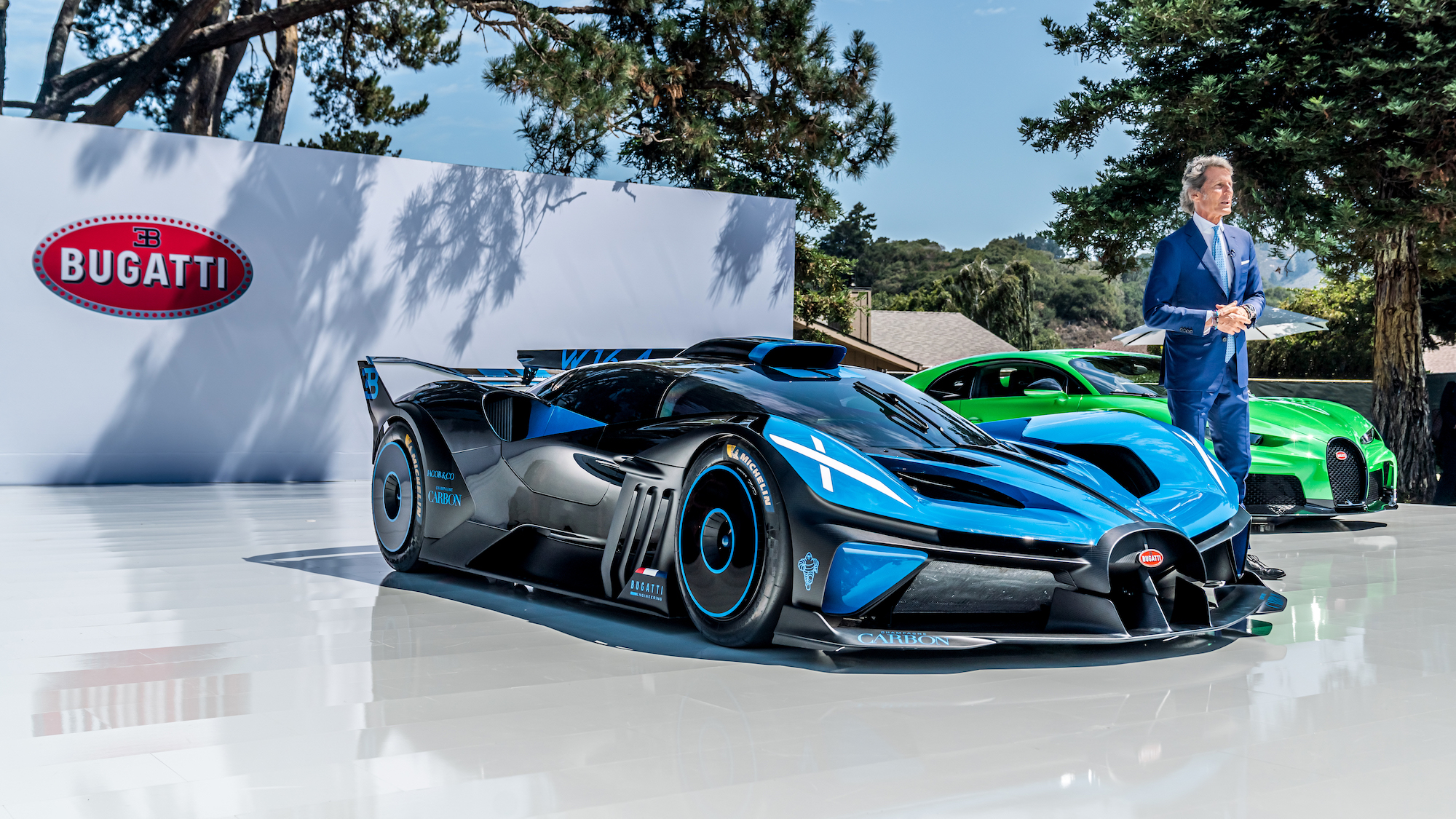 Image Credit: Bugatti. Stephan Winkelmann, president of Bugatti Automobiles, stands next to the Bugatti Bolide at The Quail, A Motorsports Gathering, in 2021.

The Bolide wasn’t at Pebble, but announced at a press conference held at The Quail on Friday. For the ultra-exclusive automaker, a new car is a big deal, especially one that will be its last gasoline-powered car. Bugatti says it will make 40 Bolides priced at $4 million apiece. It will have a top speed of 300 miles per hour. 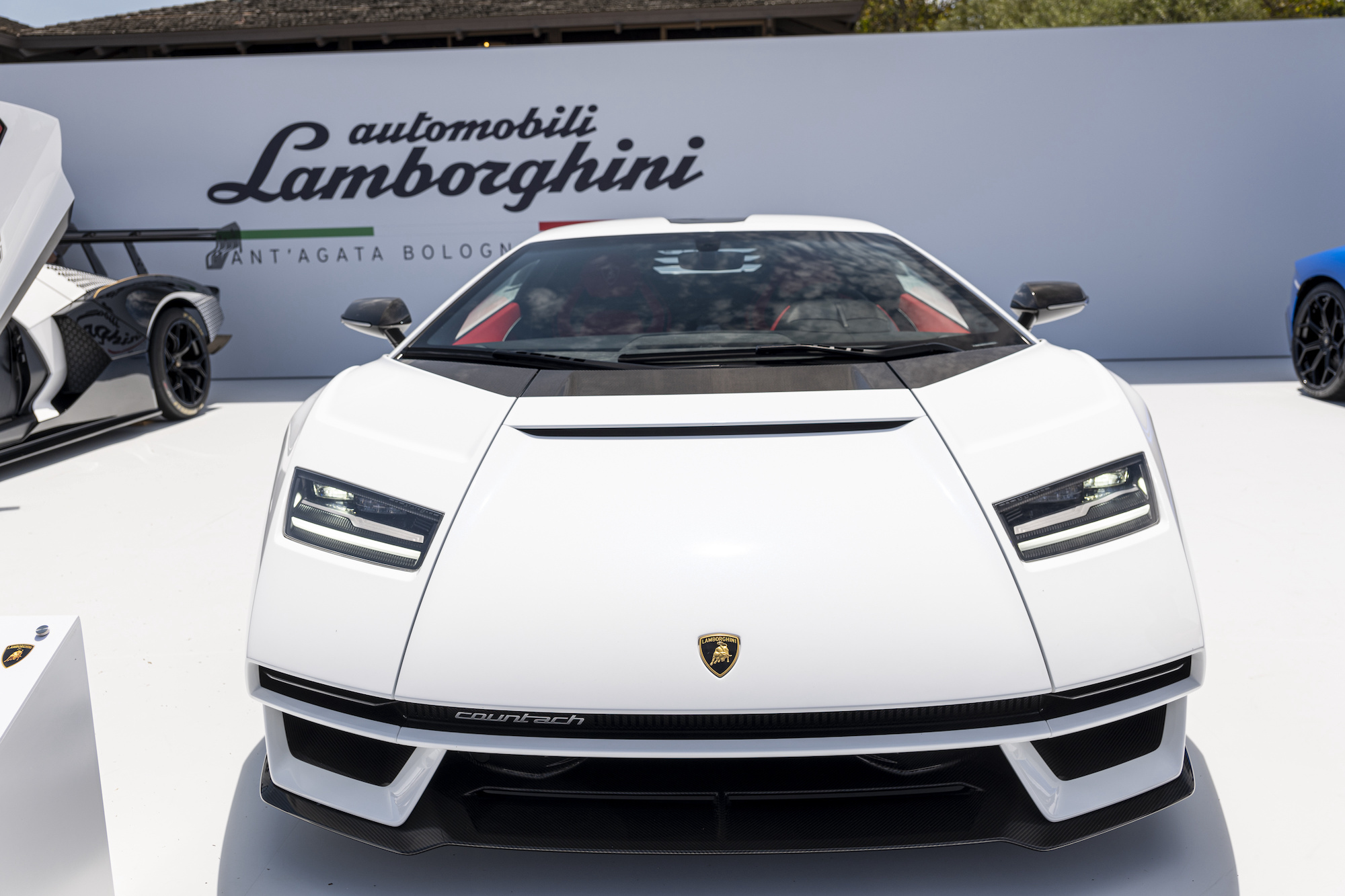 The Countach paid homage to the iconic model 50 years after the marque debuted. Under the hood, it’s an all-new car with a hybrid powertrain capable of reaching 60 miles per hour in 2.8 seconds. 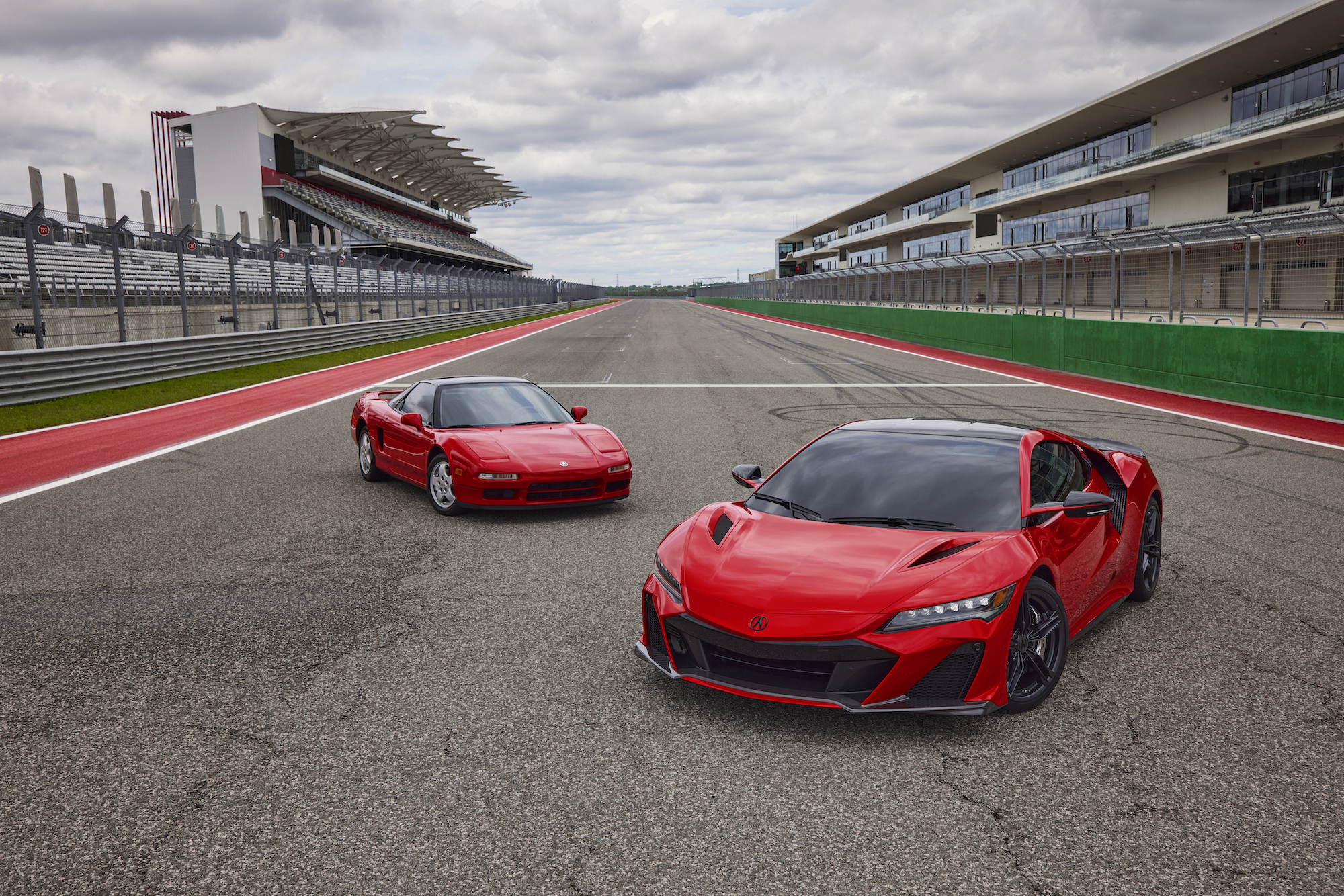 Acura introduced a high-end hybrid version of its super car, the NSX, an outgoing variant of the model that will soon cease to exist. It plans to manufacture only 350 cars and price the car starting at roughly $171,000. 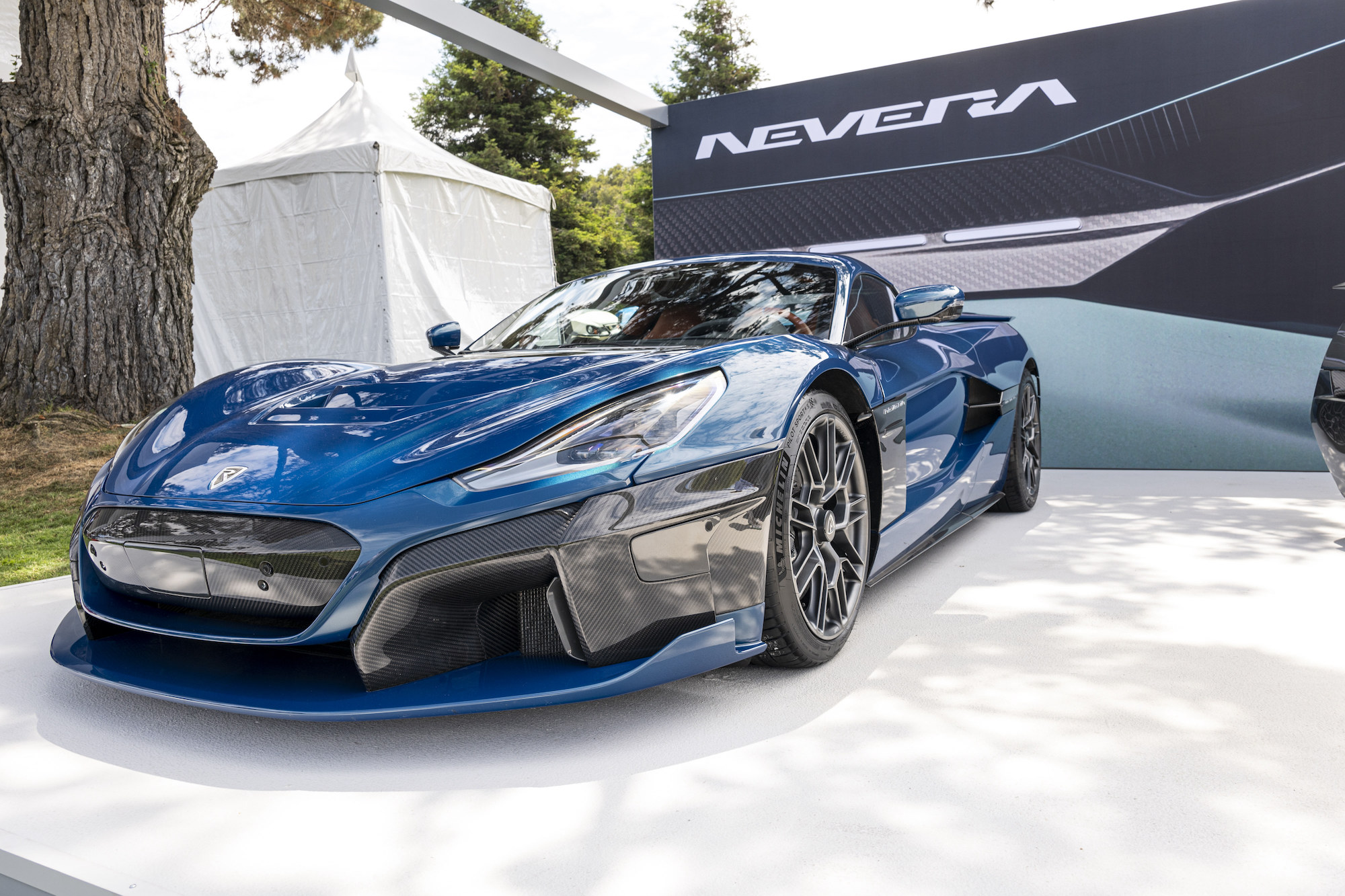 Rimac stamped its mark on Monterey with its U.S. debut of the Nevera, a $2.44 million electric super car. Rimac says Nevera will run up to 400 miles on full charge, at a top speed of 258 miles per hour. Rimac’s buzzy presence around town is a reminder that while Pebble Beach was once about the past, there’s a hunger for new EV players that can outrun the competition.