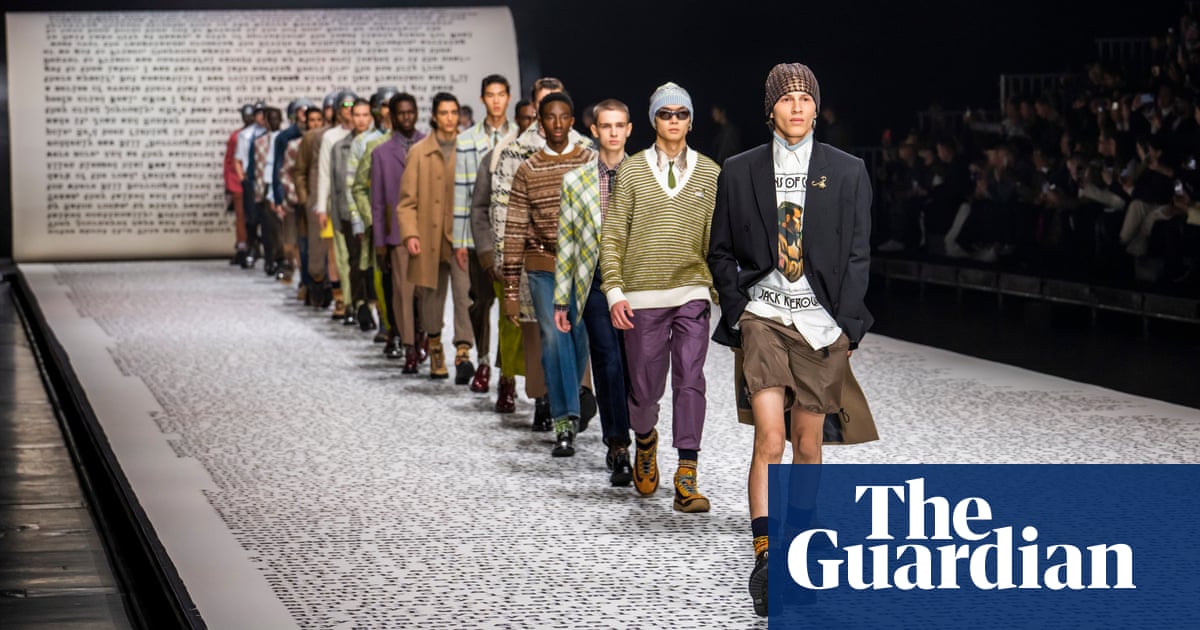 On the Road, Jack Kerouac’s seminal novel of the Beat generation, “sold a trillion Levi’s, [and] a million espresso coffee machines”, as the writer’s friend and fellow poet William Burroughs once wrote.

Now one of the coolest books in the literary canon is in the fashion spotlight as the inspiration for a Dior menswear collection unveiled at a blockbuster London catwalk show.

The British creative director of Dior menswear, Kim Jones, is a collector of rare books and literary memorabilia. His library of Beat editions and artefacts includes Kerouac’s mother’s copy of On the Road; books inscribed by Burroughs to the artist David Hockney; letters between the group, and even the poet Allen Ginsberg’s credit card.

“American sportswear is to me the basis of the modern men’s wardrobe,” said Jones at a preview of the show. “I wanted the collection to feel a little bit like a suitcase you might take on a road trip.” Luxe logo-emblazoned bags, however, were surely inspired by what keeps Dior profits ticking over, rather than what a Beat poet would have taken on the road.

The dive into history was a departure for Jones, winner of designer of the year at last week’s Fashion Awards, who has energised high-end menswear by opening it up to the influence of “hypebeast” streetwear. He collaborated with Nike to create the sellout Air Dior sneakers, and with Supreme during his previous role at Louis Vuitton. However, Jones believes that Beat literature has as visceral a connection to youth culture as sneakers and streetwear do. “Models have been coming in for fittings [for this show] and often they have read the book – and they can actually quote passages from it because they’ve read it much more recently than me. I read it in my late teens, like you do.”

Kerouac was a contemporary of Christian Dior, who burst on to the Paris fashion scene after the second world war. Although published in 1957, the first draft of On the Road was written six years earlier, “very much the same time that Christian Dior was changing things”, Jones said. “There is a synergy between two different ways of approaching how you change the world.”

In 2021, he sees the anti-establishment spirit of Kerouac as chiming with how young people are questioning the identities and allegiances of their parents’ generation. “The moment when a counterculture becomes the culture, I find that so interesting,” said Jones. “That’s why I love Bloomsbury too.”

The show was Jones’s first in London since 2003. “It’s a homecoming – unfortunately, at a very weird time,” he said. A selection of his personal library was displayed in a temporary exhibition staged for the night of the show, “because we have a lot of students coming from Saint Martins and I thought it would be nice for them to see how you come up with the idea for a collection”.

Jim Sampas, Kerouac’s nephew and the literary executor of his estate, consulted with Jones on the project. Sampas predicts a revival of interest around next year’s centenary of Kerouac’s birth. Speaking to Women’s Wear Daily this week, Sampas said of the show: “I’m anticipating designs that draw from mid-century aesthetics [and] channel the energy and adventurousness of Kerouac’s prose, with a modern twist appealing to a 2022 audience.”