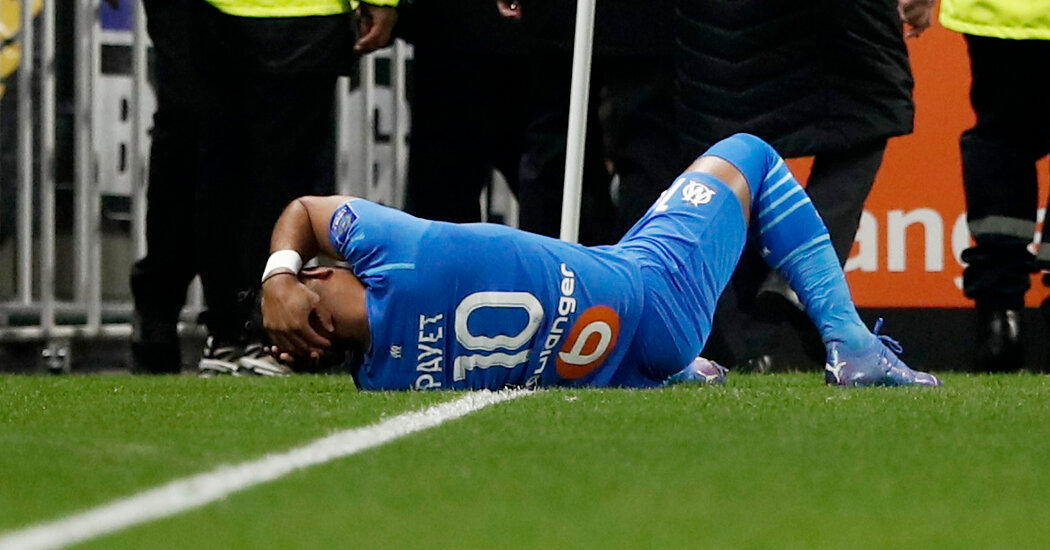 Only 3 minutes 54 seconds into the match, Dimitri Payet jogged gingerly toward the corner flag at Groupama Stadium. The game between his team, Marseille, and the host, Lyon, was young and still formless. There had been no goals. There had barely been time for a chance. Everybody, fans and players alike, was still settling in.

In the stands above him, Wilfried Serriere, 32, a food delivery driver, looked down and saw a half-liter bottle of water at his feet. It was full. Payet was placing the ball for a corner. His back was turned. In images captured by the stadium’s security cameras and later played in a courtroom, Serriere can be seen picking up the bottle, lowering his hood, and throwing it.

A beat later, Payet fell to the grass, clutching his face. The bottle had caught him flush on the cheek.

Payet’s teammates rushed to his aid. Anthony Lopes, Lyon’s goalkeeper, gestured at his own fans, pleading for calm. Later, Serriere told a court that he did “not know what went on in my head: euphoria, I don’t know.” He accepted he had thrown the bottle that struck Payet, but he could not explain why.

The rest of France has spent the opening months of the soccer season asking itself the same question. A wave of violence has washed over Ligue 1, the country’s top division, since fans returned to its stadiums in August after a yearlong absence caused by the coronavirus pandemic.

Two games, both involving Marseille, have been suspended — and eventually postponed — after Payet was struck by an object thrown from the stands. In Lyon, the players were taken off the field quickly. In the previous incident, at Nice, there was an angry confrontation on the field between Marseille’s players and hundreds of opposition fans. That confrontation also had consequences: A Nice fan was given a 12-month suspended sentence for kicking Payet, and a Marseille coach was barred for the rest of the season for punching a field invader.

Those, though, were only the two most high-profile incidents. Fans have invaded the field during games at Lens and Angers. There have been pitched battles between rival groups of ultras before and after games in several cities. Missiles have been thrown at Montpellier and Metz and the Parc des Princes, home of Paris St.-Germain.

In all, nine games in Ligue 1 have been afflicted this season by what the newspaper Dauphiné Libéré has described as an “epidemic” of violence, one so rampant that France’s soccer authorities have come to regard it as an existential threat. Vincent Labrune, the president of the French league, has called it nothing less than “a question of survival for our sport.”

If that sounds hyperbolic, it is at least rooted in realism. There is a fear the violence could have financial ramifications; Roxana Maracineanu, the country’s sports minister, has said French soccer cannot “collectively afford” to fail to deliver the content the league’s broadcasters have paid for. But there is also concern that it could make France an inhospitable place for players to work, too.

At Serriere’s sentencing, Axel Daurat, a lawyer representing Payet and Marseille, testified that the player had suffered “significant” psychological impact as a result of being attacked twice in three months. “The fear will be there every time he puts the ball down for a corner,” Daurat said.

But while the potential consequences are clear, there has been less progress on the causes. Labrune has suggested that the increase in disorder is best read as a reflection of the state of post-pandemic French society: “Anxious, worried, fractured, argumentative and — I have to say — a little crazy.”

And yet that explanation does not quite withstand scrutiny. France is hardly alone in feeling a certain civic fractiousness as it emerges, haltingly and uncertainly, into an uncomfortable new reality. Most of Europe’s other major leagues, greeting that same reality, have not seen anything like the upsurge in violence Ligue 1 has faced.

“It feels a little bit like cod psychology to say that it is to do with a tension in society manifesting in the stadium,” said Ronan Evain, the executive director of Football Supporters Europe. More likely, he said, is that the violence illustrates a structural, institutional failing.

“It is like the clubs have lost a little bit of expertise,” he said. “In the incident between Lens and Lille, there was no buffer zone between the home and away fans. I have not seen that at a game in 20 years, maybe more. The clubs put a lot of emphasis on the Covid protocols for returning to the stadiums. Perhaps there was not enough focus on security.”

Evain argued that may be connected to the loss of experienced stewards and security staff members during the pandemic, and he drew a parallel between the French experience and the scenes at Wembley Stadium in London in July, when thousands of ticketless fans stormed the gates when England played Italy in the Euro 2020 final. A sharply critical report this month documented how policing failures had left stadium security employees in an impossible — and potentially deadly — situation that day. “You cannot ask someone who is underpaid, undertrained and in poor working conditions to risk their health to stop someone going on the field,” Evain said.

Nicolas Hourcade, a sociologist at the École Centrale de Lyon who specializes in fan movements, suggested that lack of expertise has been compounded by the financial difficulties faced by French teams. France, alone among Europe’s major leagues, chose not to conclude its pandemic-interrupted 2019-20 season, and its teams are still reeling from the subsequent collapse of the league’s broadcast deal.

“It is possible the clubs did not invest enough in security,” he said, “which would explain why the measures were sometimes insufficient.”

But while that provides a possible explanation for why French soccer has provided such fertile ground for the violence, it does not offer insight into the root of it. Maracineanu, the sports minister, has laid blame at the door of France’s ultra groups, urging their leaders to “control your troops.” But it is not quite so simple.

At Serriere’s hearing, it emerged that he had been a Lyon fan for 15 years — though news reports noted he attended court in a Bayern Munich jersey — but was not a member of any organized group. He was not, in other words, an ultra.

“There have been incidents involving ultra groups,” said Pierre Barthélemy, a lawyer who has acted on behalf of the ultra movement. He cited two, specifically, including the field invasion at Lens, which he said had been triggered by the presence of “Belgian hooligans” among the visiting Lille fans, and an incident at a game in Montpellier that the ultras were boycotting.

“When the game was suspended at Nice, it was because the authorities had let people throw missiles on the field for 40 or 50 minutes,” Barthélemy said. “These are not organized incidents. They are spontaneous, and most are not coming from the ultras.”

That, however, only makes them harder to police. France has some of the most draconian punishments for crowd disorder in Europe, Evain said, including the ability to close grandstands or even entire stadiums.

He fears the current outbreak will be met by a “populist” response: increased calls for monitoring of fans in stadiums, and the greeting of any incident, even an individual action, with a collective punishment. At least one club owner has confided privately that he would agree to play behind closed doors if the issues continued.

But perhaps more significant, the atomized nature of the incidents in France makes them harder to understand. “Violence caused by ultras and incidents caused by other fans are not related,” said Hourcade, the sociologist.

Violence may be an organizational failure, he said. Or perhaps long-running grievances between ultra groups are resurfacing after lying dormant during the pandemic.

But threading through it all is the sense that the stadium has become a place where lines can be crossed and taboos broken, and 3:54 into a game, when the trill of the whistle has barely faded and the game has barely begun, a fan can look at a bottle and, without ever knowing why, pick it up and hurl it at a player, and land another blow on the image French soccer presents to the world.