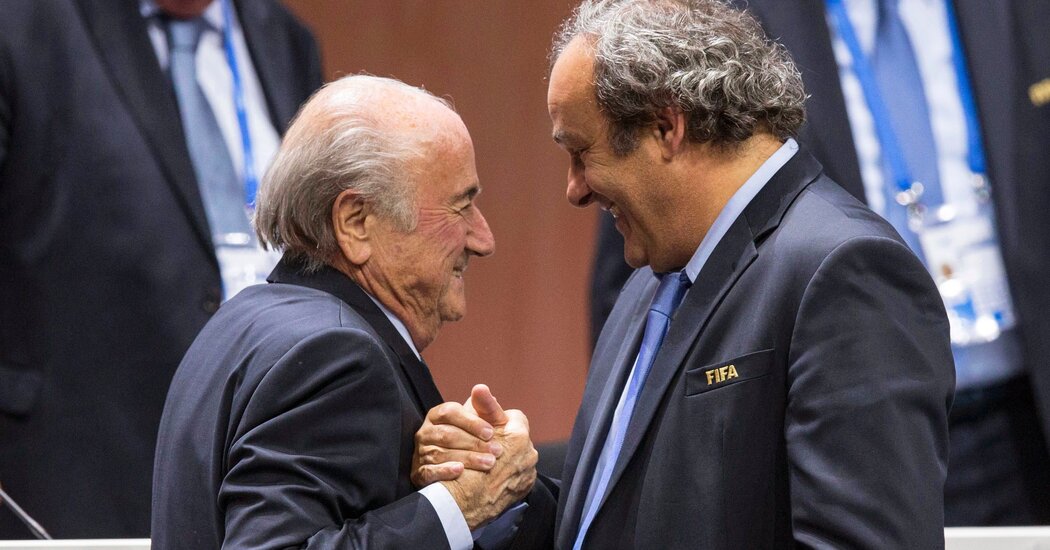 More than six years after being ousted in a sprawling soccer corruption scandal, the former FIFA president Sepp Blatter and his onetime ally Michel Platini were indicted on fraud charges on Tuesday by the authorities in Switzerland, who accused the men of arranging a secret $2 million payment.

The office of Switzerland’s attorney general accused Blatter of unlawfully arranging the $2 million payment in 2011 to Platini, who was then the head of European soccer’s governing body, UEFA. The criminal charges for fraud, criminal mismanagement and forgery follow a yearslong investigation into the payment, which came to light in 2015 after prosecutors at the United States Department of Justice revealed corrupt practices at FIFA dating back at least two decades.

That investigation resulted in the arrest and conviction of dozens of powerful soccer officials and marketing executives on charges that included racketeering, wire fraud and money laundering conspiracy. Blatter was not charged at the time, even as the scandal brought down most of FIFA’s top leadership.

Blatter has for years been the subject of various investigations, but Tuesday was the first time he had actually been indicted on criminal charges. It may not be the last time. Prosecutors are still looking into a $1 million loan that FIFA made in 2010 to the Trinidad and Tobago soccer federation that was quickly written off by Blatter. The Trinidad federation was then headed by Jack Warner, a former FIFA vice president who has been fighting extradition after being named in the 2015 U.S. indictment.

The $2 million payment to Platini came as Blatter faced a challenge for the FIFA presidency from a Qatari billionaire, Mohammed bin Hammam, who at the time was head of soccer in Asia. Blatter and Platini both maintain the money was a belated payment related to work that Platini, the captain of France’s 1984 European championship-winning team, had done for Blatter after he was elected FIFA president for the first time in 1998.

Both Blatter and Platini already have been sanctioned for the payment by FIFA’s own disciplinary system, though their original bans were later reduced on appeal.

Swiss prosecutors said their investigation found the payment to Platini was made “without a legal basis.”

The Swiss indictment against Blatter, 85, comes as he battles ill health. He has been hospitalized several times since being forced out of his leadership post.

The Swiss attorney general’s statement announcing the charges did not say when a trial would be held. Blatter said he was optimistic that he would be able to clear his name, using a statement to repeat his claim that the payment was based on a verbal contract with Platini and that it had been delayed because of financial constraints at FIFA at the time it was agreed.

“The operation was correct as a late wage payment,” Blatter said.

Platini, who said he learned about his indictment from news reports, vowed to “fully challenge these unfounded and unfair accusations.” He also accused Swiss prosecutors of colluding with FIFA’s current president, Gianni Infantino, and of a “relentlessness to want to unduly implicate me in a case in which my entire good faith had been recognized.”

While prosecutors in the United States have so far clawed back tens of millions of dollars and won convictions against prominent defendants in their case, efforts by the Swiss authorities have yielded very little.

A case against top German officials accused of bribing officials to secure rights to stage the 2006 World Cup was forced to end without a verdict last year when a five-year statute of limitations expired. At about the same time, Swiss prosecutors failed to prove their case against a top Qatari official who had been charged with bribing FIFA’s most senior administrative official — another Blatter confidant — in an effort to win lucrative World Cup television rights. The FIFA official, Jérôme Valcke, though, was found guilty of a lesser charge of forgery even as he was cleared of accepting a bribe.