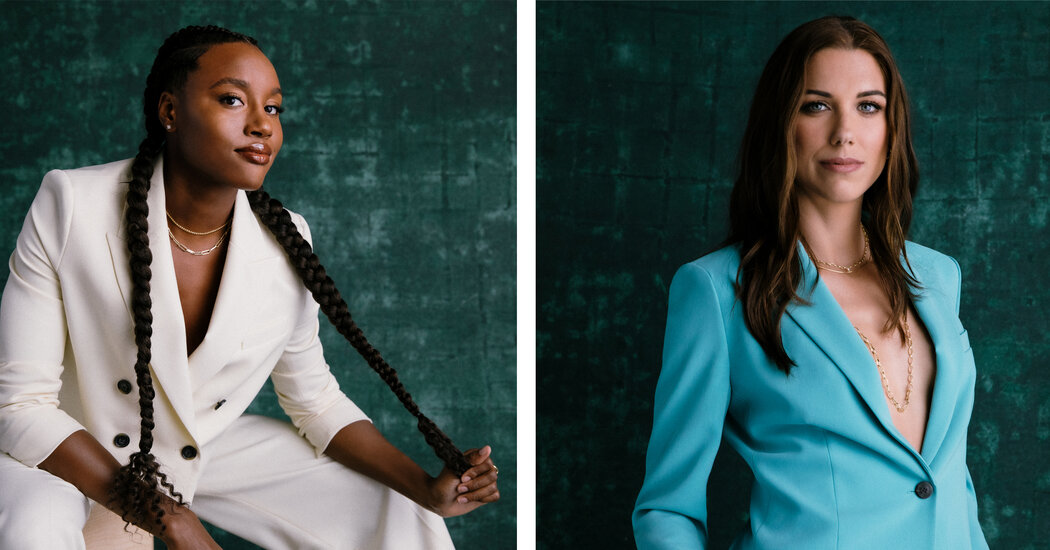 “Growing up I didn’t have posters of female athletes, which wasn’t because I didn’t watch sports,” Morgan said. “I just didn’t know enough about female athletes to put them on my wall and idolize them.”

Female athletes can also be more interesting subjects than male athletes, in part because they have to be. Million dollar salaries, commonplace in men’s sports, are all but absent from women’s sports unless your name is Serena Williams. They have to fight for scraps of attention from the media.

Robertson says TOGETHXR will be an “identity” brand, which she says will speak to the idea of young women as “multi-hyphenates.” “Alex is not just incredible soccer player but a mom, activist, business person and scholar,” she says.

Women’s sports, through no fault of the athletes, are also inherently political and politicized, much like women’s bodies. To Manuel, who spent much of the pandemic training for the upcoming Olympics in a backyard pool, all of the complicated ways in which women must navigate through sports and the world means they are “bursting at the seams to tell these stories.”

It might also mean they have more interesting stories to tell — Manuel wants to tell stories about Black hair, mental health, minorities in swimming and perhaps cooking — than male athletes who might begin focusing on a multimillion dollar career when they are 14 and begin media training at 16.

“Being a woman, you are told you are too much or not enough of any one thing, all the time, especially in sports,” Manuel said. “It is a consciousness that isn’t even ingrained, it is a byproduct. If we are talking literal financial opportunities, you have to dimensionalize yourself because there isn’t enough respect for women athletes and their athletic performance.”